Many, including us, thought that the introduction of Google Maps might lead to a rapid uptake in iOS 6 adoption, the idea being that many were holding out in order to keep Google’s offering as the default on their iPhones, iPads and iPod touches. But Chitika, a mobile ad network that regularly tracks iOS adoption rates based on devices accessing apps using its platform, has found negligible impact on how many users have upgraded a day and a half after the Google Maps release. 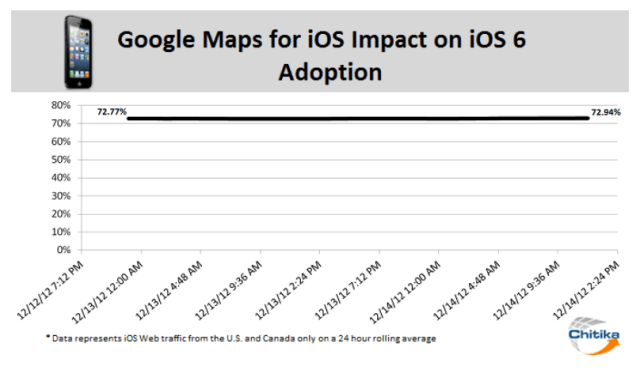 Chitika’s data shows that of users accessing its network, the average number using iOS 6 went from a very high 72.77 percent when Google Maps was released at midnight ET on Dec. 13 to a very slightly higher 72.94 percent as of 2:24 PM on Dec. 14. That difference is slim enough that Chitika says there was “no immediate impact” at all on iOS 6 adoption rates vs. the existing trends the network has been seeing. There was virtually no difference, let alone a dramatic spike. The takeaway? While a vocal minority may have claimed that they were holding out for a dedicated Google Maps app before upgrading, it seems that overall, many had decided to already take the iOS 6 plunge long before the app’s arrival.

Of course, Google’s Maps app for iOS was hardly the best kept secret in the world: rumors that it was arriving before Christmas had already surfaced the day after iOS 6’s release, and later reports only seemed to confirm we’d see something from Google hit the App Store before the end of the year. Chitika saw considerable increases in iOS 6 adoption between its last study in October 2012, when adoption was at 61 percent, and this most recent study, so it’s entirely possible many users had already updated, figuring there was no reason to delay further if Google was indeed planning on delivering its own app relatively soon.

It’s also possible that we’ll see adoption rates spike in the near future as more people become aware of Google Maps being available, but I’d argue that the app is hardly keeping a low profile, given the media attention it received over the past few days, and the fact that it quickly skyrocketed to the top of the iPhone app charts. Still, the fact remains that based on this data at least, it looks like the perception of masses of iOS users hunkered down and refusing to update before Google Maps returned may have been more figment than fact.