Well, Google+ is playing coy at the end of the year, aren’t they? Today, Google launched a year-end “blow-out” of features for users of its social layer. Eighteen new features. But they’ve completely blown up its iOS app.

The earlier features were nice enhancements to all of its core functionality, making Google+ a cooler place to say, rather than dip your toes in once in a while, which is how I happen to use it, and why I like it a great deal. But at the end of the day, engagement is the name of the game.

My favorite feature in this new iOS version has to be the new way to share links with the “Link” button, because sharing a link to say, a blog post, was a major hassle before. Also, the Photo button. You might have noticed that big and featured “Check-In” button, if not, I’m sure that Foursquare did. Google clearly wants you to share your location more, and has surfaced it more prominently. That’s a smart move, as a big part of social behavior, along with the “Circles” approach to privacy, lends itself to letting people know exactly where you are. Search is prominently featured, as it should be, since it’s Google.

So basically, they didn’t stop with this morning’s announcement. Here’s some grandstanding for you, if you’re into that sort of thing.

This is what Google’s Dave Besbris had to say:

On iOS, our new version lets you swipe through photo albums inline; you can tap once to view photos in all their glory; and the iPhone app now applies a subtle pan-zoom-scale effect to pictures in the stream. You’ll also see new conversation cards that really shine a light on your content—from longer snippets to bigger photos to comments that slide in beneath each post.

Additionally, the recently launched Communities feature has been added to the app, which was clearly going to come sooner than later, luckily it was the latter. 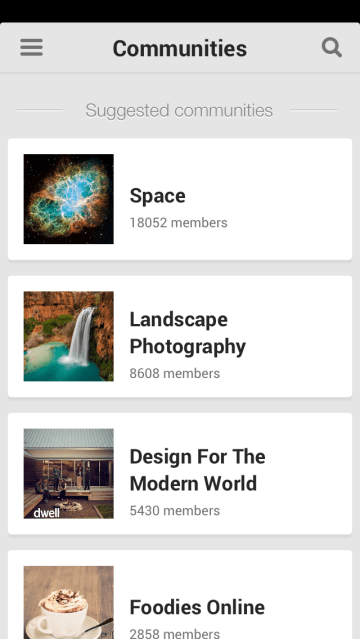 Of course, Google’s Vic Gundotra got his own words in on the launch double-dip, and he’s happy about it: 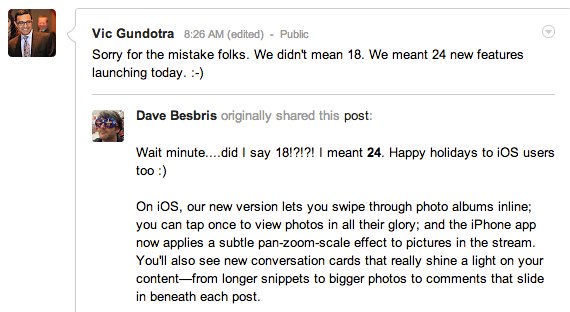 Google+ paved the way for the beautifully designed new Gmail and Maps app for iOS, a “look” that Google has quickly owned, and is very distinct. This new update for iOS is even “Googlyer” in design. 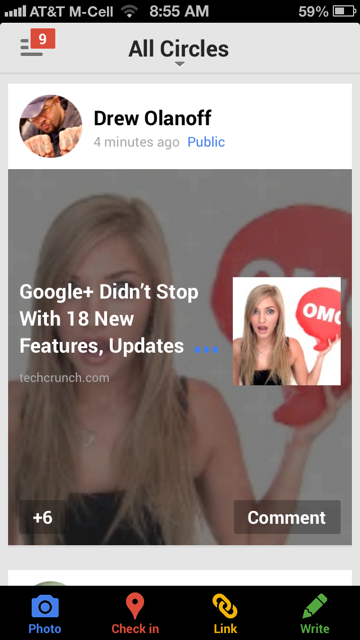 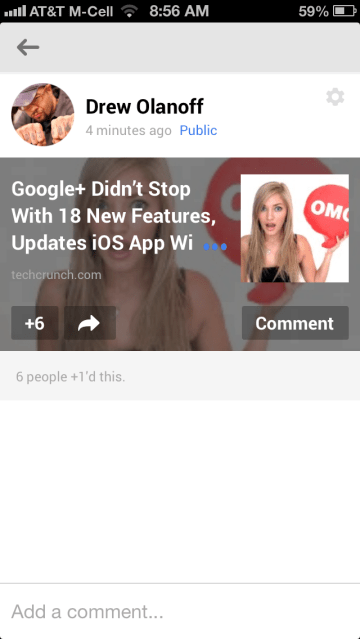 Down to the colors on the navigation, as you can see. Want some more “attention to detail”? Check out the loading animation: 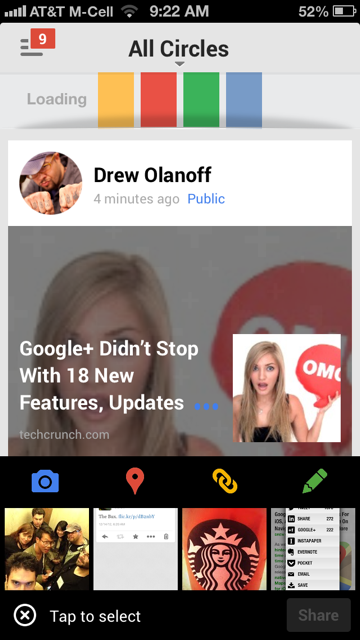 Holding out until right before the yearly Apple App Store “Freeze” is smart, because these changes will be on the top of people’s minds as they get their new iOS devices this year for the Holidays.

Get the new iOS update here, before it fully does its “propagation” thing that we’re now all so used to.

Want the full list of Google+ goodies released today? Here you go. And if you’re wondering about numbers on Google+, they’re doing just fine. It’s not a social network, it’s a personal one. Personal choice is a wonderful thing.