Google Maps has already flown to the No. 1 spot in the Apple App Store after being available for one night. The app is the top free app in the App Store, overtaking YouTube and two games, Fun Run and Interlocked.

Interestingly enough, Apple isn’t featuring the Google Maps iOS app in its special Maps-related Featured section. The company first introduced the “Find Maps for Your iPhone” Featured section just after iOS 6 was released and the world realized just how flawed Apple’s Maps are.

After releasing a public statement on the matter, from Tim Cook himself, Apple gave its Map competitors a fair shot in the App Store. However, it would seem Google doesn’t get that same treatment.

Of course, Google Maps doesn’t need it. Google Maps on mobile web undoubtedly became more useful in the past few months, but with a full native app in the App Store, the search giant clearly needs no help at all jumping to the front of the line.

A full rundown of the new and improved Google Maps can be found here. 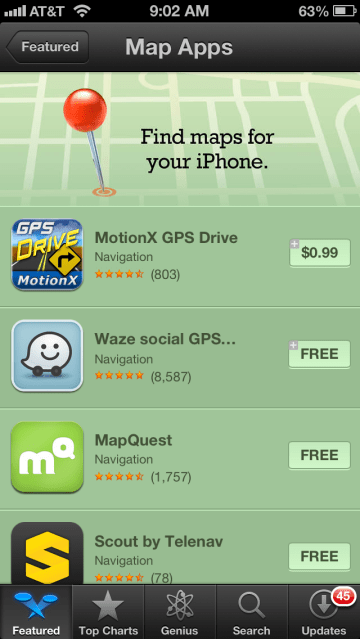