At Dell World in Austin, Texas, today, President Bill Clinton delivered a keynote address discussing the importance of collaboration and how society needs to get into the tomorrow business.

Silicon Valley, the startup community, big data vendors — all of them are in the business of tomorrow. All of these communities live in the future. But only slivers of society are showing signs that we are preparing for it. Clinton cited recent studies that show fourth graders are now just behind South Korea and Singapore in math and science test scores. That’s a good sign but compare 11th grade test scores and there’s a gaping difference.

Clinton said the U.S. non-defense discretionary budget continues to get cut. R&D is part of that budget. Clinton said that President Barack Obama, in a tough spot, is proposing that R&D go below 3 percent of the total aggregated U.S. budget. According to the Center on Budget and Business Priorities, discretionary spending is at a historic low. In 10 years, discretionary funding has decreased by $1.5 trillion.

That means less funding for university research and less money in our future overall. That’s a problem when you consider that countries such as Singapore is putting $5 billion into biotech with the goal of supplanting the United States.

“They are living in the future,” Clinton said in a discussion with Michael Dell about Singapore and South Korea. 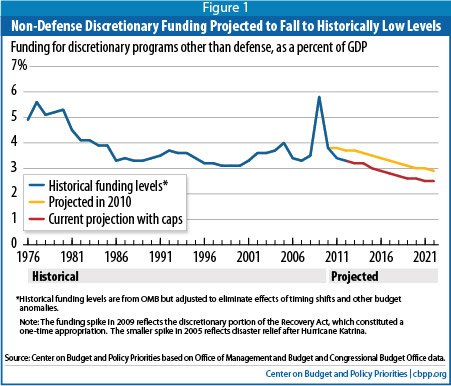 Clinton started his keynote address by saying that he sent two emails during his presidency. He has said this before, but it helps to illustrate here at Dell World how far communication has come.

The development of email and the Web formed the foundation for today’s collaboration technologies. Clinton is saying that collaboration is not just for geeks. It’s needed for a host of problems: getting out of debt, developing a national broadband policy, providing more funds to schools — the list goes on. But there’s something more here.

If we don’t collaborate to get into the tomorrow business then someday we will certainly be living in the past.