To go along with its brand-new, built-from-scratch iOS Maps app, Google has released a new SDK that will allow developers to utilize its service within their own apps. The key is that the SDK allows access to a URL scheme that lets you call up the app from anywhere you like within your own.

Say you have a contact management app. If you surface a person’s address, you could choose to launch Google Maps by default, rather than Apple’s iOS 6 offering.

The SDK features vector-based maps that load quickly, allowing users to easily navigate 2D and 3D views, rotating and tilting the map with simple gestures inside your app. Developers can also change the Google maps view to include information such as traffic conditions, and control camera positions in 3D. Access to API keys is being progressively rolled out to developers who register interest.

Yes, along with calling up the app, it can be fully woven in, so if you have developed an app like Foursquare, you could choose to use all of Google’s real-time data, information and graphics.

Tapping a routing button within any type of app can fire off Google Maps: 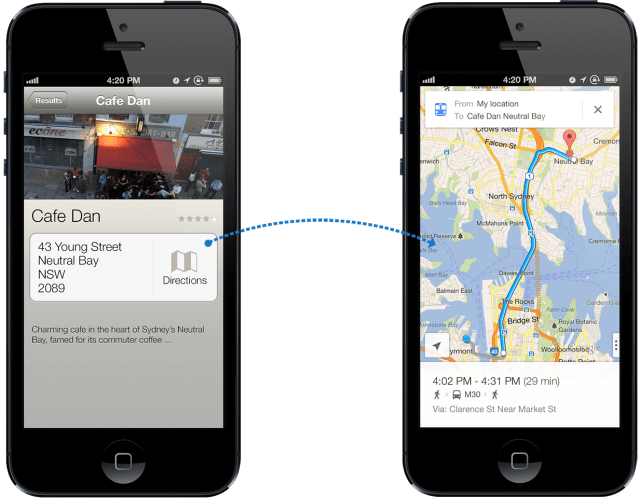 The SDK documentation, along with URL scheme instructions, are available on Google’s Developer site now. Sadly, developers will have to register for API access, which means that there’s no telling how long it will take to see our first apps with Google Maps woven in. Of course, it’ll be after that Apple App Store “Holiday Freeze,” so look for them in the New Year.

Choice is good for developers, but most importantly, for consumers.