At this point, having a Facebook account is basically a requirement for staying in touch with friends and being on the Internet. Sure you could delete your account, but people who would have messaged, wall posted, or invited you to events won’t always go the extra mile to contact you some other way. You’d also be unable to sign up for many services, or otherwise have to endure manual sign-up flows and unpersonalized, unsocial experiences. 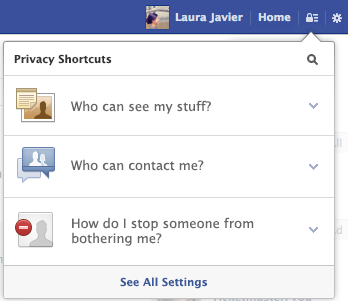 You might keep your profile biography incomplete, preventing Facebook from targeting you with ads based on your hometown, current city, workplace, or relationship status.

And you definitely won’t toggle your privacy settings so you can share especially sensitive information with small sets of close friends and family. That’s highly relevant content that draws people to check Facebook frequently and read the feed thoroughly.

This is why Facebook is overhauling its privacy controls and adding more privacy education. It has to give people a better understanding of how their controls work. It can’t afford to have users scared. Satisfactory isn’t satisfactory anymore. It needs us to be downright comfy with our privacy controls.

To that end, it just launched Privacy Shortcuts. They let you instantly control who sees your content and who can contact you, as well as block people right from the Privacy Settings drop-down that’s always at the top right of the screen. Privacy and security settings can now be found side by side in the Account Settings. Instead of giving mobile apps the right to publish to Facebook in order to install them, apps must wait until they’re about to share on your behalf for the first time to ask for permission.

Facebook has removed the ability to not appear in search results so you’re not fooled into thinking strangers can’t navigate to your profile just because you’re not in search. For instance, if they find one of your friends and look through their friend list, they’re one click from you.

The Activity Log where you can hide things that appear on your profile now has more ways to filter all your shares, and a way to hide or report multiple items at once. Finally, it’s improved the social reporting tool to help you ask friends to delete those embarassing or offensive posts and photos of you.

Most importantly, Facebook will show you in-line reminders of who you’re sharing with. These tips are critical to Facebook’s future because they ease us into the concept of sharing more with fewer people. This is the key to Zuckerberg’s Law Of Social Sharing:  Y = C *2^X where X is time, Y is what you will be sharing and C is a constant. Not only will you share a wider variety of content more frequently if you share to small sets of friends, but sensitive content and anything you explicitly pick the audience for is almost sure to be more interesting to those people than the average post. 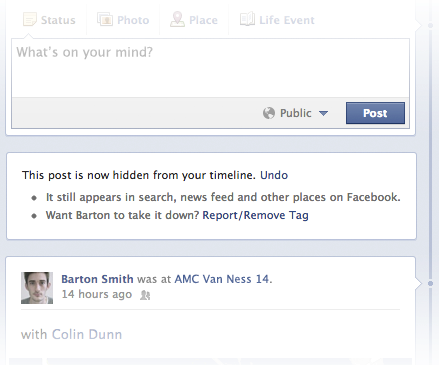 The company has had limited success in getting users to create and share to custom friend lists in the past. In late 2010 it admitted only 5 percent of users had tried friend lists. So it launched Groups, which made it extra obvious that you were sharing with a subset of people and not your entire feed. That simplicity has kept the feature popular.

But the right micro-audience isn’t always in a single group. You might want to only share a message of desperation about long hours at your job or photos of your baby with your family, best friends, and childhood buddies. These people don’t necessarily know each other, so they don’t fit well in a group.

Facebook wants you to use the audience selector drop-down to choose exactly who you share with. It can get people accustomed to doing this with no fear that their sensitive posts might reach the wrong people, micro-sharing will soar, and it will have plenty of highly relevant content to attract us to the news feed. 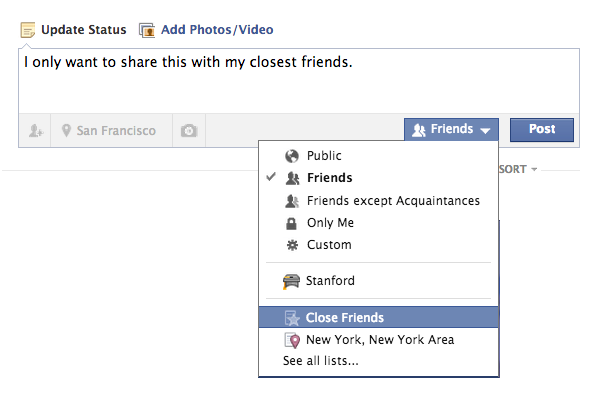 The social network still has a hole to dig itself out of. Despite having by far the most robust privacy controls on the web, some early fiascos and the complexity of those controls still make people feel uneasy. It’s also competing with Google+ and Path, both of which are built more fundamentally around micro-sharing.

When you see more privacy education in the New Year, it’s not because Facebook was ordered to provide it by privacy regulators (though it was). And it isn’t because Facebook doesn’t want people to be more philosophically open and connected (though it definitely believes in that, too). It’s because Facebook is in the advertising and payments business, and those businesses rely on volunteered personal data, and you’ll only give it the really juicy content and info if you’re sure about who will see it.