Real-time news alert service Owlin (a recent graduate of the Amsterdam, Netherlands-based Rockstart.Accelerator), has raised $250k in seed funding from NoRo Venture Capital — funding that will be used as the startup aims for a Q1 2013 launch.

Targeting financial institutions and governments, Owlin claims its algorithms are able to extract “actionable intelligence” from social media, newswires and Tweets, essentially analysing news in real-time to give users a heads-up on important, breaking information. Thus, enabling them, for example, to gain a “better understanding and faster response in case of strikes, high-impact publicity or disasters.” And certainly for traders it’s easy to see how a real-time news advantage could be mission-critical. In this way the startup’s proposition reminds me of DataSift’s recent march on Wall Street, although it appears to be very early days for Owlin, with the product in closed Beta, targeting a full launch early next year. 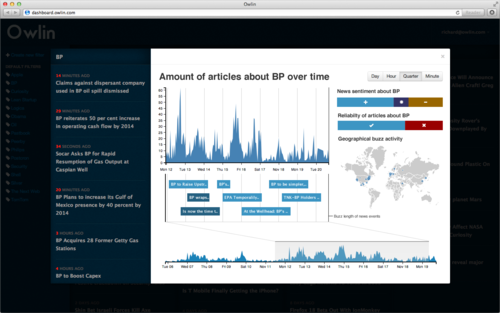 However, that isn’t stopping the startup making lofty claims. According to the PR, its technology will enable Owlin to “deliver bottom-up news 10 to 15 minutes before Bloomberg or Reuters.”

But perhaps I shouldn’t be quite so cynical. Two of Owlin’s young founders certainly have some decent coding chops. After deciding at the 11th hour to enter the TechCrunch Disrupt San Francisco Hackathon, Richard Kraaijenhagen and Bas van Ooyen, both 20 years of age, ended up winning first prize from Dropbox for the most innovative use of, err, DropBox, with an app they built in 24 hours.