Back in September 2011, Farmigo took the stage at TechCrunch Disrupt and launched its site for discovering and enrolling in Community Supported Agriculture programs (where you can sign up to receive boxes of fresh produce from local farms). Ultimately, however, founder and CEO Benzi Ronen told me the CSA model only works for “1 percent of the population,” while the company’s mission is to make “healthy, fresh food available to everyone.”

That’s why Farmigo has launched a new program called local food communities. It has been piloting the idea with a few companies in San Francisco and New York, and as of today, organizations such as offices, schools, and community centers in those two cities (and more soon) can sign up. The goal, Ronen said, is to take the farmer’s market concept and make it much more accessible, so that it isn’t just open for a few hours on the weekend, and you don’t have to travel across town to reach it.

Instead, each community has access to a group of local farms. To order food from those farms, customers just visit their dedicated Farmigo site, where they can buy things like (to quote the company’s description) “seasonal fruit, vegetables, eggs, meats, fish, bread, cheeses, and even wine and coffee.” Then the food is delivered to the community location within 48 hours of harvest. In other words, Ronen said, it’s a way that Farmigo can “bring the farmer’s market experience to you.” 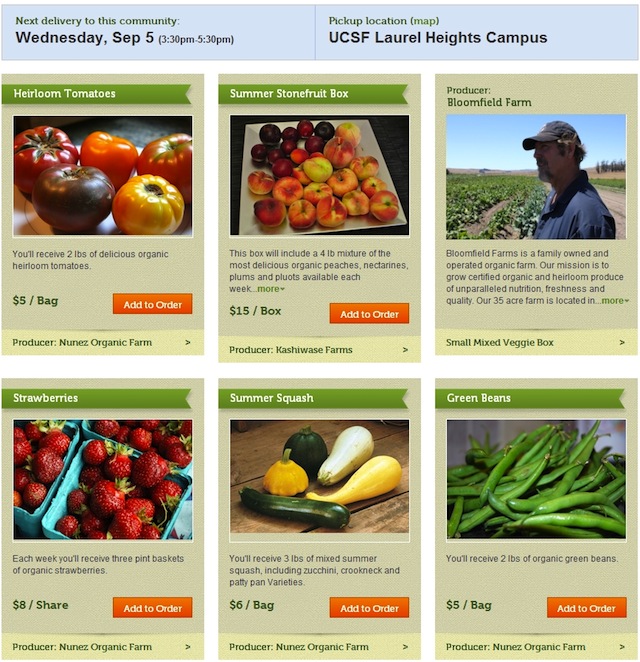 Ronen added that it’s important for these programs to go through specific organizations, rather than a more loosely defined “community” — that helps with things like logistics and security (your office may not want random people dropping by to pick up their food). He also compared the idea to the Kickstarter model, where businesses (in this case farms) get a certain amount of commitment from the community upfront so they know that serving a given customer base makes sense. Ronen said you probably need a 100-person office or an 80- to 100-family school in order to be big enough for a local food community to work — though there are exceptions. He also suggested that startups sharing an office could band together to create a community.

Ronen is hoping that food evangelists will be the ones who bring the programs into their communities, and then they’ll spread from there.

While I like the model, I asked if it’s really going to reach a mass audience. Ronen’s stated goal, after all, is 20 percent of the total population. He argued that by participating in Farmigo, people who are concerned with the industrial food system can “become part of the solution.” And if appealing to your altruism isn’t enough, he also said that Farmigo will become even more useful in the future, where it’s not just making shopping from local farms easier, but meal planning, too.

The companies piloting the program include Etsy, Kiva, and Carrot Creative (a 40-person digital agency that’s seeing 75 percent adoption, thanks to company subsidies). You can see a food delivery at the Carrot Creative office in the video below.

Farmigo is also announcing a new $8 million Series B round of funding led by Sherbrooke Capital and RSF Social Finance, with participation from past investor Benchmark Capital. The company has now raised a total of $10 million.

Carrot.is/Harvesting from Carrot Creative on Vimeo.