The mobile payments space already has its fair share of players, but lately some new names have been making big waves (like LevelUp), finally taking on veterans like Starbucks. The coffee giant recently inked a huge partnership with Square, which will bring the payments processors to 7,000 coffee shops across the U.S. But a few of the people behind Starbucks’ successful payments system have today launched another mobile payments option: Cardfree.

Cardfree is a mobile merchant platform that wants to make it easy for small businesses to drive traffic into their stores, increase incremental visits, ticket size and allow for more meaningful engagement. It accepts payments from mobile devices, browsers, or at the point of sale.

Small business owners can offer personalized promotions, mobile payments, loyalty, order-ahead and social media engagement, backed by reporting and analytics that lets them see whether it’s working. Another big appeal for merchants: Cardfree allows them to create digital payment cards (prepaid) that are compatible with 90 percent of point-of-sale systems on the market. This means that, like LevelUp, the startup’s mobile payments system isn’t tethered to one particular technology.

To help it drive adoption and get its payment system into the hands of merchants, the San Francisco-based company also announced today that it has raised $10 million in series A financing, led by Jeffrey Katz, who founded well-known payments processor, Mercury Payments Systems. Katz also serves as the chairman of the board for Cardfree.

Part of the reason for its sizable series A raise is due to Cardfree’s veteran leadership, starting with CEO Jon Squire, who is the former CMO of CorFire, where he led the mobile efforts of Dunkin’ Donuts. He also formerly led Starbucks’ mobile team as the SVP of Payments at mFoundry, which spearheaded Starbucks’ mobile payments app. Cardfree’s executive team also includes COO Dustin Young, who spent more than seven years at InComm as VP of product strategy, and product lead Chuck Davidson, who, along with Squire, CMO Diane Hong and head of architecture Sen Wen, helped conceive of and launch Starbucks Card Mobile.

Squire said that he believes the company has a leg up on the space by bringing together a team that helped create the “gold standard in mobile commerce deployments” and will focus on its primary goal of leading “merchants to new levels and ensuring that they remain at the center of their customer relationships, rather than being secondary in third-party mobile apps or wallets.”

For Cardfree, the merchant “is the most important piece of the omni-channel ecosystem, and we build our platform around that belief,” Squire said.

Squire said that the team has been hearing from merchants that many are tired of being overloaded by requests from third-party payment processing startups, which, in the end may not have the best interests of the merchant at heart. Instead, their focus is to scale as quickly as possible and spread their own brand’s message as a result.

Like LevelUp, Cardfree is a white-label platform, which allows merchants and vendors to personalize and rebrand the system according to their individual use, while collecting a variety of data points on their customers to ensure that they have access to competitive intelligence and trending information, both for the market at large and across their customer base.

The mobile payments space has become extremely competitive over the last few years, and thanks to Square, LevelUp, PayPal and just about every one of the major credit card companies, there’s plenty of action. LevelUp has seen increasing adoption of late on the back of its effort to become the Android of the mobile payments space and by eliminating credit card processing fees for merchants.

If Cardfree is going to be successful, it will have to move quickly to begin partnering with local vendors and merchants. We’re getting close to a point where it’s no longer “early” in the payments game, as merchants are beginning to choose favorites, regardless of whether they are “payment agnostic.” Squire will be able to leverage the work that one of his other portfolio companies, Snapfinger, has done of late, having already achieved integration with a number of poin-of-sale systems.

Cardfree is another viable entrant into the space, but it still has a lot of work left to do and the clock is ticking. 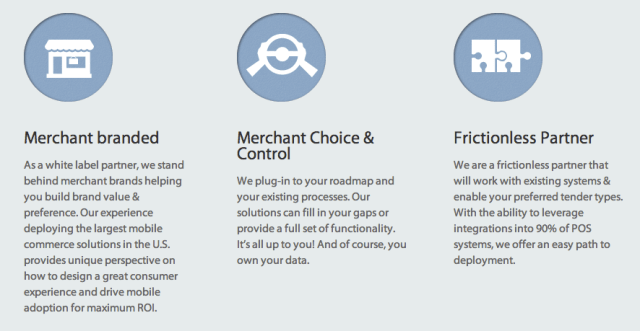