Data visualisation startup Qunb just won the LeWeb Paris 2012 Startup Competition. Second placed was data-over-2G mobile startup Be-Bound, and third place went to mobile app Recommend. Qunb offers a platform for businesses and individuals to visualise their data sets — by creating charts and graphs — and compare them with other similar data sets. The startup talks about “changing the universe of big data”.

The judges were skeptical about Recommend’s business model, while they thought Be-Bound has “huge global potential” — if indeed they can make a business out of what they do. Of the three, though, Qunb’s data visualisation technology and potential market stood out as the most promising. That said, the judges conceded they did not understand all of Qunb’s technology — and noted that they were not involved in the competition’s shortlisting process.

The competition started with a list of sixteen finalists that pitched their products in front of a group of venture capitalists, journalists and successful startup founders. The top three companies from these sixteen finalists then got a chance to present their companies on the main LeWeb stage this afternoon. All three finalists are French startups.

Here is a short summary of what the three finalists do: 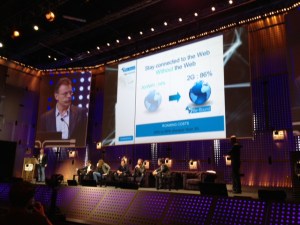 Be-Bound: This service provides users with an application for smartphones that lets users save on their bandwidth costs by using SMS and 2G instead of 3G. The company also argues that it can save international travelers by letting them use SMS messages to move data. The app offers built-in meta applications, including ones for email, SMS, weather and the web. There was quite a bit of confusion among the judges about how the service actually works and whether there is a big enough market for this product. According to Be-Bound’s CEO, the company can reach over 100 million euros in sales by 2016.

Qunb: This big data startup allows companies and individuals with data to syndicate it on its site, visualize it and correlate it with other data on the service (like weather data etc.). The founders say that the service semantically understands the data it ingests and is smart enough to pick the right visualizations and correlations. Ideally, users will give the service a lot of data to work with, but some of the judges were skeptical that enough users would be willing to give the service their data. This startup, too, somewhat confused the judges as it wasn’t quite clear if Qunb was going for a B2B or B2C business model (they seem to be trying to do both).

Recommend: Mobile app Recommend wants to provide you with recommendations from people you trust. The team argues that it’s different from other services — such as restaurant recommendation service Zagat — as it covers over 80 topics, including shopping, restaurants and even conferences. We are honestly confused what’s new here compared to other recommendation services that tap into our social networks but the startup talked about wanting to create a one-stop-shop for trusted recommendations from friends and also potentially experts in each area. Its business model is attached to lead generation for the businesses being recommended.