The founders behind Karma (no, not that Karma) think that there’s something fundamentally broken in the market for mobile providers. And they’re hardly alone. So, the TechStars grads set out to create a new format, one that eschews the traditional subscription model for a pay-as-you-go approach to mobile bandwidth.

In an effort to realize their vision of providing anyone and everyone with a 4G, mobile Hotspot for their pocket, the startup is today officially launching its $79 hotspot device that comes with 1GB of free bandwidth and is available for purchase on YourKarma.com.

The 4G and WiFi-capable Hotspot is about half the size of a smartphone (so it does indeed fit in your pocket), comes with a range of six to eight hours of battery life, is capable of speeds of up to 6 megabits per second (Mbps) and can facilitate up to eight open connections at once. Additional bandwidth costs $14 per gigabyte and “never expires,” according to Karma co-founder Robert Gaal.

But, what the founders believe sets their Hotspot package apart is that it introduces the concept of “Social Bandwidth,” meaning that the device and its network are social right out of the box. The more you share your connection with people, the more bandwidth you earn. Right from purchase, Karma’s open WiFi signal is individually branded to its owner — “Rip’s Karma,” for example — and allows owners to earn 100 megabytes of free data each time they share their WiFi network with a new user.

This also works both ways, as the new user is gifted 100 megabytes of free data so that they can get up and running on the network for free once they sign up for an account. Say what you will about this “Karmic loop,” but in the stodgy old world of mobile providers, it’s an innovative business model and approach to user acquisition. 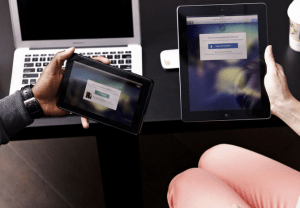 So, just in case it’s not clear, here’s how it works: I buy a Karma 4G, WiFi Hotspot, which has eight hours of battery from a single charge and works just as fast as WiFi connection any in my local area. Once the device is received, I create a Karma account (sign in via Facebook) and immediately given 100MB of free bandwidth. If I go over that limit, I pay $14 for each additional GB of data I use.

Sure, it’s not unlimited, but it’s competitive with other mobile plans if you, say, end up using 5GB of data, as that comes out to $70. If you don’t use that much, you pay less, and if you happen to go over that 5GB, you don’t have to deal with overage charges, which is a breath of fresh air.

Once I’m set up, I head to my local coffee shop, where Karma’s open WiFi network is bound to find some poachers. If those thieves sign up for Karma via Facebook, they too get 100MB free (as do I) attached to their Facebook ID. Even if they don’t have their own Hotspot, they still get free access to WiFi, and since, as the admin, I see the incoming WiFi connections and their Facebook profiles, I have the opportunity to do a little social curating, disapproving if I see something I don’t like. What’s more, the poachers can buy 1GB of data if they go over the 100MB limit right through Karma.

As to who’s powering Karma’s 4G? Karma operates as a virtual provider on the Clearwire broadband network, which serves approximately 135 million people across the U.S. in 80 cities and Simplexity (an authorized MVNA for Clearwire) provides access to the the company’s 4G network. 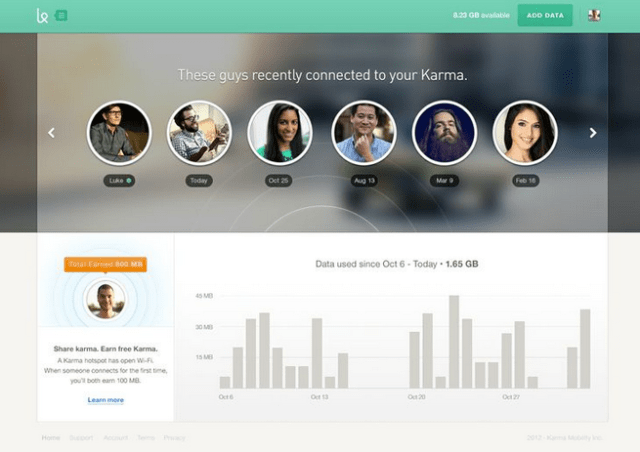 It’s a very interesting time for Karma to be entering the space, especially as the big mobile service providers are increasingly choosing to offer shared plans and, really, becoming data brokers — that’s their core revenue stream. If it’s true that the average smartphone user consumes about 220MB of data per month, then that makes Karma a favorable alternative. Especially if one is a Karma owner, as it would only require sharing your WiFi network with a couple of other coffee shop dwellers to get a couple hundred MBs of free data.

While Karma is very much provider and platform agnostic, right now it’s only working with Clearwire. Going forward, it’s going to be key for Karma to partner with other networks to extend its national reach. However, it’s hard to imagine that the bigs like Verizon and AT&T are going to be jazzed about supporting the competition.

Nonetheless, there’s a big opportunity in the air, as GoGo Inflight Internet is sorely in need of disrupting. The company is in the early stages of a pilot with one of the largest airlines in the U.S., which will offer “free Karma hotspots to frequent fliers,” for example. Building out these partnerships could prove to be a great revenue stream and user acquisition strategy for Karma.