It would be easy to assume that Facebook Messenger or Apple’s iMessage are in a natural position to reach global dominance in smartphone messaging. But the reality is that the landscape looks very different and is very fragmented — at least for now.

There are plenty of apps, WhatsApp included, that have tens of millions of users or dominant marketshare in their home countries of Korea, Japan or China.

I pulled some marketshare data from Onavo, a Sequoia-backed company that has data compression and usage apps that a few million users have installed on their phones. They’re able to see active usage for hundreds of thousands of apps, and the company isn’t beholden to the same confidentiality agreements that many mobile analytics companies have with their developer clients.

The chart above shows the percentage of iPhone owners in every country that are active users of different messaging apps. This isn’t just raw installs or downloads. This is actual monthly active usage, which Onavo can see because it compresses and analyzes data flowing in and out of every app if a user has Onavo products on their phones. They have a sample size in the “single digit” millions of iPhone users for this data.

As you can see, WhatsApp has dominant marketshare in most European countries and is far ahead of Facebook Messenger in active usage. In Asia, the picture is far more complicated. Korea’s KakaoTalk is actively used on 88 percent of iPhones in South Korea. In Japan, NHN’s Line app is actively used on 44 percent of iPhones. We couldn’t pull data immediately on Tencent’s WeChat app in China because they use a custom HTTP protocol. (But we can pull it by the end of the week if readers are interested. We can also pull Android data, but it will also take longer.)

The other thing to note is that the U.S. is also kind of an anomaly. If you’re an American or Silicon Valley reader, the reason you may have never recognized WhatsApp’s large footprint is because Americans frankly aren’t that hot on chat apps. With the exception of South Korea, Russia and China (for the obvious reason that Facebook can’t enter China), pretty much every other country in this sample has a greater percentage of its users on Facebook Messenger than the U.S. does. American users are far more likely to rely on SMS.

So what does this mean? Smartphone messaging is and will stay fragmented at least in the near-term. KakaoTalk and NHN Line have very strong networks in their home countries of South Korea and Japan. Tencent’s Pony Ma said in September that their chat app WeChat had doubled in six months to 200 million users and Facebook certainly isn’t going to China anytime soon.

Is it possible that this could change in the long-term? Social networking on the desktop web started out very fragmented. StudiVZ held notable market share in Germany, Google’s Orkut did well in India and Brazil, VKontakte dominated in Russia, Mixi held strong in Japan and so on. One by one, they began to fall thanks to pressure from Facebook.

Today’s launch of a Facebook Messenger app on Android that doesn’t require an account will go a long way toward attracting mobile-only users in the developing world. Many of them are starting to pick up cheap Android devices and are signing up for data plans for the very first time.

They’ll have a slew of options to consider beyond SMS. 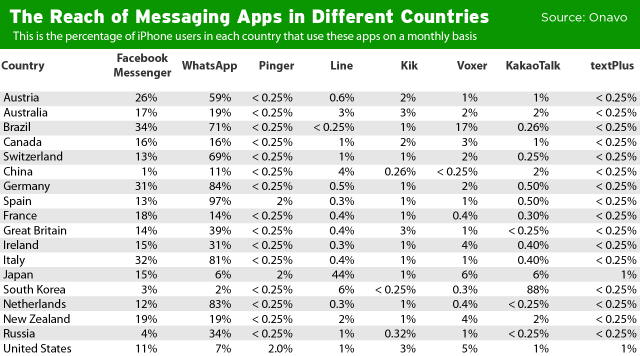