Teburu, a newly launched tablet-based online and mobile ordering system for restaurants, is now live with a handful of restaurant chains in the Southern U.S, including Gondolier Pizza, Pita’s Republic, and Little Greek Restaurant, and it has also recently signed a contract with a large, undisclosed Middle Eastern restaurant management company with 600 locations.

The company, whose name is Japanese for “table,” got off the ground in May 2011, following its win at the USF Fintech Business Plan Competition hosted at the University of South Florida. The startup is also one of the first success stories from the local incubator, Tampa Bay’s Gazelle Lab. 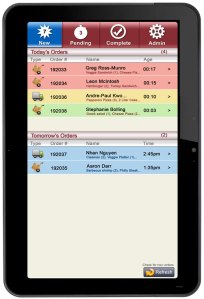 According to founder Greg Ross-Munro, who started Teburu with business partner Leon McIntosh, the idea for the company came from their own experience building software for restaurant owners at SourceToad, Ross-Munro’s Tampa-based custom software engineering firm. “We had to tried to do this before at our day jobs, writing code and systems, building websites, and writing mobile apps,” explains Ross-Munro, “but when we tried to work with the point-of-sale companies, they were just so expensive and so difficult to deal with. We said, there’s got to be a better way.”

With Teburu, the company offers restaurants a package which includes a 7-inch Android tablet and a mounting system that can be attached to the wall or at point-of-sale. The tablet runs Teburu’s software, which is hooked into the online and mobile ordering system tied to the customers’ websites. Teburu can either integrate the online ordering component into the restaurant’s existing site, or can build them a new site from scratch, if they prefer. 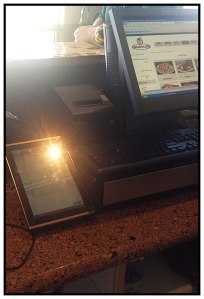 The basic plan for the online ordering system is $50 per month per location, while an upgraded plan for $120 per location per month also includes a custom app in the App Store as well as an in-store advertising system that can power digital displays at the restaurants’ various locations. This latter option involves an HTML5 app running in a Webkit-based browser connected to a TV screen of some sort. This app displays the restaurant’s digital menu and in-store specials, both of which can be updated on the fly by the restaurant owner.

For restaurants, Teburu’s system offers a more affordable alternative than enabling web transactions on their point-of-sale. “Not every company has the same kind point of sale, and not every company wants to deal with turning web transactions on which can cost up to $2,000,” says Ross-Munro. “Why pay a point-of-sale company a ton of money when you can have a $200 tablet that’s insured and sits or your desk and is going to keep getting better, unlike your point-of-sale system which is still stuck in 1975?” 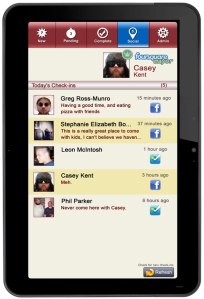 Teburu’s system, he points out, can be updated overnight via its internet connection. “You shut down your restaurant tonight, wake up, and go to work tomorrow and the tablet has been updated with the ability to scan Groupons right at the register,” he says. To be clear, Teburu’s system doesn’t support that Groupon-scanning option today, but one of its newer features (still partially in development) is a social component that alerts restaurants to the real-time check-ins from customers on Foursquare and Facebook.

Although generally it can be tough for new companies outside of the larger startup ecosystems like San Francisco and New York, for example, to gain traction, Ross-Munro thinks that, in Teburu’s case, Tampa is an ideal place to run this business. “In terms of strategic advantage, Tampa has more headquarters and more startup test restaurants that become chains and franchises than anywhere else in the country,” he says. Notably, restaurants headquartered in this region include OSI Restaurant Partners (Outback Steakhouse, Carrabba’s, Bonefish Grill, Fleming’s, and Roy’s) and Checkers/Rally’s, as well as the new startup restaurants from OSI vets, including Outback founder and OSI Chairman of the Board Chris T. Sullivan (Carmel Cafe) and Outback co-founder Bob Basham (PDQ), among others.

Teburu competes with other online ordering systems, like those from GrubHub, Seamless, ChowNow, OLO, Just Eat, and more, but Ross-Munro says that his company’s advantage is that it allows restaurants control over their brand. “In systems like GrubHub and whatnot, you kind of lose control over your customers – you’re going through someone else’s systems. Sure, you have to put your faith in our system, but it runs on your website. There’s no iFrame that gets loaded up – it’s your website,” he explains. “[Restaurants] want to own their brand,” he adds. “They would put their logo on a cocktail napkin – they’re that kind of people.”