Back in July, we caught up with New York-based startup NoMoreRack, a flash sales site that, unlike some of the most popular players in the space, isn’t relying on luxury products or fashion to drive traffic. Instead, the young startup offers everyday products at reduced prices — an average of 70 to 80 percent off everything from consumer electronics to clothing — in an effort to become the Walmart or Target of deals.

While there’s been a lot of consolidation in the flash sales and deals spaces over the last year, NoMoreRack has been moving in the other direction. In July, it reached 4.5 million subscribers, was selling 8K items a day and did $46 million in revenue during the first two quarters. Today, it’s grown to 7 million visitors/month, 5.8 million subscribers, is selling an average of 40K items/day and revenue is now close to $80 million.

Thanks to this growth, NoMoreRack is today announcing that it has closed a $12 million series A round led by Asian eCommerce giant G-Market. Ifty Ahmed, a partner at Oak Investment Partners, joined the startup’s board on behalf of G-Market. With its new capital, NoMoreRack founder Melina Ash tells us that the startup plans to continue adding to its staff of 30 and will continue to scale operations, particularly abroad.

As to how it works? NoMoreRack offers an average of nine big deals everyday, serving these discounted items to users at the top of its website — along with hundreds of other products. The sales begin in the morning and end each night. While most of the deals last 24 hours, the startup has expanded to offer more “events,” which are essentially longer-term sales, with durations of three to four days. It sounds like flash sales, but the NoMoreRack founders are quick to say that their end-goal is to become an eCommerce site, really an online shopping destination.

With its new funding, website and recent relocation to New York, NoMoreRack is trying to move away from a somewhat spotty reputation. As we wrote in July, at the outset, the site struggled with managing quality in buying overstock, discounted products and maintaining customer service — as a quick Google search will show you that customers have not always been thrilled with the NoMoreRack experience.

There have been a number of complaints of cancelled orders, damaged goods and poor quality, but to their credit, the founders have owned up to that and are making an attempt to go forward. After the site received customer complaints when it initially posted a penny sales auction, it quickly shut it down and is trying to repair a scuffed reputation, thanks to what seems to be less-than-sterling origins. To that point, the NoMoreRack co-founder tells us that 70 percent of its revenue comes from repeat buyers, which is a slightly more auspicious sign, though Ash did say that “there’s always room for improvement” when it comes to customer experience. Yes indeed.

Be that as it may, the site now offers full refunds along with a 30-day window to return items if users aren’t satisfied with what they get. It’s good to keep this history in mind, but with the rate of growth NoMoreRack is seeing and new capital to boot, it looks like this auction-turned-eCommerce site is going to be around for awhile. Nordstrom’s clearly thinks so, as they’re going after NoMoreRack for trademark infringement. 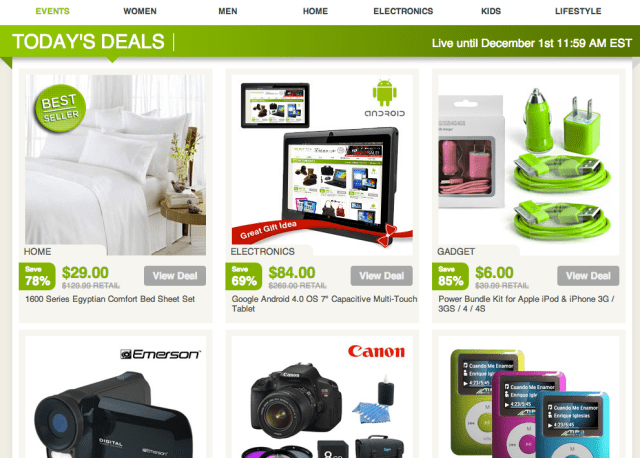