Shopaholics of the world, unite and take over. This past weekend, the first of the holiday shopping season, has already been breaking records for consumer online spend. Today comScore announced one more: Cyber Monday raked in $1.465 billion in online sales, making it the heaviest-spending day in U.S. e-commerce history. It was second only to this year’s Black Friday sales, which topped $1 billion.

Led by sales on sites from Apple to Zappos and back to Amazon again, consumers put any questions they may have had about the state of the economy to one side, and they spent like crazy.

ComScore says that the amount spent on that single day was a 17% rise on a year ago. That makes the rise on that one day marginally higher than overall gains for the holiday season to date: the analysts say that so far consumers have already spent $16.4 billion on holiday season purchases, up 16% on last year.

As befits its name, Cyber Monday purchases were heavy on consumer electronics and technology spend, with discounts on devices like the Kindle Fire from Amazon, and no discounts, but free shipping, at the Apple Store.

ComScore does not break out which categories saw the biggest spend of all, but it does point out who grew the most. Interestingly it was something nonphysical — digital content and subscriptions, which grew by 28% over last year.

However, if you consider other businesses as a point of comparison — say advertising — it’s often the product categories that are smaller and newer that grow the fastest (so in the case of ads, digital ads are growing much faster than overall advertising revenues, and mobile even more so, although both are much smaller than overall ad spend globally). In other words, it’s unlikely that digital content and subscriptions were actually the most popular products bought on Cyber Monday. 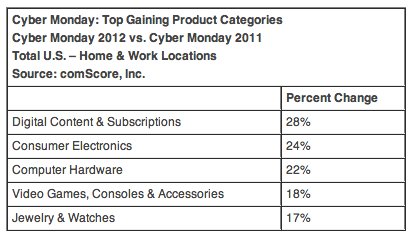 What’s interesting is that while Black Friday sales are buoyed in part by people having the day off work in the U.S., Cyber Monday is big precisely because it’s online, and so it becomes easier for people to shop while in the office. comScore notes that this is the first year, however, that spend from home and university computers outweighed spend from work computers at 47.2% compared to 47.1%. It also says that international users — perhaps more concerned about the economy and the price of long-distance shipping — spent about 1 percentage point less, accounting for 5.7% of sales.

While Cyber Monday was a record-breaker, it looks like there is more to come. comScore is forecasting even bigger gains, and more record-breaking, in sales in the weeks ahead. 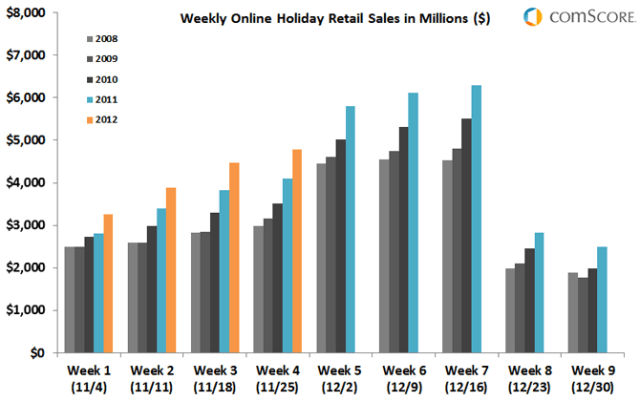