In typical Microsoft fashion, the company has announced a number of momentum numbers for Outlook.com and launched quite a few new features for its web-based email service at the same time.

Let’s start with the numbers: Microsoft says Outlook.com (formerly known as Hotmail), now has 25 million active users. Many of the service’s new users, Microsoft says, are switching away from Gmail.

According to the Outlook.com team’s numbers, one-third of Outlook.com users are active Gmail users trying the service for the first time. Microsoft also says that after talking to “hundreds of Gmail users for a panel, 4 out of 5 of these Gmail users said they would switch to Outlook.com.”

Here is what this panel told Microsoft:

It’s obviously hard/impossible to verify these numbers for us, so it’s worth taking them with a grain of salt. There can be no doubt, though, that leaving behind the tired Hotmail brand for Outlook.com and giving the service a new streamlined look surely helped Microsoft to get users of other services to at least try Outlook.com.

An Android App And Many New Features 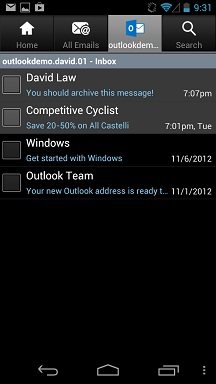 Besides these numbers, Microsoft is also announcing a slew of new Outlook.com features, including new customization options and color themes, keyboard shortcuts, one-click archiving and conversation threading, a feature that Gmail obviously helped to popularize.

Outlook.com users can now also switch between using “Reply” and “Reply all” as their defaults. You can find the full list of new features here.

Maybe most interestingly, Microsoft is also launching an Outlook app for Android (2.x and higher). Microsoft typically launches its mobile apps (besides its Windows Phone apps, of course) for iPhone first, but this time around, Android is getting the preference. There is a reason for this, though: Microsoft says that it is launching this app because Android devices “aren’t consistent in their native support for Exchange ActiveSync.”