Over the last few years, Amazon Web Services (AWS) has emerged as one of the most popular cloud infrastructure solutions out there, managing an unusual feat for those of its ilk by appealing equally to both early stage startups and enterprise. While it provides access to next-gen computing and hosting services for cheap and scales like a champ, the onboarding process remains tough for startups and enterprises often end up overpaying for functionality they don’t end up using.

Enter: Newvem. Officially debuting back in March, the Israeli startup set out to be the solution — literally — by helping businesses get more ROI out of Amazon’s cloud. Because cloud spending has the potential to be expensive if not optimized regularly, Newvem has been developing a platform that helps business managers, IT managers, dev ops “get to know” their clouds, providing them with more visibility into their usage and consumption by learning the typical behavior of its resources in order to identify trends, service level variations and anomalies and so on.

Since then, Newvem has been on a mission to gather as much operational data from as many different sources as possible in an effort to take the next step — to be able to proactively recommend where businesses should or should not be allocating resources to optimize spending.

As part of this mission to become the analytics-driven cloud management platform of record, Newvem today launched a new AWS analytics service that sees the startup for the first time turn away from cost-savings to focus instead on a solution that will allow it to impact profit directly through a top-down approach.

The service, which is now available in both free and premium versions, aims to help businesses get a better sense of whether or not their infrastructure is ready to scale or if, instead, they can reduce infrastructure to increase margins when revenues flatten or shrink. One of the keys to the new service is its ability to connect cloud usage with specific business activities and entities (like biz divisions, accounts and customers), providing companies with increased visibility into the relationships between their business and its cloud infrastructure.

To this point, Newvem Analytics also addresses specific roles within the organization by adding tailored views for CIOs, CTOs, IT managers, developers, etc. in an effort to enable each to make decisions that fit with their division’s specific goals. For example, its “CIO Cockpit & Managerial View is designed, as one would expect, for CIOs and other C-level execs and gives them a top-down business view and bottom-line visualization of cloud assets, costs and key performance indicators — as well as pinpointing particular areas of concern.

To round out its service, on top of its web app, Newvem is today officially launching a native iOS app, which allows cloud users to view cloud costs, risks and assets — and respond — while on the go, along with adding proactive email notifications and alerts to give users realtime updates via their inbox.

During its 8-month beta period, the startup worked with companies from a smattering of market segments, locations and sizes to get a sense of how to better sync their business performance with AWS. Over that time, Newvem has analyzed more than 10 million AWS instances and reveals $11 million in potential spend efficiencies each day.

Newvem VP of Biz Dev and Marketing Cameron Peron tells us that, over the past eight months, the company has analyzed over 40 million virtual services that cover more than 1,000 clouds and, over the past five months, more than 25 percent of its users have increased their AWS usage between 100 and 1,000 percent.

“We listened to our users over our beta and understood that costs are simply a measurement of something bigger – usage,” Peron says. “Cloud users need to understand how their cloud usage impacts real profit. We analyze the full spectrum of AWS resources to reveal insights on costs, risk, and assets. These measurements help our users to align their cloud usage directly with business performance and ultimately to ‘profit from their cloud.'” 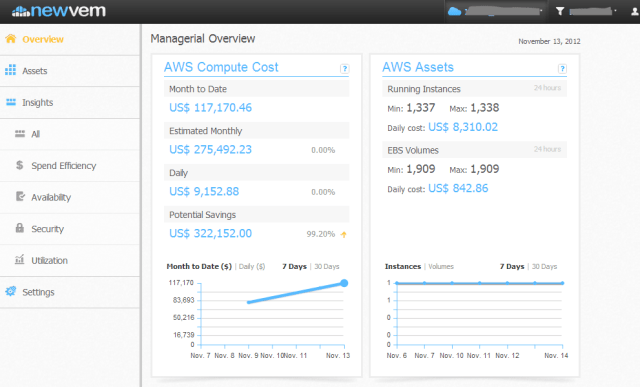 Going forward, the company plans to continue offering a free version of its new analytics service to help cloud users learn how to improve their consumption of cloud infrastructure (i.e. onboard) and get the knowledge they need to become more proficient.

We also can’t help but notice that Newvem’s announcement follows closely on the heels of Cloudability’s launch of its GA and premium offerings that help businesses track their cloud spending. While Cloudability calls itself the “Mint.com for the cloud,” Newvem has been known to refer to itself as “Google analytics for AWS.”

Both have some appeal in that superficial “X for Y” way, but for Newvem specifically, while the goal of bringing transparency and visibility to Amazon’s oft-opaque cloud services is exciting, Newvem is hardly alone, thanks to competition from a number of startups and established players, like Cloudyn, Rightscale, Cedexis and Cloudability. Of course, this also raises the question: If there’s such a big market for AWS analytics and related services, why wouldn’t Amazon just address this itself? It’s not as if it’s also a multi-national eCommerce company and tablet developer or anything…