Walmart’s experimentation with subscription-based commerce continues today, with the public launch of Goodies.co, a food subscription service featuring boxes of sample-sized treats shipped monthly. The service is the latest to emerge from @WalmartLabs, the retailer’s Silicon Valley-based innovation lab focused on quickly building, launching, and testing new business models that may or may not make their way to Walmart.com or Walmart stores at a later date.

@WalmartLabs, which operates something like a startup within Walmart, has grown over the years through the acquisitions of other startups, including Kosmix, OneRiot, Grabble, and Small Society. The group is often focused on e-commerce initiatives, like Shopycat, its gift recommendation service launched last year. Shopycat, incidentally, is one of @WalmartLabs’ successes – the Facebook-based gift suggestions it offers are now making their way to Walmart.com just ahead of this holiday season. Another lab innovation, Polaris, is also now the search engine on Walmart.com.

News that Walmart would begin testing a subscription-based commerce offering called Goodies.co was first revealed this May, with the expectation of it launching within “a month or two.” However, the service ended up launching its beta in August instead. Initially tested by Walmart employees, then later spreading further through word-of-mouth, Goodies.co now reaches 3,000 users across the U.S.

Goodies customers pay just $7 per month for a box of six to eight sample products, which would otherwise retail for $15. The price includes tax and shipping, making it one of the cheapest e-commerce food subscription services on the market today. To compare, the startup Love With Food, a graduate from the 500 Startups accelerator, charges $10 per month for a box with eight items. Pop-Up Pantry’s meal-focused box starts at $17 per month, and healthy snacks service Sprigbox begins at $26.95 per month, for a box of 10-13 items. 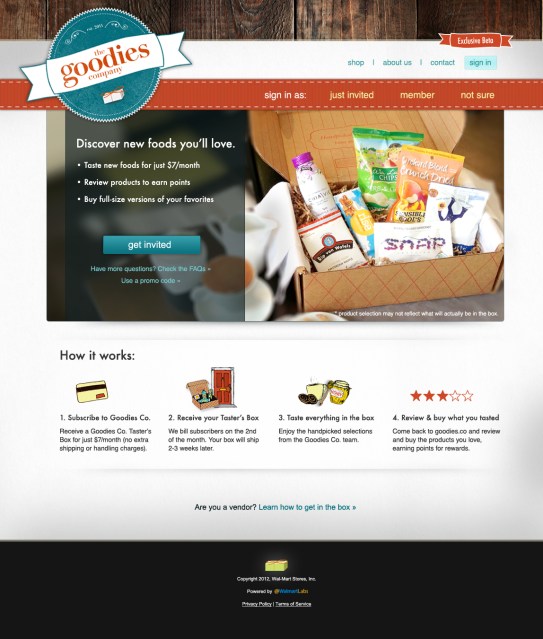 Like others in this space, Walmart’s box includes a variety of unique, gourmet products, a mix of artisanal, organic, gluten-free, or other healthy items, sourced both from Walmart’s extensive vendor community, as well as from newer companies just emerging on the market.

For now, Walmart isn’t aiming to profit from the subscription service so much as it’s interested in testing the viability of the subscription business model itself, still largely unproven. According to @WalmartLabs’ VP of Products, Ravi Raj, his team is “fairly confident” that they can drive tens of thousands of customers to the new service. “But it will start to get meaningful for Walmart once we get to a certain scale,” he added. Asked what that scale may be, Raj declined to say.

Now in its fourth month, Goodies is opening its doors to a somewhat wider audience, allowing anyone to sign up for an invitation to the service starting today. These invitations will be rolled out on a first-come, first-serve basis, says Raj. Unfortunately not everyone will receive theirs by year-end. It will largely depend on demand and how quickly Goodies can scale to meet that demand.

Walmart isn’t just using Goodies to test consumer interest in subscription-based commerce. The retailer is also interested in collecting data about the products included in the box in order to help it determine whether or not to stock the item on Walmart.com. While Walmart hasn’t made any promises to the some 30-plus vendors who have participated to date, the potential to get on Walmart’s shelf, whether a physical or virtual shelf, had vendors offering their samples to Walmart for free during the private beta.

To generate feedback from customers about the items, Walmart encourages users to leave product ratings and reviews on the accompanying Goodies.co social community site. In exchange for doing so, customers earn loyalty points that can be later redeemed for a free box in the future. This data, combined with the sales data from customers buying the full-sized items from Goodies.co, is how Walmart will determine whether or not there are any products that deserve moving up Walmart.com’s website. 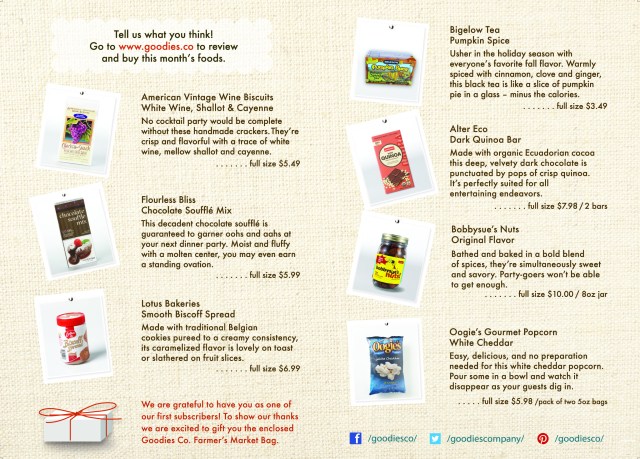 To give you an idea of what sorts of things might be in the boxes, November’s “Easy Entertaining” themed box includes wine biscuits, pumpkin soufflé mix, dark chocolate infused Quinoa bars, white cheddar popcorn and more. Given that subscription commerce services have run the gamut from beauty supplies to shoes, the other big question is why did Walmart begin its tests with food?

“We felt there was room for a lot of innovation, especially in the food space. Food is a really fun, social category and people love to talk about new foods they discovered,” explains Raj. “And it plays to Walmart’s strengths, in terms of being the largest grocer in the country. That’s why we picked food.”