Turntable.fm, my music streaming service of choice, just updated its platform this morning. Along with a cleaner, much more sleek interface comes the ability to host huge rooms of listeners. How big? There’s no limit. Turntable.fm rooms can be as small as a few people, or, thanks to the latest update, as big as Metallica playing in the U.S.S.R. in 1991.

Rooms were previously capped at 200 listeners. With the latest updates, the first 200 users will have “a spot close to the stage” and can watch their little avatar bob their head to the music. Everyone else will listen in what Turntable.fm calls an overflow room. Users will still listen to the same music and have the ability to chat with the DJs, but not with the other users in the room. Like in real life, it’s first come, first serve.

I talked to Bill Chasen, turntable’s founder and CEO this morning. This update is huge for turntable.fm and the product of a huge six month push. “We are turning turntable.fm into a digital venue,” he said, adding “We had big names come to us, and with the 200 person cap, some fans were disappointed.” With the new platform, it really allows music acts to connect with fans, he explained.

The platform can now support an infinite room size. As more people join, the view expands, showing more people, a larger stage and more lights. You can see that now by selecting a popular room and one with hardly anyone in it.

The new interface is much cleaner than before. Chasen explained to me that the DJ cue now works like it does on turntable.fm’s iPhone app. The web interface’s volume level selector is now on the top bar instead of hidden over one of the speakers. There’s also now a progress bar for the playing track.

Chasen said to look for for international support, coming in early 2013.

Turntable.fm launched in late 2011. It’s the project of Billy Chasen, co-founder of Stickybits with Seth Goldstein who is also turntable’s chairman. Goldstein recently went on to launched DJZ, another music streaming service, with the help of $1 million in funding from Kleiner Perkins and others. 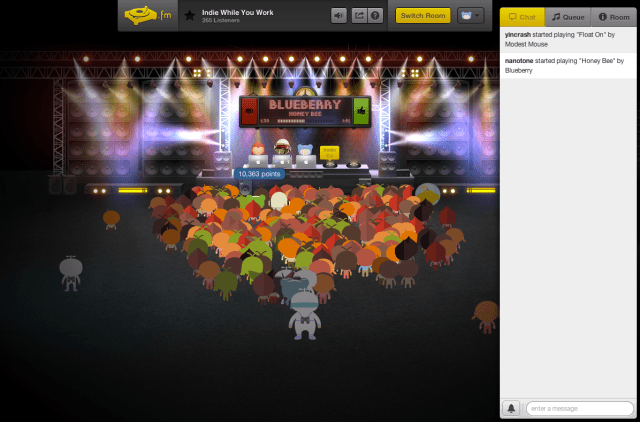 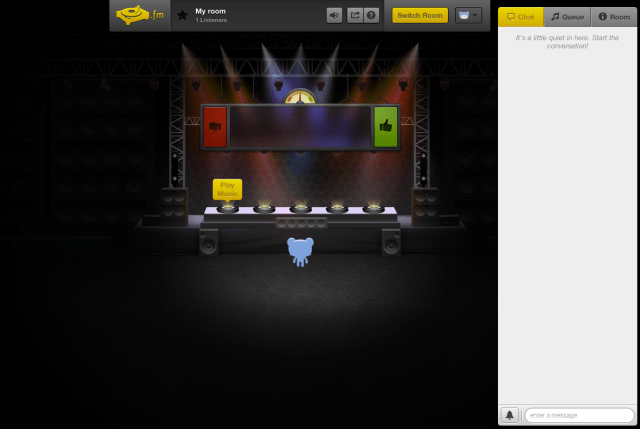