Tonight during Reid Hoffman’s interview with Steve Ballmer, the two talked about everything Microsoft. Now that Ballmer is talking about his competitors he let out a few bonzo words when it came to Google and Apple and the state of their phone ecosystems, especially when it comes to apps.

He truly believes that Microsoft can wedge itself between the two to be successful with diversity and organization. As Ballmer describes Windows 8, Surface and Phone, he says that the products have been done right and the company is working very closely with developers, unlike his counterparts at Apple and Google. Sure, Ballmer has said these types of things before, but he’s losing his mind tonight in only the way he can.

Have a listen (see the two spots I marked):

The Windows Phone is actually really nice, and there’s definitely a market for them. 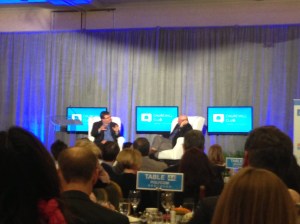 At one point he said of Windows: “Wow, it just works!” And words don’t really describe his excitement. In the next breath, he got a jab in at the “Maps debacle,” clearly pointing at Apple.

Regarding the cloud, Ballmer said, and I quote: “Woooooooow” (listen to above audio clip). I honestly don’t even know how to spell what he said. He’s happy and I’m glad that Reid Hoffman is interviewing him. This all might sound like sour grapes, but I really want to understand Microsoft’s strategy and what it stands for as a company. I just don’t get it.

When Steve Ballmer discusses enterprise and the consumerization of it, he is completely calm and sounds like he knows exactly what he’s talking about. This is what Steve Ballmer knows. But when it comes to consumer products, it just sounds like he’s trying too hard. I wish he’d just be calm, cool and collected, talk about success and failure, and leave the crazy yelling out of it. And that’s coming from someone who loves crazy yelling. Basically, it went a little something like this gem from the archives:

Also, it was a cash bar tonight. I can’t wait to watch this show again next week.

In the words of Steve Ballmer this evening: “Yeah baby!”