Remember the time when web sites were reserved for businesses, or niche designers? Before the days of Tumblr and WordPress and even MySpace (where I learned my first bit of basic code). Now anyone can easily build a website, to the degree where startups have crazy names like Yipit and Maluuba just to snatch up a domain.

But times are shifting. We’re heading into an era of app creation, rather than mainly app consumption, and Yapp’s public launch of its app event creator is just the beginning. The product has been in beta for the past 6 months, with over 73 percent of those invited activating their beta code, 55 percent of whom were able to successfully publish an app.

Those aren’t super specific numbers, but when weighed against the sheer range of companies, organizations, and individuals using the product it seems clear this is going to pick up.

I just created my own app in a very short period of time. It is still barebones, but it does give you an idea of what we’re doing for CES coverage in January. I won’t say that I don’t have a short list of feature requests, but overall it’s almost unbelievable that fifteen minutes ago there was no such thing as the TechCrunch CES app, and now there is. All thanks to a little handy work on the interweybs.

The interface for building out an app couldn’t be more clear. You start with four main pages: schedule, invitation, newsfeed, and gallery. You can add another page if you’d like. From there, you edit individual schedule entries, descriptions, and newsfeeds using the same buttons you’d press if you were using, not building, the app.

It’s about as intuitive as it gets. 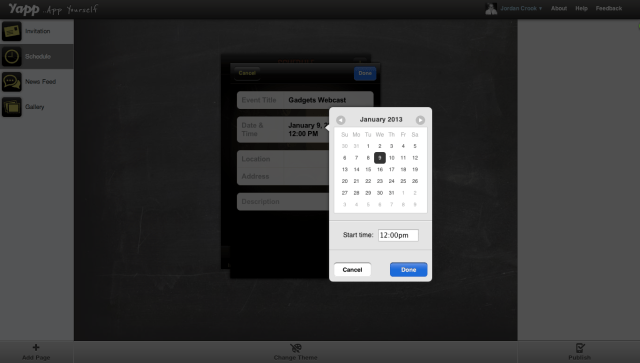 One thing I found missing was the stop date. The Yapp beta has been used for conferences, weddings, romance novel bookclubs, maker faires, youth ministry gatherings. In fact, Yapp totally “has the religions covered,” as founder Maria Seidman explained.

Yet, there’s no way to send an invitation for multiple days. In other words, you only have the option to give a start date, not an end date. I’d also like to be able to rearrange the gallery images to put the best ones up top, but the app only arranges pics in the order they were uploaded.

Either way, these are minor complaints compared to the end product, and the little effort required to get there. You finish up by sharing the app either with a link or by email, and it’s as easy as clicking that link on a mobile device to land at the Yapp Box app listing in the App Store.

Yapp Box holds all the Yapps you’ve been invited to and created, creating a central mobile location for Yapping of all kinds.

We’re still a ways off from having apps the way we have personal websites and blogs, but Yapp is joining other niche app creators like Appy Couple to pave the way for this in the future.