We have no idea what this is about either, but Google is apparently running some kind of viral marketing campaign right now that involves something called the Niantic Project. The videos and puzzles on the campaign’s website looks like they come right out of a J.J. Abrams project, but it’s not clear what this whole affair is actually about.

Niantic Labs, of course, is the group inside of Google that recently launched the Field Trip app for Android, though the fact that this group even existed came as a surprise to everybody when the app first appeared.

Here is the trailer for the project:

The Niantic Project story line, which is apparently set to run for the remainder of this month, currently centers around a mysterious phone and augmented reality. That, of course, is pretty much in line with what Field Trip does, but it seems unlikely that this whole campaign would be about an app that’s already been released. Maybe it’s an alternate reality game, as our friends at WebProNews speculate, or maybe it’s a full-blown marketing campaign for Field Trip, or maybe it’s just a countdown to the launch of a $200 Google Glass edition for all.

There is obviously some connection to Niantic Labs here – why else would Google use this name otherwise? Niantic Labs is run by John Hanke, who was the CEO of mapping startup Keyhole before Google acquired his company in 2004 and used it as the foundation for Google Earth. His interests right now seem to be focused on ubiquitous computing.

This is a pretty unusual marketing move for Google, no matter what it is ultimately about. If you can figure out what this is supposed to be, feel free to let us know in the comments (or head over to Reddit to see some additional discussion of what it could be about). Otherwise, I guess we’ll find out on November 30. We just hope that this will have a more satisfying ending than your average M. Night Shyamalan mystery. 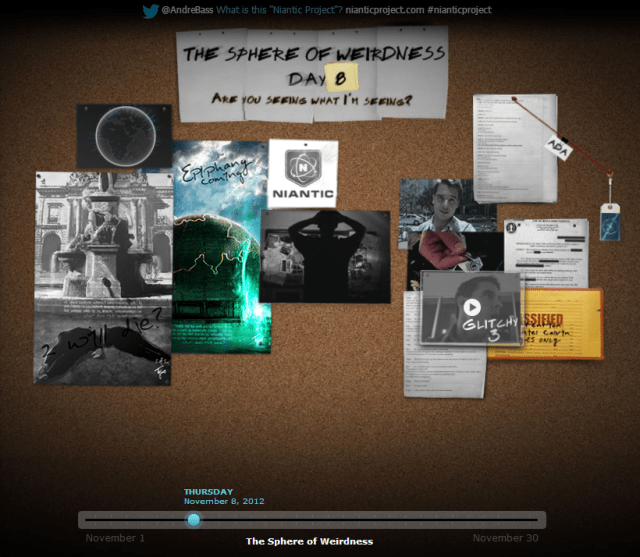