For more than a few years now, engineering talent has been in high demand but it also seems that, of late, coding has become cool. Okay, maybe not cool, but thanks to a fleet of startups and companies like Codecademy, Treehouse, Code School, CodeNow, Khan and more, it’s becoming easier and easier to learn the basics of the world’s ubiquitous programming languages.

By bringing computer science education online and making it affordable, these companies have begun to democratize technical knowledge, exposing a new, global audience to programming along the way. Piggy-backing on this progress, a young Palo Alto-based startup called LearnStreet is launching today to make coding accessible and relevant to the masses, specifically those that may not be looking to become professional developers but want to learn how to build using the latest web technologies.

Conceived by Sun Microsystems co-founder and venture capitalist Vinod Khosla and WhoWhere? and eGain co-founder Gunjan Sinha and inspired by the Maker Movement, LearnStreet operates on the premise that, while current online coding resources have done wonders for popularizing computer science education, they are still, by and large, limited.

The problem says LearnStreet Product VP Sanjay Desai is that most coding platforms simply take the traditional “skill-and-drill” offline model and bring it online, failing to connect theories and ideas with real-world contexts, i.e. actual code. Desai said that, for this very reason, drop-out rates have tended to be very high and while the interest is there, few people actually acquire all the skills they need to build something.

After recruiting a founding team and months of beta testing, Khosla invested $1 million in LearnStreet through his firm Khosla Ventures and has also joined the startup’s board. Khosla now only sits on two boards of for-profit companies: Square and LearnStreet, which means that he will continue to play an active role in advising the startup during its early development.

Of his investment and impressions of LearnStreet, the investor says, “as an entrepreneur and VC, I have seen the massive impact that programming can have on creating new businesses and opportunities. But most people have still never touched a line of code. LearnStreet has the potential to democratize coding, making it practical and relevant to people from all walks of life.”

But just how is it that LearnStreet hopes to accomplish said democratization? Although it may sound cheesy, Desai says that it starts with approaching coding as a new form of self-expression and approaching education not as an end in and of itself, but as a means to create products that have real-world application.

LearnStreet also hopes to capitalize on the movement within education to leverage technology to personalize the learning process by providing users with a multi-modal learning environment. Said another way, the startup’s platform includes in-browser coding (project-based lessons), along with instructional videos (a la Lynda.com and Treehouse, for example) and background, theory and exercises. 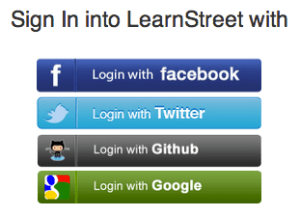 Basically, LearnStreet’s platform is broken down into two sections: Online courses that introduce beginning coders to basic programming concepts, syntax and so on, and its so-called “Code Garage,” a project-based learning tool that allows users to apply their newly-acquired knowledge to existing code and build widgets, games, puzzles and so on.

LearnStreet users can build in Code Garage by themselves or collaborate with friends, signing in to the platform via Facebook, Twitter, Github and more, which means that they can share their completed projects with friends, family and potential employers.

In attempting to take a practical view on learning how to code, the startup also offers a Dev Tools section that instructs users on how to connect the dots between what they’ve learned and actually pushing their code out into the wild and woolly Intertubes.

Of course, the fact of the matter is that coding ain’t easy — or else your mom would be busy creating another Sudoku solver. (With all due respect to moms, of course.) Because there tricky concepts, head-scratching and road blocks are implicit to learning how to program, LearnStreet provides in-browser live chat, along with the ability to tweet course instructors and access a community-driven Q&A section in realtime to prevent users from having to give up out of frustration. 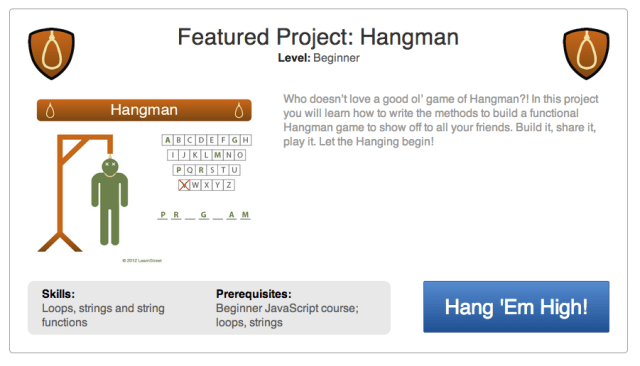 Considering that 75 percent of all development emanates from forking (building off of) existing code, providing users with a project-based learning environment that connects concepts with real-world application is huge. Of course, LearnStreet isn’t the only startup focusing on and iterating around this approach, so the key will be how well these companies build an ecosystem of services around an interactive community of both learners and experts.

At launch, LearnStreet is focused specifically on content for beginners, but, going forward, Desai says the team will be beefing up its intermediate and advanced content, as well as investing in services, like those that connect its students to employers. It’s all about moving from code literacy to showing people what they can do with code in the real world and potentially the dawn of Computer Science Education 2.0.

More on LearnStreet at home here.