People have been screaming bloody murder, claiming Facebook purposefully reduced how many users see Page posts in the news feed to get Pages to pay to reach their fans. But that’s just not true, and I have the data to prove it, plus Facebook on the record saying the rumor is false. Facebook did make spammy Pages less visible in the feed, but that was to make the news feed better, not to earn more money.

I’m going to dive into exactly what’s going on here, but for those who want the quick takeaway to help them bust myths, here’s the short version:

Facebook Pages have always only reached a small percentage of their fans with each post. The launch of Promoted Posts had no impact on the news feed reach of the average Page. What actually happened was that Facebook made it easier to report Pages for being spammy. It also changed how it picks what shows up in the news feed so that Pages that get frequently reported for spam show up less often. Most Pages weren’t affected by these changes, but spammy Pages got penalized and they’re the ones complaining. The moral of the story is don’t spam your fans, and everything will be fine. 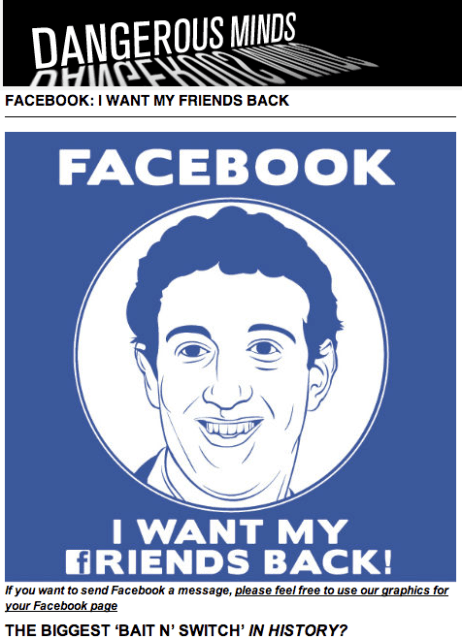 Alright, so what’s the big deal? A website named Dangerous Minds made a stink because news feed posts published by its Facebook Page supposedly weren’t driving as much traffic as they used to. Around the same time, Facebook rolled out its Promoted Posts product that makes it easy for Pages to pay to reach a higher percentage of their fans with each post. That led Dangerous Minds to jump to the incorrect conclusion that Facebook was trying to extort Page owners — decreasing unpaid reach to force them to pay to get in front of fans they used to reach for free.

Sadly, news outlets like Ars Technica that are typically level-headed covered the Dangerous Minds rant as true despite its lack of hard data to back up its anecdotal claim. Lots of people now mistakenly think Facebook decreased Page reach to increase ad sales.

So why is this untrue? Let’s start by debunking some major flaws in the logic of Dangerous Minds. First, it implies that Facebook Pages previously reached 100 percent of their fans with every post. That’s never been true. Facebook’s news feed ranking algorithm (widely known as EdgeRank) chooses between hundreds or thousands of pieces of content each day to show the few dozen most relevant stories in each person’s news feed.

Facebook told me in February that the average Page reaches 16 percent of its fans with each post. That’s because some fans aren’t online when the post is published, a specific post hasn’t gotten much engagement from the people Facebook already showed it to, and because if you don’t interact with that Page when you do see its posts, Facebook will only show you them every once in awhile.

You don’t reach all your followers on Twitter with each tweet either. You could, except most people follow so many people that they only read parts of their stream. If Facebook did show all Pages posts in everyone’s news feed, it would be horrible. The feed would be full of lame marketing messages that would drown out your friends.

So why did Dangerous Minds’ Page and some other Pages start getting fewer news feed views and clicks to their posts? There are two reasons.

One is that these Pages appeal to newer Facebook users who don’t Like that many Pages or have many friends. So originally they might have been seeing more of these Pages that later saw their reach drop. But over time these fans added more friends and Liked more Pages. That meant there was more competition for space in their news feeds, and all their friends and Liked Pages started showing up less frequently. Just to be clear, all the Pages that saw a drop weren’t necessarily doing anything wrong.

The alternative, but more common reason is that people thought those Pages’ posts were spammy. That’s because they were posting too frequently, people found their content irrelevant or misleading, or their messages seemed like intrusive marketing. Facebook doesn’t want to show its users spam so it limits the reach of spammy pages.

Each news feed post has a drop-down arrow next to it that lets users hide it from their news feed or mark it as spam. Facebook made these controls more visible and easy to use in September. That let people who thought a Page was spammy report it to Facebook or remove it from their feed.

“We made a relatively large ranking change in September that was designed to reduce spam complaints from users. We used [spam] reports at an aggregate level to find Pages or apps generating a lot of reports [and decrease their reach]. We’ve also added personalized attempts to reduce presence of posts you’re likely to complain about.”

Basically if you never click, Like, comment, or share posts by a Page, Facebook made that Page less likely to show up in your feed. Cathcart says “That’s a relatively large change. It resulted in a large decrease in spam reports,” meaning it succesfully made the Facebook news feed better. You can see in this data from Facebook Page analytics company PageLever how more people began reporting Pages for spam in September thanks to the change. 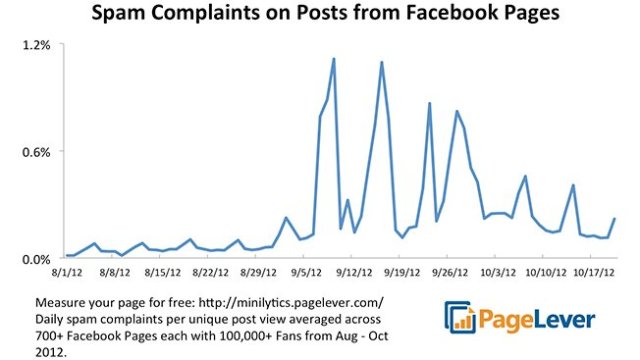 The decrease in reach for spammy Pages had nothing to do with Promoted Posts, which launched in May, but coincidentally started rolling out to more Pages in September. Promoted Posts is actually just an easier way to buy Sponsored Stories right from the news feed, rather than the more complicated separate ad-buying tool. Sponsored Stories have been around for years and Facebook began allowing Pages to buy more reach in the news feed with them in March.

If Facebook was manipulating reach to drive sales, it would have happened long ago, not in September. But it wasn’t. In fact, Philip Zigoris, an engineer on the Facebook ads team tells me that, “The feedback [from Page owners to Promoted Posts] has been remarkably positive.” If Pages don’t want to pay for extra reach, that’s fine. Things will be exactly the same as before. Publish great content and your posts will reach more people, get re-shared, and go viral. Facebook isn’t forcing people to pay, it’s an added option.

As of March 2012 there were 42 million Pages on Facebook. Only 300,000 have ever tried Promoted Posts. Even combined with those that buy Sponsored Stories, the percentage of Pages paying for news feed reach is very small. The total percentage of all Facebook posts from friends and Pages that are paid for is tiny, so some Pages paying for reach is unlikely to be significantly reducing feed reach for those who aren’t paying.

Just to put an official nail in the coffin of this rumor, I asked news feed manager Cathcart straight-up: “Did Facebook decrease organic Page reach to boost sales of Promoted Posts?” His flat-out answer was “NO.” Cathcart says that for Pages, “the median reach is still above 16 percent as of a month ago” just like it was in February.

The Data To Back It Up

I didn’t want to just take Facebook’s word for it, though. So I asked the popular Facebook Page analytics provider PageLever to run the numbers of over 700 Pages. PageLever helps businesses track the performance of their Facebook posts in real-time and advises them the best strategies to get more reach and clicks. 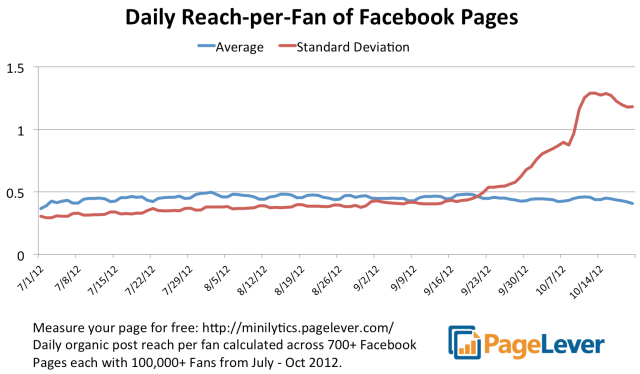 The data confirmed Facebook’s statement. The amount of fans Pages were reaching has stayed relatively stable since July.However, the standard deviation of reach did shoot up. That’s because the few especially spammy Pages and those affected by an increase in news feed competition had their reach drop significantly, while the reach of Pages that almost never get spam reports got a boost. That’s the impact of Facebook’s changes to the spam reporting UI and the EdgeRank algorithm.

Note that PageLever’s data is only a sample. Facebook constantly pushes updates to EdgeRank and there are seasonal changes that can influence Page reach. This article isn’t meant to say Page reach absolutely isn’t decreasing, but that Facebook didn’t purposefully reduce reach to sell more ads. Other factors influence the total traffic Facebook sends to links posted by Pages. For example, traffic could decrease because Facebook started showing re-shares of Page posts by fans to fewer of their fans.

The beauty of the web is that its scale can crush rumors started by flukes and anecdotes. Dangerous Minds misunderstood how Facebook works, and could only go on its data and the claims of a few random Pages that commented on its story. That led it to make a wrong, but sensational assumption that spread like wildfire.

But Facebook sees what’s happening to all Pages, and independent auditors like PageLever can look at huge data sets to determine what’s actually going on. When people make big claims like this, don’t just assume they’re right. Demand to see scientific evidence. 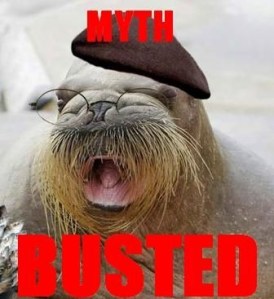 What should Pages do now that they know what happened? Focus on publishing high-quality content. Don’t post too often and don’t cram your marketing down people’s throats. Be entertaining and informative. Then follow your analytics closely, consider hiring experts that can help, and refine your strategy. If your Page’s reach decreased, I’m sorry. It doesn’t mean you’re a bad Page, business, or admin. You just need to work on finding relevant content to post and delivering it with a natural non-spammy tone.

And Facebook users? You have control over what you see in the news feed. If you see a great post and want to see more like it, just click, Like, comment, or share. See something stupid or annoying? Hit the drop-down arrow next to it and hide the update or report it as spam. That teaches Facebook, and will make your news feed live up to its potential as a source for what you truly care about.

Thanks for reading, here’s some of my other most popular posts:

Facebook Removed Your Real Email Address From Your Profile, Here’s How To Get It Back