Today, Facebook is encouraging its legions of users to declare civic enthusiasm to their friends, with a prominent “I’m A Voter” botton at the top of the newsfeed. Large-scale, experimental research shows that simply clicking the button, and sharing your voting intention, could do more to increase voter turnout than any other partisan rant or news story you may share today. With a Single Message delivered electronically on Election Day,” researcher James Fowler explained to TechCrunch, “Facebook caused an extra third of a million people to vote. To put that number in context, remember that the 2000 U.S. Presidential Election was won by a margin of just 537 votes in Florida.”

Published in the prestigious journal, Nature, the 61-million person study displayed an “I voted” button atop the newsfeed of everyone over the age of 18, monitored whether voting intention was shared with others, and verified if the action had an impact on the user and their friends from official voting logs. Users were randomly assigned to see two versions of the “I voted” message, with one displaying pictures of their friends. Those who didn’t see pictures were barely influenced, “which raises doubts about the effectiveness of information-only appeals to vote in this context,” question the authors.

In the end, the message (with pictures) boosted turnout by a respectable 2.2 percent. Most importantly, 80 percent of the effect was indirect, caused by friends sharing the message. So, indeed, you can make a difference, and all it takes is a simple mouse click to spark a chain reaction of civic goodness.

After users click the “I’m Voting” button, they get access to a realtime heat map of voting around the country (pictured below): 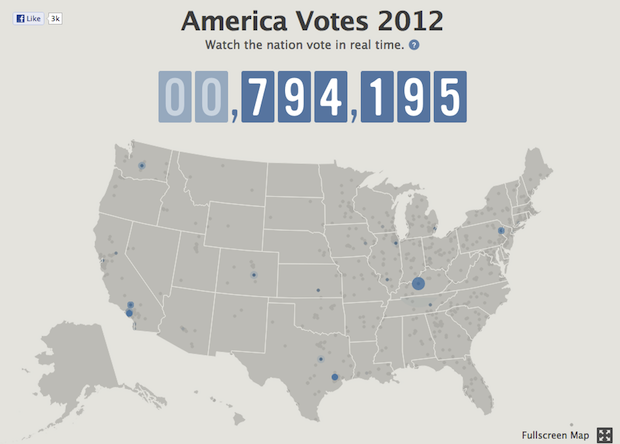