As startups go, social TV startup Miso has pivoted more than most: The company started out as just another TV check-in app, then launched a product to let users create and browse guides to all their TV episodes. Now it’s pivoting again, with the launch of a new product — a mobile app called Quips that enables TV viewers to share individual moments from their favorite TV shows with friends.

When you log into the Quips app, it asks you which shows you might want to follow… And then allows you to see images and captions from that show’s episodes. The idea is that Quips acts as a way for users to socialize around interesting moments in a show by sharing compelling images with each other. Users choose a show, choose an episode, choose an image, caption it and post it, or send it out on Twitter or Facebook. 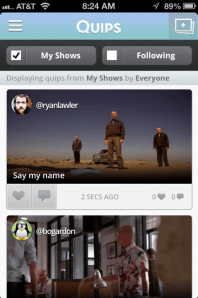 The app came about in part thanks to Miso’s failed experiment with its SideShows product. It launched SideShows last year as a way to enable users to build their own interactive guides to episodes of TV shows that they love. Once created, users of Miso apps would be able to watch a synchronized version of their favorite shows, along with trivia, comments, extra multimedia, etc. that people added to enhance the viewing experience.

Miso’s SideShows didn’t take off, in part because they were too difficult to create, according to Miso biz dev head Prakash Venkataraman. They were pitched as an open platform that anyone could build on, but the startup was really hoping for the networks to get on board and build SideShows on its platform. The only problem? Miso generally didn’t have a large enough audience to attract their attention.

But the startup did find one interesting tidbit: Those who created SideShows were really into highlighting moments from a particular TV episode through individual episodes that they captured. And that, in itself, seemed like an interesting consumer behavior to pursue. 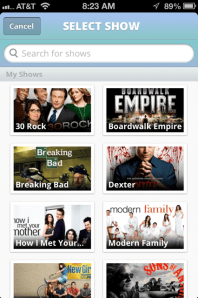 And so Quips was born.

The app strips away a lot of the complexity that exists in today’s current second screen, or social TV apps. That’s a welcome change, since most apps in the category suffer from feature creep, or kitchen sink syndrome. It’s got just a few elements: Image, caption, share. And in that sense, it’s like Twitter for TV… but better. Because people react to images in a way that they don’t react to text — which means that you have a whole different experience when sharing an image than just when quoting some line from the show.

Venkataraman tells me that Quips has more than 150,000 images from more than 500 shows. But he won’t tell me how Miso got those images — or what the terms of their usage are.* Evidently that’s because Miso is involved with some patent application stuff, or so I’ve been led to believe, and it may or may not be trying to license the images or partnering to get content owners on board. Regardless, there’s some so-called secret sauce that Miso doesn’t want to talk about.

Miso has raised a total of $6 million since being founded in 2010, including a $4 million round last December that was led by Khosla Ventures. Other investors include Google Ventures and Hearst Interactive Media. The company has about 10 full-time employees, with its headquarters in San Francisco.

==
* Startups! Don’t ever refuse to disclose how or why you’re doing something like this. It makes you look shady and disingenuous, and makes me think that whatever you’re doing is going to get shut down.