You may know GetJar as the largest independent, cross-platform app store, and one of the largest distributors of Android apps outside of the Android Market. With more than 2 billion downloads and some 150K+ applications, the company continues to grow. This is thanks in part to its “open” model, which allows third-party app makers to distribute apps for most of the major mobile platforms. Getting there has been no small feat, considering the app store competition includes such boldfaced names as Google, Apple, Nokia, Samsung, BlackBerry and Microsoft.

Not being tied to any phone or carrier allows GetJar to support over 2,300 handsets, giving it scalability and allows developers to quickly deliver their apps to market. Yet, while you may know it as an app store (after all, that’s how the company describes itself), GetJar has begun to transition away from this — with its distribution channel playing a diminishing role.

In part, this is due to the fact that GetJar is one of the largest distributors of Android apps, not to mention the fact that it also provides paid apps for free. While Google claims it (and Android) are both open, we’ve heard that GetJar has seen some push-back from Mountain View, as the company isn’t exactly head-over-heels with the idea of supporting alternative distribution and monetization channels for Android apps that are tied into Google Play, considering that, at scale, they represent a traffic (and revenue) drain for Google Play.

The other part is due to the growing traction of its virtual currency and rewards services, which allow developers to monetize their apps and reach customers in countries that might not support paid apps through, say, Google Checkout.

Let me explain: In September 2011, the company launched a new program called GetJar Gold, which was built on the concept that advertisers’ money can enable people to consume premium content for free. In other words, it’s just like TV or radio, where consumers have access to premium content and studios collect money from advertisers to buy the rights to that content. With GetJar Gold, users could download over 100 top premium apps for free, which generated more traffic, in turn allowing the company to show more sponsored apps and pay developers for premium content based on the revenue generated from advertising dollars. 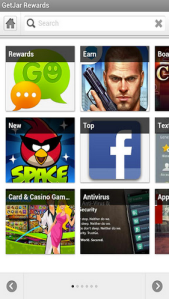 In February of this year, GetJar released a totally revamped Gold program, which included more sophisticated economics and compatibility with Google Play, as the previous iteration of Gold was limited to GetJar’s app store. The main attraction of the new program was GetJar Rewards, which uses the company’s discovery system (ranking apps by engagement and personalizing suggestions for each user) to reward users for every download by giving them virtual currency (i.e. Gold). The Rewards app, launched as an app on Google Play, indexes apps from Google Play, allowing the company to expand its discovery and monetization options for developers into the Android ecosystem. Helps the cause (and payout to accredited devs) that it’s add-supported.

The app basically creates a wallet that accumulates GetJar Gold automatically every time a user downloads an app without requiring the user to register, eliminating one of the big pain points faced by most similar services. Consumers just download GetJar Rewards and collect virtual currency as they go. The one big problem with this, though? You only collect GetJar Gold for apps you haven’t downloaded before. Easy to understand the thinking behind this, but surprising nonetheless.

In addition to this, the company created an SDK that allowed developers to integrate GetJar Gold into their apps, enabling their users to pay with Gold for in-app content — like upgrades, new levels, virtual, goods and so on. As GetJar Founder and Executive Chairman Ilja Laurs explains, the SDK works like a billing platform. Developers include a few lines of code in their app and include a “Pay with GetJar Gold” button next to their “Checkout” buttons — anywhere they want to sell in-app content.

The founder tells us that developers who have integrated its currency into their apps have doubled their revenue and, in territories where Google Checkout isn’t supported, they’ve seen revenue grow as much as 10x.

But the real kicker? Since launching its new GetJar Gold program in February, the company has seen its user base double every month. On September 24th, the company announced that it had crossed the 20 million user milestone. Today, less than six weeks later, GetJar Gold reaches 50 million users. Not only that, but Laurs says that revenue is growing at the same pace, doubling in September for example, and now accounts for 60 percent of the company’s total revenue.

From Distribution To Discovery & Commerce 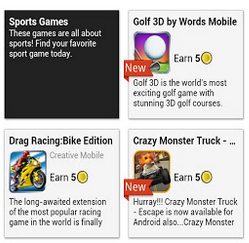 Given the surprising success it’s having with Rewards and Gold, it’s no wonder GetJar is looking to make monetization and discovery tools its primary focus going forward. The founder says that the company is also working on improving its app-discovery mechanisms by building on top of Infrinity’s technology — a company GetJar acquired last year — with the idea being to beef up its engagement and personalization filtering algorithms, combining it with rewards data, to serve consumers with apps they’ll actually enjoy, while incentivizing them to do so with virtual moola.

Whether you believe the hype or not, we’re seeing the emergence of GetJar 2.0, as the company evolves away from the old app store/distribution model to one focused on discovery, virtual currency and commerce and app monetization. GetJar’s transformation is reflective of a macro shift as well, one that Google and Apple are wrestling with as well. Part of the reason Apple bought Chomp earlier this year. Yet, while Apple and Google can call on ever-growing and enormous user bases, their app stores are (or are becoming) bloated and their ranking systems make it tough for many developers to have their apps discovered and seen by a significant audience.

As evidence, GetJar CEO Chris Drury cites estimates (like those by XyoLogic) that about 0.1 percent of apps on iOS get 50 percent of the downloads, while between 30 to 50 percent of apps on Google Play never get any traction at all. Is that because the other 99.9 percent of iOS apps or those 50 percent of Android apps are awful, horrible, very bad apps? Some are crappy, some are blatant clones, sure, but, no, it’s because (in part) that top charts have a powerful influence on the way people download apps on their iPhones and iPads.

You might also say that the way app stores manage their categories is broken, as is app search (Chomp or no Chomp). Generic categories, titles and logos don’t really help anyone discover awesome new apps or games. People don’t search for “business apps” they search for “task masters” or “task list apps,” and logos don’t actually help us get a sense of what an app is all about. We want to know how many people are using the app, whether our friends are using it, with features, functionality and context (stress on this word) front and center. And, for GetJar, add how much virtual currency one would receive by downloading it to that list. 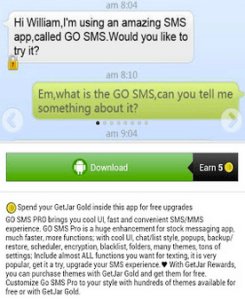 Just creating a list or even graphing apps in a web based on how similar they are to each other doesn’t really help. It’s all well and good to show me SoundHound next to Shazam as an app because they’re related. But app search engines need to recognize that I’ve already downloaded Shazam and not just that I might like SoundHound because they’re similar (duh), but that 500 of my friends or colleagues or people who are exactly like me happen to be using and loving the app. That makes a difference and makes me want to download it.

At risk of droning on, there is similar thinking behind GetJar’s focus on currency and app discovery, because it not only helps the end user find apps that will actually help them solve their problems or more enjoyably procrastinate, but that will get developers’ apps in front of more eyeballs and provide incentive to consumers to actually download them. Throwing out top charts altogether may be slightly controversial, but GetJar is far from being alone in thinking discovery and search are broken.

And now with GetJar Gold having reached 50 million users, they have a strong vessel to lead them in that direction and at least the beginning of revenue (and traction) that should temporarily put an end to those “hey, what happened to GetJar?” and “have they sold yet?” questions. Good thing this transition is underway, too, because it explains why GetJar’s homepage looks like it hasn’t seen a redesign in five years.