Facebook added a search box to its App Center today, but what it might do next is more interesting. Facebook could soon let developers pay to buy search keyword ads in the App Center search typeahead, similar to the specific name ads in its site-wide search typeahead. And if App Center goes beyond the typeahead and launches a search results page, it could host full-blown AdWords-style search ads.

First the actual news. Previously, there was no way to search in Facebook’s App Center. The best approximation was searching in the site-wide search engine which would pull up app profile pages in App Center as results. Today Facebook added an internal search typeahead to App Center that lets you search for apps by name or by keyword like “fitness”, or “cars”. There’s no results page, though, just a drop-down of options.

That sets the stage for ads within App Center. This prediction falls right in line with Facebook’s strategy to become the leading source of app discovery outside of the official Apple App Store and Google Play marketplace — where no ads appear. It believes that with social recommendations and quality ratings based on how often people actually use an app, it can help us find apps better than simple ranked lists based on downloads.

Along with organic discovery, though, Facebook is getting serious about paid discovery. That’s a huge industry where developers pay massive sums to appear in ad networks and drive installs.

Facebook dove head-first into paid discovery the last few months. On October 17 it officially launched its mobile app install ads in the news feed that link to the app stores. In September it also launched Sponsored Results ads in the site-wide search typeahead. These let developers choose a competing or similar app, and when it’s searched for, their app or Page shows up above it in the search typeahead. There’s no keyword ads, though.  Devs have to pick a certain Page or app they want to be advertised next to. 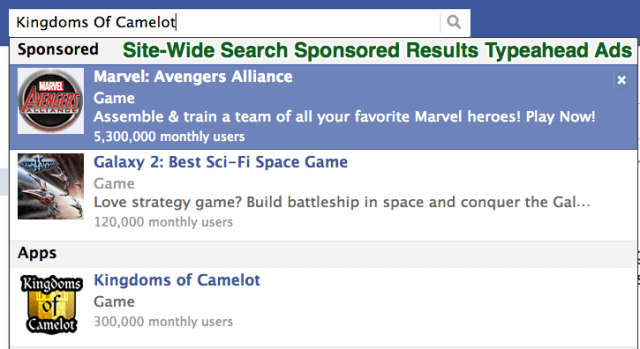 Those work fine but there’s a missing piece. If someone’s browsing the news feed they might not be in the mood to download apps. And if they’re searching for a specific app, ads for competitors might just be a distraction. But when people are on Facebook’s App Center they’re clearly trying to discover apps, and when they make a keyword search for something like “puzzle game,” “tower defense,” or “photo editor,” they’re open to suggestion about which app to download.

That was a lot of build up, but essentially what I’m saying is that Facebook’s App Center is ripe for search keyword ads that either show up in the App Center search typeahead or as full entries on an as-yet-unlaunched search results page. Devs could pick a keyword, bid a price they’re willing to pay, and Facebook could show the ad from the highest bidder in the typeahead or results page, just like Google AdWords.

That bidding competition could make this a huge revenue driver. Think how many tower defense games or photo editor apps might all vie for those keywords, bumping up successful bid prices and earn Facebook lots of money. 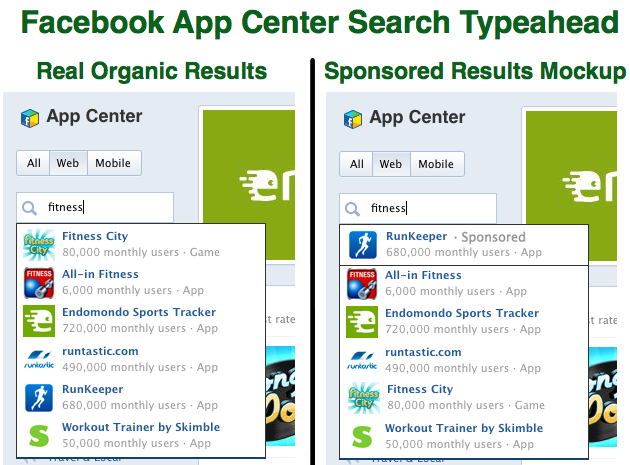 There’s plenty of App Center traffic to monetize. It launched in early June and by mid-August had 150 million monthly visitors. As of the beginning of October it had 220 million, showing rapid growth. No need to ignore the other 780 million Facebook users either. Facebook could easily bring keyword ads to its site-wide typeahead results, even if someone searching for “photo editing” outside of the App Center might be looking for a local business.

App search on the other hand is something special that Facebook already has humming. It’s got qualified leads, ample traffic, a model proven by Google, and a huge base of developers/advertisers to tap. Those could make App Center keyword search ads a staple of paid discovery budgets, a portal to the growing app economy, and a new way for Facebook to rake in the cash.