Amazon announced this morning the launch of a new photo-management application for Android phones, which takes advantage of its consumer-facing service known as Cloud Drive, a competitor to Google Drive and Dropbox. The new app, Cloud Drive Photos for Android, allows users to upload photos, store them in Amazon’s online storage, and view and share the photos from both their Android smartphones and tablets.

Cloud Drive includes a free level of service, offering 5 GB of storage before having to pay for additional space. Afterwards, users can buy storage starting at $10/year for an additional 20 GB. For comparison’s sake, Dropbox offers 2 GB for free, while $9.99/month buys you 100 GB and $199/year gives you 200 GB. Google, meanwhile, also offers 5 GB of free storage for Drive users, and 1 GB free in its photo management service Picasa. Google’s storage plans, which start at $2.49/month and up, provide storage upgrades where space is shared between Drive (generally used for documents and files) and Picasa. 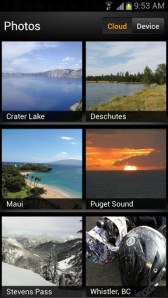 Because of the way Android is architectured, the Cloud Drive application can deeply integrate with the Android operating system itself. In the Android Gallery, it becomes another option for photo uploads. Meanwhile, within the Amazon Cloud Drive app, users can press and hold on a photo in their local Android album, and select “Upload to Cloud Drive” to save existing photos from their device to Amazon’s cloud. In addition, users can choose to upload entire albums in a similar way. No auto-upload functionality is present.

Using the app is fairly straightforward. When you first sign in, you’re prompted to use your Amazon.com credentials – there is no other option to sign up directly from the app, or authenticate using a third-party service like Facebook, for example.

At the top of the screen, there are two buttons: one which shows you the photos you have in the cloud, the other which shows you photos stored locally on your device. In the “Device” section, you can access the one-press photo upload option. As photos are uploaded, you can track their progress in Android’s notification center.

Once uploaded, photos can be viewed full-size, zoomed in on, and flipped through like  they are in a native photos gallery app. Photos can also be shared via email, SMS, Facebook, Twitter, or shared with other apps you may have installed, including Google+ or even Dropbox, if you choose. There are no bells and whistles here – you can’t edit, crop, or add filters to your photos, for example. Cloud Drive Photos is a functional, utilitarian photo storage and sharing app, but one which makes Amazon’s Cloud Drive service a more viable alternative to something like Dropbox.

Cloud Drive is already integrated with Kindle Fire HD, so it makes sense that Amazon would choose to broaden its reach with a storage solution for other Android users as well.

The app is available now as a free download on Google Play and in Amazon’s own Appstore for Android.