It seems like there are an infinite number of marketing tools competing for local businesses’ attention nowadays. An AngelPad-incubated startup called LocBox helps those businesses manage their efforts in a way that’s focused on acquiring customers and driving revenue — and it just raised $5.1 million in Series A funding.

The round was led by InterWest Partners, with participation from Google Ventures, Accel Partners, and 500 Startups. Individual investors included Anand Rajaraman and Venky Harinarayan of Kosmix (now WalmartLabs) and Deep Nishar, senior vice president of products and user experience at LinkedIn. (LocBox CEO Saumil Mehta was formerly director of product at Kosmix, and his co-founder/CTO Sailesh Ramakrishnan was director of engineering.) InterWest’s Keval Desai is joining the company’s board of directors.

Mehta said the idea for the company came after looking at daily deal sites, which (as has been much-discussed in the criticism of Groupon) can drive lots of people to a store, but at a high cost due to the deep discounts, and without necessarily turning them into lasting customers. At the same time, Mehta said there’s a large number of other online marketing tools that don’t offer obvious revenue benefits to businesses.

“The existing solutions don’t work,” Mehta said. “If you say, ‘I’m here to do your social media marketing,’ you get thrown out right away.”

Actually, LocBox does social media marketing, too, but Mehta said that’s just one piece of a larger solution. At the core of the LocBox suite is the ability to run targeted campaigns on email, Facebook, Twitter, SMS, and Yelp. There’s a lot of variety of possible campaigns, including exclusive offers, birthday rewards, and contests. (You can see a sample campaign below.) Many of them are designed to drive immediate sales, but others can help businesses acquire Facebook fans or positive Yelp reviews. None of these specific campaigns is all that novel, but the idea is to provide a single dashboard where businesses can find and manage the campaigns that make the most sense for them (and without having to blindly offer massive discounts). 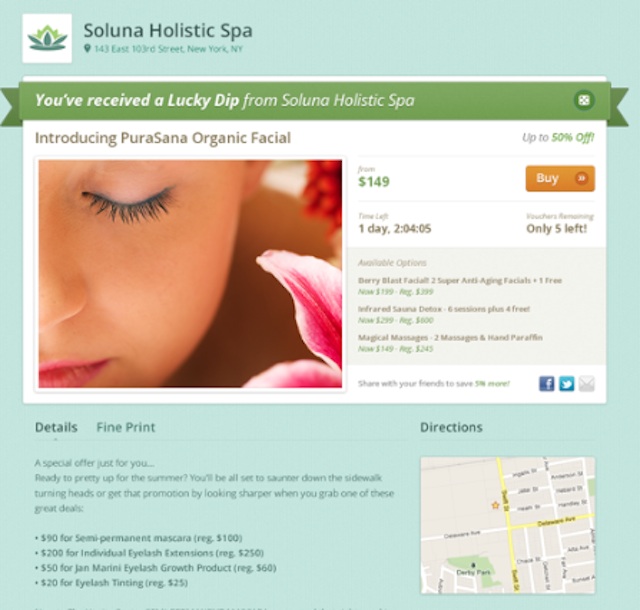 Around those campaigns, LocBox has created tools that help businesses understand what kinds of efforts are going to pay off, and then analyze whether it’s working. When someone first signs up for LocBox, the site gives them a diagnostic rundown of their current online and social media presence, with suggestions on how they could do better. When they run specific campaigns, LocBox uses data from past campaigns to advise them on the type of campaign and pricing.

Mehta said he wants to expand the company’s feature set in this area, so that it can automatically provide customers with full-blown marketing plans. LocBox is also expanding into other types of campaigns, like Facebook advertising.

The company said it has run more than 2,000 campaigns since launching last year. And as evidence that those campaigns can pay off, it points to Austin’s Elements Laser Spa, which said it made $30,000 in revenue in two campaigns.