Apple released the 10-K it filed with the SEC today, reflecting its financial status and records for the entirety of 2012. Most of the content is what we’ve seen already from quarterly results, but a couple of statistics stood out as particularly interesting and worthy of note. For one, Apple spent $3.4 billion in research and development during its 2012 fiscal year, up $1 billion from 2011. Apple also significantly added to its full-time employee pool, with around 12,400 new hires.

The new R&D spending total for the year is perhaps the most impressive number, since it’s an increase that’s much larger than at any time in the company’s past. Between 2011 and 2010, for instance, R&D spend rose only $600,000, and between 2010 and 2009, grew by only $500,000. The massive jump in the research budget could be accounted for by a number of factors during a year when we saw a number of new products launch.

First, Apple revealed the A6, the first processor it designed on its own in-house, which obviously represents significant expenditure of time and resources. Next, we also had the Retina MacBook Pro (13- and 15-inch) launch this year, as well as the iPad mini and iPhone 5, both spins on existing products but with significant engineering changes. It’s true that a lot of the R&D for those products had to be started before FY 2012, but they still probably had a big impact on the additional $1 billion spent. Specifically, the iPad mini with its extremely slim and lightweight design but similar battery life to the much larger iPad must have been a challenge to bring to market.

The huge uptick in R&D spending could also still mean Apple has a lot more in new products coming next year, but we’ll have to wait and see. 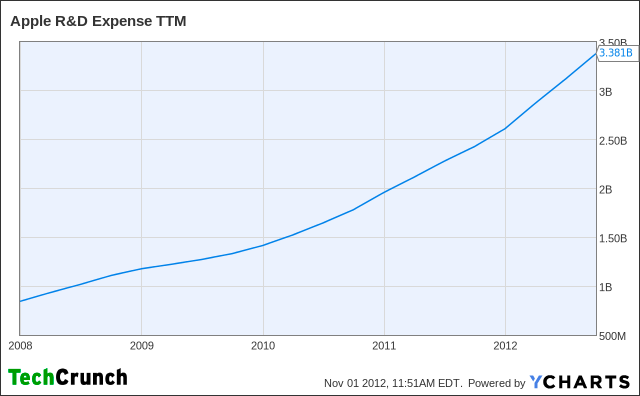