In the endless back and forth between Amazon and B&N, the consumers are the lucky ones. Each product in the Nook and Kindle family have been consistently better and more compelling than the last.

The Nook HD is Barnes & Noble’s latest entry in the great sub-$200 tablet race, and, barring a few hardware issues associated with this sort of underpowered hardware, I’m glad to report that the Nook HD is, in many ways, superior to the Kindle in this iteration, if only for a few key software and hardware features.

Hardware
To the unaided eye the Nook HD looks like a standard Nook reader with a dark screen. Placing the e-ink models next to the HD model offers little in the way of distinction, which is a good thing. Unfortunately, the Nook HD takes cues from the e-ink line with its rubberized plastic bezel and plastic edging. 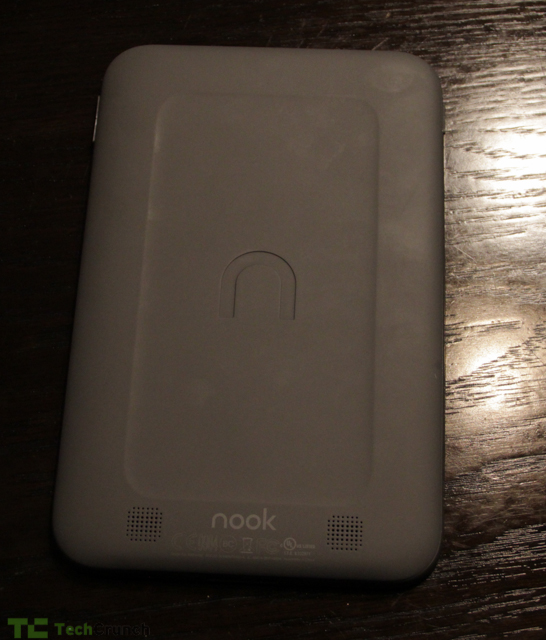 At the bottom is a 30-pin charging and syncing port next to a pinhole LED and MicroSD card slot hidden under a plastic flap. There’s a power button on the left side and volume buttons on the right. A central “Nook” button is at the bottom center of the screen.

The device is 0.43 inches thick compared to .40 inches for the Kindle Fire HD and .28 inches for the iPad Mini. It weighs 11 ounces and is noticeably lighter than the Fire.

The interface itself is very reminiscent of Android with three “front pages” that can hold content as well as a row of icons that bring you to Web, Apps, and Email as well as your Library and a shop Icon. Your latest content appears along the top edge and little tags show when content is new and freshly downloaded.

Pulling down on the top of the screen reveals the settings screen including brightness and Wi-Fi settings. It also has Lock Rotation to ensure you don’t tip books over on their sides as you read.

The Library screen really takes advantage of the device’s high-resolution screen. Because the book icons are so small, it’s clear that the 1440 x 900 pixel screen really comes in handy when viewing content. It doesn’t, however, come in handy on the reading screen. If you’re used to standard definition displays the Nook’s display is glorious. If you’ve seen a Kindle or iPad with Retina display, the amazement is somewhat lessened. However, the text does look like it’s “printed” on the screen and is very crisp and clear.

Reading
The Nook has a very basic book interface with a few valuable features. To move through at title you simply slide left or right and you can select sections to highlight or share. It also has a built-in dictionary. The Nook has a very simple page interface that shows the number of pages you’ve read and the number of pages remaining in the book. You can also search inside books.

The reader supports multiple type sizes and faces and you can set the margins and page color including high-contrast “themes” that display white text on a brown or black background. There is also a very simple multi-tasking interface that pops up allowing you to move from the reader to another app on the device.

In practice, the Nook HD isn’t much different than any other reader out there. It offers smooth, clear, and well-rendered text on a bright screen. In short, it does its job well. 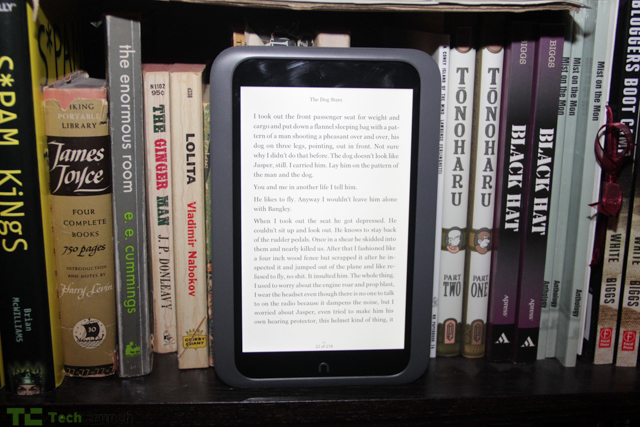 In short, the reading functionality is as expected. While I’m still partial to e-ink readers, the high-res screen offers excellent contrast and readability from various angles. Outdoor viewing is washed out by the sun but in general you will have an adequate experience in any light.

Catalogs and Magazines
Rich content is where the device really shines. The Nook HD has support for magazines and, most recently, color catalogs. You can subscribe to catalogs just like you would a magazine title and you can “save” pages from magazines and catalogs to a scrapbook file. This allows you to create notebooks based on various interests or you can plan your shopping by dragging pages down to the scrapbook. 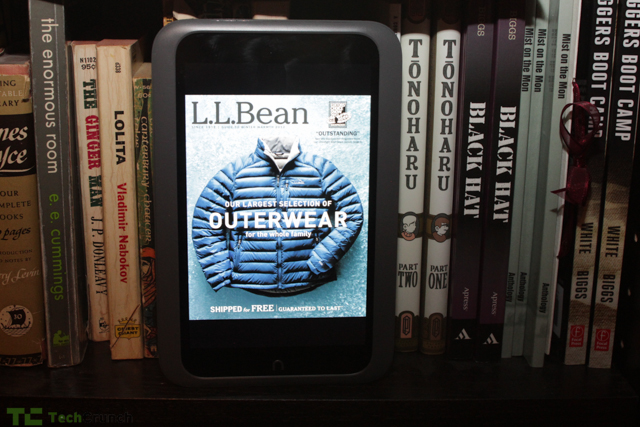 The magazines have a unique page-turning effect that makes things look at bit more realistic. You can also view individual stories in an “article” view which pulls them out of the normal magazine flow. 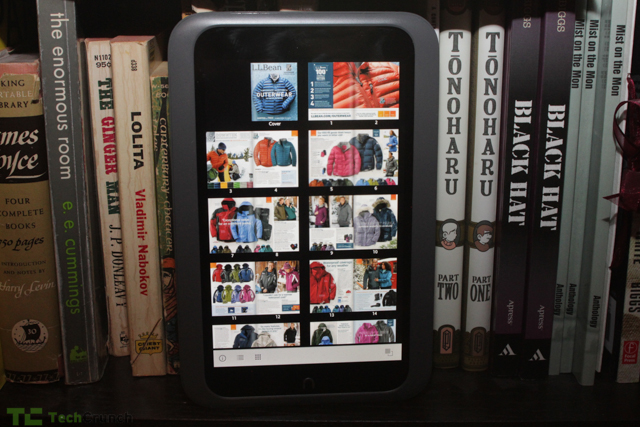 These titles really make the Nook HD more compelling to the casual reader. One of the biggest hurdles in “trusting” readers is the consumption of magazine content. This, along with Conde Nast’s acceptable reader on iOS, makes it all the more easier to move from the printed page to the screen.

Video
The Nook HD displays video at 720p and can output 1080p via HDMI. It has content from HBO, STARZ, Viacom, Warner Bros, and Walt Disney as well NBC Universal and 20th Century Fox. You can stream or download video content and you can pull content from your UltraViolet physical/digital content purchases which allows folks who have invested in Blu-Ray to get content over the Internet.

While writing this review many of the video offerings weren’t yet turned on but I was able to watch the new Sherlock Holmes movie and found it, again, adequate if not superior to the Kindle. 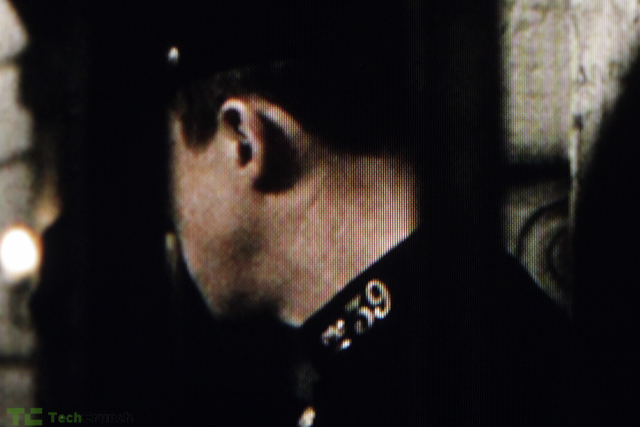 The resolution is fine – the screen is sharper, obviously, than the Retina iPad but some of the apps are still slightly less than HD resolution. Video is a pleasure to watch on this small screen and barring issues with storage I could see this as a valuable addition to a road warrior’s media diet. The opening scenes of Midnight In Paris for example, are glorious. As Woody Allen grabs scenes from the Parisian streets you’re reminded that this is really an HD screen.

Email and Calendar
The less said about these tools the better. My experience with them was limited and they’re definitely an afterthought. If you’re checking email on your Nook then you’ve purchased this as a pseudo personal information manager and you will, to quote a favorite meme, have a bad time. You can view and open Microsoft Office files on this device and the Calendar does sync with various servers.

This is not a computing device. It can offer some tacit head nods in the direction of office applications but no one would be fooled into preparing a presentation or a spreadsheet on this thing.

Apps
The most important thing to note about the apps available for this device is that they can be catered to certain users. One user can place her favorite apps front and center while another can set up another selection of apps. Users can download their own content as well. Interestingly, however, the device only supports one account at a time and the “views” are simply slices of the same account. You can also lock down a number of features, ensuring kids can’t stream video but can, for example, view books. 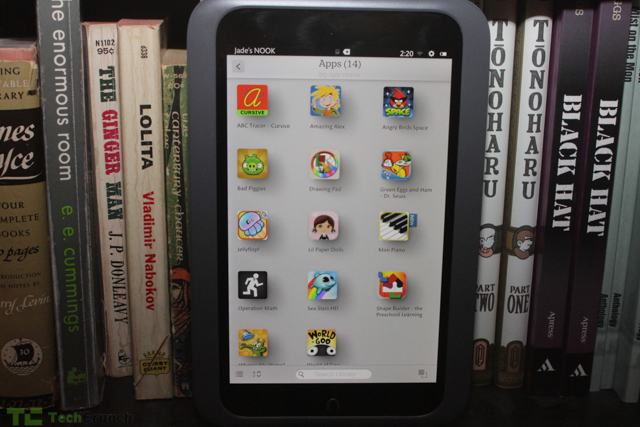 There are about 6,000 Nook apps available right now – not a huge number – but most of the favorites are available. Again, this is not an app-driven device and is far more focused on media consumption.

The Good
I’m a big fan of $199 tablets. At this point in the game the tablet you get – a solid, HD-quality screen and acceptable processor – and the value for money is excellent. However, I would not recommend this tablet to anyone other than a casual user or a reader looking for an upgrade to the Kindle Fire or the original Nook tablet. In terms of usability this is one step above a Nexus 7, which is saying quite a bit, and it’s a solid, useful ereader for folks looking specifically for something to use as a reader and video viewer. The magazine and catalog viewing capabilities are a bit of gravy on the mashed potatoes.

Does it, for example, replace an iPad? It does not. However, as a second tablet for the bedside and or for consuming media, the Nook HD deserves serious consideration. Just remember the Nook HD’s limitations and you can’t go wrong.

The Bad
The Nook HD suffers from a degree of lag that is immediately noticeable when using various functions. Although reading is quite streamlined, there’s a noticeable jitter when launching new apps or bringing up new screens. Web browsing on busy pages – TechCrunch included – is also noticeably slower than the Kindle Fire or Nexus 7. Part of that has to do with how the various browsers render pages – Chrome on the Nexus 7, for example, shows text before images – but the lag is far too persistent to ignore.

Luckily, it’s not as visible when playing casual games like Fruit Ninja and Angry Birds, which seem to have become the de facto standard for performance on these devices. I once worried about a race to the bottom when it came to tablet pricing and performance. Instead, we’ve seen a willingness for these players to essentially eat the cost of the devices in order to sell content. For Amazon this is an acceptable goal. For B&N I’d worry that they may be playing a game that they can no longer win. Time will tell.
[slideshow]

Bottom Line
The Nook HD is one of the best color e-readers out there. With the addition of more magazine and catalog content, as well as video content, it’s really giving Amazon a run for its money. At $199 it’s on par with anything else out there and, more important, it surpasses anything else in the Nook catalog. If you’re looking for a solid, standalone reader with lots of media chops you could do worse than picking up one of these this holiday.