FlockTag, a loyalty card startup built by SideCar co-founder Adrian Fortino (who has since left SideCar to focus on this project), has been quietly flying under the radar, growing its CRM solution for small businesses over the past six months. Today, the company reaches 60,000 users across 100 businesses, primarily in the midwest. And here’s the really odd part: it’s an NFC-based solution.

Yes, NFC. The same tap-to-interact/tap-to-pay technology which Apple has notably shunned in its iPhone devices, leaving others like Google Wallet and carrier-led Isis to try to push the technology forward as a mobile payment alternative here in the U.S. But NFC doesn’t have to be just about mobile payments. At its core, it’s simply a way to exchange data between two devices – and that’s how FlockTag is using it today. The company provides businesses with an NFC reader, NFC-enabled loyalty cards to distribute to customers, an Acer Android tablet, and a mounting system. The complete package ranges from $100/month to around $200/month.

But why NFC, you may ask? “NFC is wildly more convenient than a QR code,” Fortino explains. “People still have trouble understanding QR codes. We think NFC is going to win as the basis of the mobile wallet.” 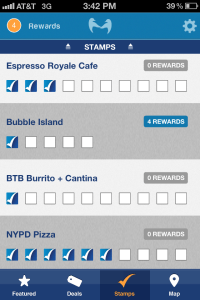 Yes, that’s a big bet in an uncertain future, but that’s what the team at FlockTag believes.

“We think we can build one of the first, one of the most expansive, NFC infrastructures for businesses,” Fortino adds, saying that the FlockTag system will also be ready to make the shift to mobile when the time is ready. For now, however, NFC on the customer’s side consists of cards – you know, physical loyalty cards. FlockTag’s mobile app is only used to check reward balances.

The small business owner can configure the system to their own liking, doling out offers and loyalty rewards as they see fit. Buy 10 subs, get one free. Get a free small coffee with pastry purchase, etc., etc. Those rewards can be used to encourage repeat business or higher spending, for example, or they can be used to draw in new customers by offering a discount or other type of deal.

And it doesn’t have to be a one-size-fits-all system, either. On the backend, the business owner can view the customer’s behavior, including what they like and what they tend to purchase, and that data can then be used to build personalized and customized deals. “It’s the first offering that’s truly closed loop,” says Fortino. “It proves to the business what a marketing campaign would do in profit. We’re able to show that: ‘these campaigns drew in these people who bought this product and this is cost of goods on this product, so this is the gross profit that’s driven by that.‘” 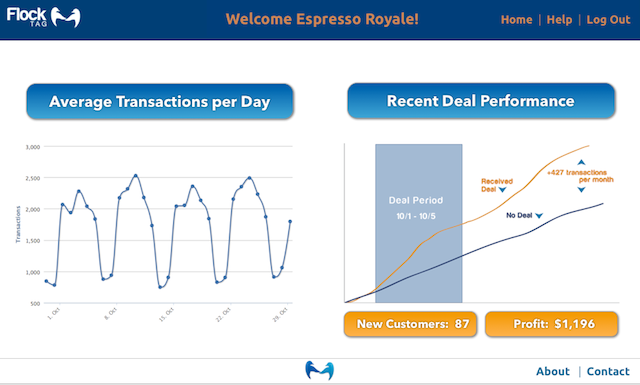 The majority of FlockTag’s customers are quick-serve restaurants and cafes, but the company has some traction in dine-in restaurants and bars, as well. Currently, the company is active in five cities: Bloomington, Indiana; Champaign, Illinois; Ann Arbor, Michigan; East Lansing, Michigan; and Columbus, Ohio. It’s also now expanding to Detroit, Grand Rapids and Indianapolis.

Co-founded with Dave Lin, the now 10-person company has raised a $700,000 seed round from local investors, including the Amherst fund.