A new iPhone application called Beamr, launching today, allows users to share high-resolution 8 megapixel photos and 28 megapixel panorama photos more easily, without reducing image quality. The app does so using a technology called JPEGmini, which had previously only been available for Mac desktops and server applications.

Many iPhone users are unaware that when they use photo-sharing tools and applications, the quality of their photos is reduced. For example, when uploading a photo from the iPhone to Facebook, the quality is reduced by 90%, going from 8 MP to 0.7 MP. With Beamr, however, those photos can be shared with family and friends via email, Facebook, or Twitter, without image quality reduction.

What’s making this possible is JPEGmini, a photo compression technology that first debuted last September, promising image reductions of up to five times. “We invested three years of research using our top image scientists in finding a mathematical formula that really simulates the human vision and gives results that are very highly correlated with subjective results about the image quality,” explains Dror Gill, co-founder and CTO at JPEGMini, makers of Beamr. (This page on the JPEGmini website has more technical details).

Gill, a pioneer in online streaming and VoIP while at IBM, says the company now has 28 patent applications surrounding this technology they’ve created, with filings here in the U.S., Europe and Japan, and they’re now working to bring their video compression technology to the new Beamr app as well. “Our grand vision is reducing the file size and bitrate without reducing the image quality,” Gill says. 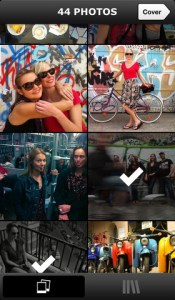 The company also has two other products on the market. On is the consumer-facing JPEGmini app, mentioned above, which lets users save disk space on their Mac by optimizing photos locally. The other is the enterprise-facing JPEGmini for Server, used by large websites to optimize their page load times. Due to NDAs, Gill can’t talk about the company’s enterprise customers, but says they include some of the “top web portals and e-commerce websites” in the U.S., Japan and India.

Now, with Beamr, the company is porting that same JPEGmini technology to mobile in order to solve the problem of transferring media files over the cellular network.

The app itself is very simple to use. When you first launch Beamr, you’re presented with your Camera Roll, and you just select the photos you want to share. In the next step, you pick one photo as your “magazine cover” and then choose how you want to share the photos (email, Facebook or Twitter.) While there are plenty of other applications for photo-sharing, Gill explains that Beamr is unique because it’s allowing you to share the full resolution photos (8 MP or 28 MP for panoramas).

When you’re sharing the photos, however, you’re actually sharing a link to a website where recipients can view the photos in an attractive magazine-style layout. Because the app requires no registration in order to be quick and easy to use, the link is not password-protected, but is rather tucked behind an obfuscated URL. From the shared website, recipients can view or download the photos if they choose.

In the future, Beamr will add a similar compression technology for sharing video, and will introduce an Android version as well. Beamr is free in the iTunes App Store here.

Based in Tel Aviv, now has an undisclosed amount of angel funding and is beginning to raise a VC round.