Yahoo is looking to make a clean break with some aspects of its past with Marissa Mayer now at the helm — and one of those, it seems, could be its logo.

A TC reader says that he was asked to take an online survey, “and it turned out to be all about asking me to compare Yahoo’s current logo to a potential new logo,” he tells us. Here is a screenshot from that survey:

Asked about this and whether it was a Yahoo-generated survey, a spokesperson tells us this:

“Yahoo! is continually developing and testing new concepts in an effort to offer the most delightful experiences for users and advertisers, but we don’t have anything new to announce at this time.”

Note the drop of the serif, note that it’s not purple, and note there is still a ! — although there may be other options where Yahoo drops it. Last week Business Insider ran what it says is a leaked copy of the new Yahoo homepage, where the purple also appears to have faded somewhat. Update: A reader has sent us screen shots of that new layout now appearing (see below). The blue in these logos looks a lot closer to the blue in that design, too.

Whether or not a logo can make a big difference to Yahoo’s fortunes is one for debating.

To put it in context, the company earlier this week reported solid, if not stellar, earnings for Q3, beating analyst expectations on revenues of $1.2 billion. Today it announced its first acquisition under their new CEO, the mobile app for recommendations Stamped, and there could be more. There have also been a boatload of new executive hires, from the COO down.

I’ve noticed the reader comments below are leaning pretty heavily to the negative side. I’m not sure I like it much, either, but to be honest, I think logo changes often seem to inspire negative reactions. I suspect the it comes from the fact that, even when there is a point to be made, it seems like a work of vanity when companies redesign them. And people generally love to pierce the vanity balloon.

FWIW, our tipster notes that he likes the current logo better.

Update: The new homepage looks like it is getting rolled out now, at least in some markets and with some people. A reader sent us the below screenshots from a little earlier. He notes that the page features infinite scrolling. As you move down the page more content appears and the top menu bar follows you. 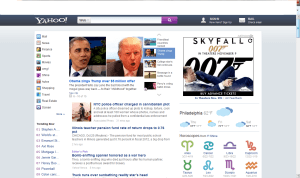 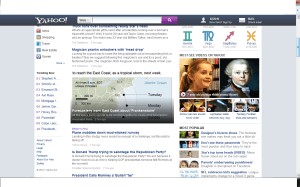