Vineloop, a social recommendations platform which first launched into beta late last year, is today relaunching its mobile app for iPhone offering a completely redesigned user interface, additional categories, a favoriting function and more. And while, yes, there are quite a lot of mobile apps on the market promising to provide the best line-up of recommendations from your friends, Vineloop at least has an original idea of how these recommendations should work.

I’ll admit that when I looked at Vineloop last year, I came away unimpressed. I didn’t care for the user interface at the time, and didn’t feel that it had the potential to make an impact. (Springwise has a review, posted back in December, if you’re curious). Today’s relaunch, however, has me reconsidering. Vineloop looks better and has more to offer now. I’m not fully sold, to be clear, but I’m coming around. The user interface still feels somewhat overwrought, and in its efforts to be original, the startup is crams a lot of new terminology down our throats: “trustlines,” “True10,” and “Pocket,” are terms which everyday users aren’t going to immediately grasp. (Your mileage my vary, as they say.) 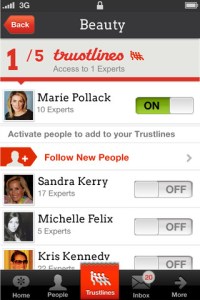 According to CEO, sorry “co-CEO” (ha), and founder Lou Vastardis, the company felt like they had to introduce new words for these features because they’re entirely new concepts.

Well, that’s not true with “Pocket” – it means favoriting/saving for later. But Trustlines is Vineloop’s big draw. Essentially, it solves the “cold start” problem in social apps. That’s when you, early adopter that you are, sign up for a social app and find that only a handful of your friends are using it. Bored, you move on. With Trustlines, though, you gain access to a “trust graph” (as opposed to a “social graph”) of users whose recommendations you can follow. So, let’s say you trust one friend of yours for his excellent wine reviews, then it’s probable that the friends he trusts for their wine reviews also have content you would be interested in. And whomever those friends trust for wine, are likely to be similarly savvy.

In Vineloop, the way this works is that you “activate” people in each category (books, movies, music, etc.) to start serving up their recommendations, as well as those coming from the friends they trust for that same category. In this way, even if you have very few friends on the app itself, you have access to many relevant recommendations. 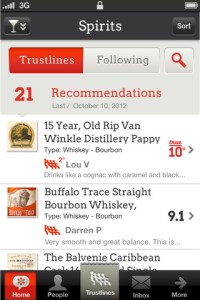 As for “True10,” this is Vineloop’s concept for ratings. In a nutshell, it aims to fix the issue of today’s rating systems. “The problem that’s out there in the marketplace today that everyone’s just continuing to ignore is that whether it’s five stars, likes, emoticons, stamps – it doesn’t matter, they all face the same issue,” explains Vastardis. “The more you use them the more irrelevant they become,” he says.

For example, the first time you rate a wine, you might think “wow, this is the best wine ever!” and give it a “10.” But the more you learn about wine, and the more wines you rate, the more likely it is that the first wine you rated a “10” would now be rated lower. In most rating systems, you would have to go back and manually adjust those earlier ratings. But with the “True10” scale, when you rate another wine a 10, it bumps down the older 10 to something lower. Actually, it asks you to confirm whether or not you want to adjust your previous ratings, because it’s entirely plausible that there are many “10”-level wines out there. However, if you say yes (i.e., “adjust my older ratings”), then your newest 10 becomes a “True10.”

Unfortunately, while it’s certainly an interesting concept, and one that makes a lot of sense, the fact that Vineloop requires so much explanation could be a sticking point for the app. Complexity doesn’t sell on mobile. The best apps are those that don’t “walk you through” how to use them upon first launch because they don’t have to. You can just launch the app and everything makes sense. Vineloop doesn’t offer that experience. There’s a learning curve. That said, if you can overcome that aspect, then you’ll be rewarded with a lot of recommendations even if your entire social network doesn’t sign up.

Vineloop currently offers recommendations for beer, wine, spirits, restaurants, books, movies, music (albums and songs), TV, and beauty. More are on the way, and like other apps in the space, if you like something, you can buy it or book it through affiliate partnerships with Amazon, iTunes, Sephora, OpenTable and others. The app is available now as free download in iTunes.

A Philly-based team of seven, Vineloop has an undisclosed amount of angel funding from local investors.