Flashnotes, a marketplace where students can buy and sell their notes and other course materials, has closed a seed round of $1.8 million as it looks to take its platfrom nationwide, from 75 schools in the U.S. it is in today. The investment has some impressive names behind it. Led by Ryan Moore of Atlas Venture and Jordan Levy of Softbank Capital, it also included participation from a list of well-known angel investors: Michael Lazerow (founder of Buddy Media), Paul Sethi (founder of RedBooks) and Paul Tedeschi (founder of Mr. Youth), Sachin Jade (Klifer Capital) and Abigail Coxsen.

Flashnotes, based in Boston, comes out of the surge in popularity for crowdsourcing, which gives people a cost-effective way of pooling their knowledge and resources into solutions that rival (and sometimes improve on) those provided by large, established organizations. The trend has touched the worlds of funding (Kickstarter), music (Jelli), enterprise data (InfoArmy, among many others), maps (OpenSignal) and much more.

But education — perhaps because of its very nature, based in communication and passing knowledge on from one person to another — seems a particularly ripe area for this particular business model.

Flashnotes works like this: students (right now, older ones in college) can set their own price for notes or learning flashcards that they take or make on a particular subject — the idea being that they are taking these notes for themselves anyway. They then upload these to the marketplace. And when the study materials are sold, the students keep 80% of the price, while Flashnotes gets 20%.

The company says that the community rating system makes sure that people who provide the best notes get the best business, while those who provide less good value for money get voted down — not unlike eBay’s marketplace, or Reddit’s rating system.

Those who are marked as superstar note-takers can be followed for more purchases. Those who buy notes and feel they have been cheated (pun intended) get a money-back guarantee.

Education has been one sector that has perhaps been disrupted most by technology: the internet gives students/teachers access to courses that they may not have ever been able to take/teach in the past; and the ever-falling price for PCs and tablets means more and more of us are getting that kind of access. Apple this week announced that iBooks and iPads are now in use in 2,500 classrooms, from an initiative that it formally kicked off earlier this year with the backing of a number of educational publishers. Software eats education.

That technological transformation is also what is making Flashnotes into a realistic possibility: students are more likely to use a keyboard in class today to type in their notes, or to create materials they themselves will use in their studies. Mike Matousek, the CEO of Flashnotes, says that some 82% of all notes that get uploaded to the marketplace are typed in; the other 18% are scanned. Essentially, this means that for the most part, students, with little in the way of extra effort, are creating products they can sell while they are doing their own work.

And Flashnotes claims that the system works. It says that over 65% of its student buyers have increased their grade point averages by using the platform. (I would argue that we need to see this system rolled out on a wider basis to make such a claim; early adopters often skew results when it comes to the usage of new technology.)

Still, the fact remains that some people are always going to be better and more organised at taking notes, and sometimes it helps to have someone else’s perspective on a subject. So those who have been challenged in that area now have a crack at levelling the playing field, as long as they’re willing to put the work in and study whatever they end up buying off of Flashnotes. This is part of what motivated the company’s new backers to invest:

“High-quality class specific content can make a big difference in learning,” Jordan Levy, partner at Softbank Capital, said in a statement. He also thinks that instilling a little capitalism into the process can also be a driver for success. “By allowing students to earn significant incremental income, Flashnotes provides an incentive for students to take the best notes possible.”

Indeed, Matousek tells me that Flashnotes has had students who have made over $500 a week selling their notes on the platform. “Our average price per note is around $7.88, with a range of $1.99-$36.00,” he says. As a comparison, Flashnotes’ biggest competitor, Notehall.com (which was acquired by Chegg), requires students to take a subscription to use its service, and the commission for each sale of notes is between $.50 and $2.00.

“Flashnotes has made superior quality the foundation of its business and the standard to which it holds itself,” said Ryan Moore, partner at Atlas Venture, in a statement.  “That’s the reason for its rapid adoption and popularity with students; and it will serve them well as they enter new markets and roll out innovative new offerings.”

And given the startup’s momentum, those offerings will come. In addition to plans for a nationwide rollout, Matousek says that the company has had 1,000% growth month-on-month in terms of adoption, although it is not releasing specific user metrics right now. “We have consistently had under 10% of our active users selling, which shows we are gathering only the top quality notes takers in each class,” he says.

As the service grows out, it may see some growing pains. One issue is that some may question whether it is right for students to turn their learning experiences into business ventures. (An issue some are already raising to some extent.)

New products will include video — although if this involves filming teachers giving lectures this also could become complicated and problematic — as well as the ability for students to connect in real time. Also, more technology in general: “Our sellers have told us they spend hours and hours making their study guides to help their classmates and our goal is to arm with the latest technologies to enhance their abilities,” he tells me. To that end, Flashnotes and Matousek plan to start raising its A Round next year. 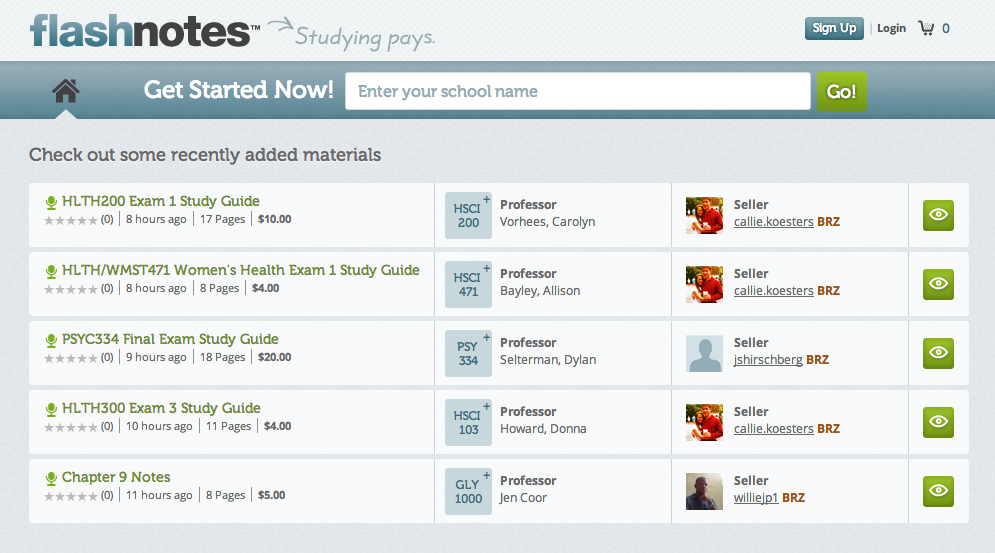