You probably won’t see the revenue bump in Facebook’s earnings report today from all its new monetization schemes. But with this quarter’s rollout of Gifts, a mobile ad network, app install ads, FBX, and Sponsored Results, Facebook tried show the world that it has new engines to power profits. Earnings and share price may drag for a while longer, but here’s how they have the potential to kick into high gear eventually.

Facebook VP of corporate development Vaughn Smith said at a conference last week, “It’s funny to reflect back that in the first quarter of this year we had no ads on our mobile product.” Wall Street sure didn’t get the joke. Facebook’s user base is shifting to the small screen, and investors were right to worry the social network might not have a way to squeeze dollars from them there. That’s partly why its share price has stumbled to $19.32 down from $38 where $FB IPO’d. 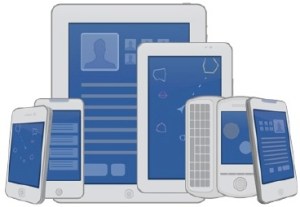 So Facebook has been pushing itself through a transformation to become a company that thinks mobile first. From a product development standpoint, that shift has been rapid. A year ago it was designing for the web and then porting those designs to mobile. Now Facebook spec’s out products with mobile as the priority. Most teams ship their own mobile code too, instead of relying on a specific “mobile” team like it did last year.

But transforming into a mobile money-maker takes longer and Facebook still has to prove it’s possible. When it builds new commerce channels, it has to raise awareness and then get people actually opening their wallets. When it offers new ways to advertise, it must demonstrate to businesses that the ads deliver return on investment, and then recruit big spenders to buy them. It could take several quarters for the bump from new monetization schemes to appear in the bottom line if they even work.

Facebook’s existing mobile ad formats are performing well and all the ads tech companies say businesses are eager to buy them. But Facebook needs whole new ways to make money if it’s going to get to a more reasonable price-to-earnings ratio.

So let’s take a look at the five big revenue drivers Facebook announced or implemented this quarter, and how close they are to actually giving it a revenue boost: 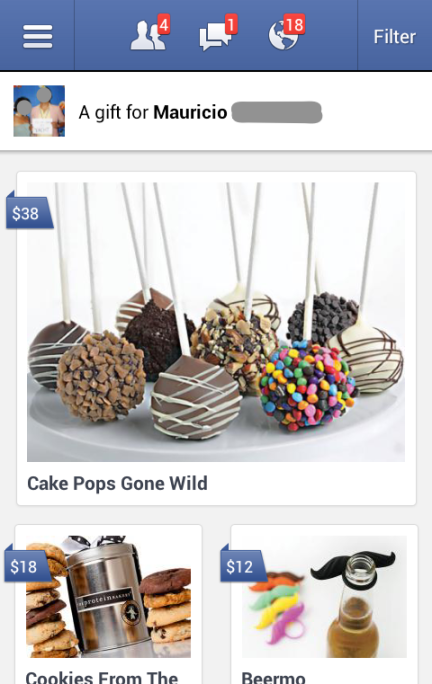 Launched September 27th, Facebook Gifts is the company’s big entrance into ecommerce that lets users buy presents for friends when it’s their birthday, wedding, engagement, graduation, other special occasion, or just whenever. Users see alerts about these special occasions and a chance to buy Gifts on the top right of the desktop homepage and at the top of the mobile news feed. The gifts range from digital gift cards to physical shipments of flowers, chocolate or toys that Facebook sources from and has delivered by its partners. Facebook earns an undisclosed, varying revenue cut on each gift sold.

Facebook Gifts has big potential because it knows who people are likely to buy gifts for better than anyone else. Whose statuses we like, who we have the most friends in common with, who our family members are, and who we’re tagged in photos with all factor into its affinity rankings. Many people visit daily and spend lots of time on Facebook, so there are plenty of opportunities to get them to purchase.’

Facebook also built the shopping experience around convenience, using profile data to suggest what people should buy friends. Young dude? It’ll say to buy him Bourbon-barrel aged maple syrup. Middle aged woman? A Starbucks card or box of chocolate might be the top recommendations. It could get people to buy gifts when they otherwise might just say “happy birthday”, and could pull dollars away from Amazon, gift card providers, flower delivery services, and brick-and-mortar stores.

Unfortunately, even if a reasonable percentage of US users bought a few Gifts a year, the margins may not be big enough to seriously move the needle. There’s also no international roll out in sight. In any case, that would definitely complicate shipping and many markets don’t have the disposable income to buy Gifts. Facebook may need to find a way to convince people in its key markets to buy as often as once every two months for Gifts.

Status: Gifts is still being slowly rolled out to U.S. users. By the end of next quarter it should have reached most of the U.S. and we may hear if people are actually buying Gifts.

Announced September 18th, Facebook’s mobile ad network allows advertisers to pay it to improve the targeting of ads they buy within non-Facebook mobile apps and sites. It solves a major problem for both ad buyers and sellers — namely that ads are often inaccurately targeted. That means a buyer’s message doesn’t reach the right audience and they don’t get clicks. Meanwhile, ad hosts like apps and website can’t charge advertisers for clicks and the irrelevant content worsens the experience for their users. 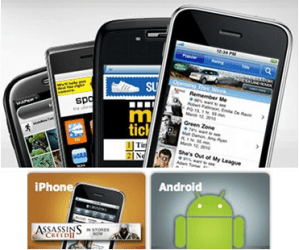 While traditional ad networks make educated guesses about who their visitors are, Facebook knows a ton about its users because they volunteer their data. With Facebook’s bio, social, and app usage data, this new mobile ad network lets marketing messages be pinpointed to appear to 30-year-old engaged women, 26-year-old guys who Like surfing and live in Los Angeles, or 22-year-old recent Harvard alumni who use apps similar to one made by an advertiser.

The mobile ad network is huge for Facebook because it earns the company more money without forcing it put more ads or commerce options in its own apps. That lets it maintain the quality of its user experience, and avoid drowning out organic social content with paid ads. As the Internet is increasingly accessed through apps that need ways to monetize, Facebook could earn a lot of money by getting them to host its ads.

Status: Facebook’s still calling this a test, and only a few trusted partners can use it. Facebook hasn’t released details of the ad network’s partners, design, or performance, and it is unlikely to have produced noticeable revenue yet. But mobile ad spend nearly doubled this year, and Facebook could rollout expand the similar ad network for the web that it’s testing on Zynga.com. By next quarter there should studies available on its performance. It should also be accessible to more advertisers and visible on more apps. In 6 months we’ll see if it’s gained traction.

Announced on August 7th, app install ads allow developers to pay to inject “Install Now” ads into the mobile news feed. They show their app’s name, icon, description, Facebook App Center rating, and friends who use them. When clicked they lead straight to the App Store or Google Play market where users can download the apps.

If the mobile web is all about apps, Facebook wants to be the way developers pay to get people to discover and install them. There’s already a huge industry around paid app discovery that Facebook is vying for a cut of. It could succeed by leveraging the amount of time users spend browsing its mobile apps and the knowledge of which apps their friends use. 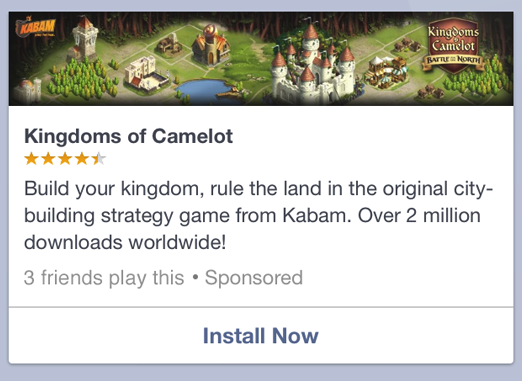 Mobile app install ads are also Facebook’s first serious foray into showing non-social ads in the news feed, which includes some risk.. Friends don’t have to have Liked a developer or used an app for ads promoting it to show up in someones feed. As showing too many of these pure ads could drive users way, the revenue Facebook could earn on them is constrained.

Status: Last week all developers gained the ability to buy app install ads. Expect studies on their performance to arrive soon and Facebook to highlight the money they’re generating in its Q4 earnings.

Though it was revealed late in the previous quarter on June 13th, we didn’t hear the first results from the Facebook Exchange (FBX) cookie-based retargeted ads program until late August. FBX lets advertisers target their ads on Facebook to users who’ve recently visited specific websites. For example a travel company could target users who viewed but didn’t buy a flight to Hawaii with ads promoting that same flight.

The early rumors said they were working very well, and by September Facebook permitted the demand-side platforms that buy the ads to share performance results, which were extremely promising. For some advertisers, each dollar they spent on FBX ads brought in $16 in sales. And I’ve heard that while DSPs are still learning how to use FBX, they are getting as good of results from it as they get from Google’s retargeted ads that they’ve been buying and optimizing for years.

FBX lets Facebook break into the realm of advertising to people with purchase intent, similar to search ads. Because the return on investment can be linked more directly to ad spend, advertisers may be willing to pay more for FBX ads than the traditional brand advertising seen on Facebook. Many advertisers have specific budgets for retargeted ads that Facebook can now tap into. If it can provide conclusive evidence that FBX works better than Google’s ad exchange, massive spend could pour in.

Status: Over a dozen DSP partners can now buy FBX ads, initial results are strong, and more advertisers are getting excited about the program. They’ll still need time to learn how to master the ad format, but we may see notable revenue from the product on the earnings call. By next quarter spend should ramp up and FBX could become a significant part of Facebook’s business.

Facebook doesn’t have a full-fledged web search engine yet, but on August 22nd it officially launched its Sponsored Results ads for the site’s search typeahead. These let businesses pay to have their Page, app, or other Facebook property appear above organic results when users search for a specific property. For example, gaming company Playdom currently pays to show its game Marvel: Avengers Alliance at the top of typeahead results when people search for “Mafia Wars”, a game by its competitor Zynga. 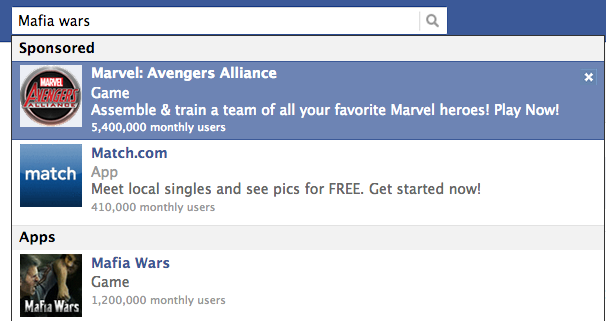 Initially announced in the previous quarter, these last few months saw the rollout of the API for buying Sponsored Results, and the first reports of the performance. Optimal attained click through rates between 0.7% and 4.1%, well over 10x better than standard Facebook sidebar ads. Meanwhile Nanigans saw CTR exceed 3% in some campaigns, and found the ads could cost less than standard ads.

Sponsored Results are a powerful way for businesses to divert traffic to themselves and away from competitors, making them a lucrative buy in cut-throat industries. Their performance and advertiser interest bodes well for the money-making potential of a real Facebook web search engine — something CEO Mark Zuckerberg said is in the works and investors are salivating over. But for now, there may not be enough people searching in the typeahead for these to be hugely profitable.

Status: Sponsored Results can now be purchased through the Ads API and Power Editor, and are now appearing in the typeahead results of search for many popular apps and Pages. They may have already generated a little revenue, which could grow next quarter. More important, though, is how they foreshadowing a serious Facebook search ads business — a completely new monetization channel.

It’s Gonna Get Worse Before It Gets Better

Until these products gain traction, Facebook’s earnings may not be too impressive. And next month, nearly 1.2 billion additional shares will become eligible for sale by employees and investors when a big part of the company’s stock lock-up expires on November 16th. That means the share price is likely to dip lower.

$FB may rise again once this major post-lockup flood subsides and these new money-makers kick in, but at least until then Facebook will need to sell Wall Street on the future, not the present. It has to communicate that the evolution of advertising and commerce depend on the data only Facebook has.