Take that, Rakuten! Amazon continues to extend its reach into new markets and increase its focus in Asia: today it announced pre-orders for its first Japanese-language Kindle, the Paperwhite, and, in another first, it has now extended its Kindle Store into Japan, opening with 50,000 titles in the library. It also today made Japan the latest market for Amazon’s Kindle Fire tablets: it kicked off sales of the Kindle Fire HD and Kindle Fire in the country.

The news comes as Amazon’s local rival, Rakuten, continues to press ahead with its ambition to match and beat Amazon at its own game both at home and further afield. In addition to is main business selling books and other goods online, Rakuten recently also introduced its own e-reader, the Kobo Touch Reader, aiming it at the same low-cost market as Amazon by pricing it at $99. Rakuten in May made a $100 million investment in Pinterest, which it has already started to leverage by integrating its marketplace with the platform.

Given that Amazon has already been selling books in Japan for the past 12 years, it has definitely not rushed to launch its Kindle line in Japan — so is today’s news a sign that it must now be feeling Rakuten’s rivalry?

“After twelve years of selling print books on Amazon.co.jp, we are excited to offer the millions of Amazon.co.jp customers the new Kindle Store, with the largest selection of the books people want to read, the largest selection of Oricon best sellers in books, bunko, and manga, and over 50,000 Japanese-language titles—all available to anyone with a Kindle Paperwhite, Kindle Fire, Android phone, Android tablet, iPhone, or iPad,” said Jeff Bezos, Amazon.com Founder and CEO. 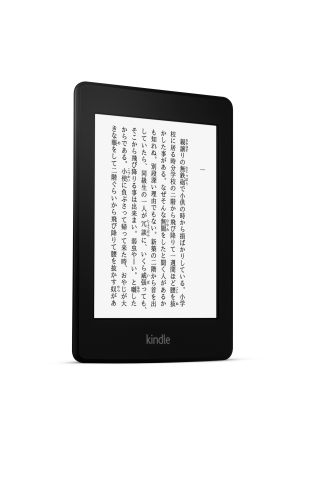 Among the 50,000 Japanese-language titles in the new store, 10,000 will be free. There is also a strong emphasis on graphic literature, hugely popular in Japan, with 15,000 manga titles.

The Kindle Store, Amazon says, will open for business October 25 with some 68 Japanese-language titles exclusive to Amazon. Meanwhile, the Kindle Paperwhite will sell for ¥8,480 ($106). Amazon had announced its intention to extend its Kindle brand into Japan in September. That followed with the company extending its mobile app distribution portal to Japan earlier in October.

When Amazon launched its first Kindle e-reader in 2007, the company was criticised for its slow international rollout of the device. The reasons, it seemed, were three-fold: the keyboard issue (for non-English countries); carrier agreements for unlimited data usage; and trying to get the right mix of localized e-book content.

The move to touchscreen, keyboard-free devices, however, has made the hardware element of going international significantly easier for the company. The growing use of tablets and e-readers, meanwhile, has given rise to significantly more content available for the devices. Lastly, the fact that many are using WiFi as the primary way of connecting their new devices means that the company has less of a need to iron out local carrier negotiations.

It also helps Amazon immensely to make its device footprint as wide as possible. Not only does that mean much better economies of scale for making the device, but given that it’s pinning at least some of its hope on advertising revenues generated on those devices, increasing the number of Kindle users will be a crucial part of that strategy.

Amazon also today announced the Kindle Store on Amazon.co.jp, offering customers the largest selection of digital best sellers in Japan, with the most titles from this week’s Oricon top 100 books, top 50 bunko, and top 100 manga lists and a total of over 50,000 Japanese-language Kindle books including over 10,000 free Japanese titles and a broad selection of works from a wide range of leading Japanese authors and publishers. In total, the store offers over one million titles, including the largest selection of best sellers in English and other languages. For fans of manga, Kindle delivers the best experience, rendered beautifully on Kindle Paperwhite, and with the largest number of manga best sellers and over 15,000 manga titles overall. The Japanese Kindle Store will launch on October 25.

“After twelve years of selling print books on Amazon.co.jp, we are excited to offer the millions of Amazon.co.jp customers the new Kindle Store, with the largest selection of the books people want to read, the largest selection of Oricon best sellers in books, bunko, and manga, and over 50,000 Japanese-language titles—all available to anyone with a Kindle Paperwhite, Kindle Fire, Android phone, Android tablet, iPhone, or iPad,” said Jeff Bezos, Amazon.com Founder and CEO. “Kindle Paperwhite is the Kindle e-reader we have always wanted to build—it has 62% more pixels and 25% higher contrast than the previous generation Kindle, built-in front light, perfect for reading in bed or in sunlight, even thinner, with 8 weeks of battery life.”

The leading best seller selection in the Japanese Kindle Store includes popular book titles such as “Mitsukuni Den,” “Tsunagu,” and “Jinsei Ga Tokimeku Katazuke No Maho 2” and works from authors such as Arimasa Osawa with his entire “Shinjukuzame” series, and Yusuke Kishi with the special limited edition of his best-selling fiction “Shinsekai Yori” only available at Amazon, with a total of 68 exclusive titles. Manga titles include the latest best seller series “Magi,” “Termae Romae,” and the world-famous “Neon Genesis Evangelion,” of which the latest volume # 13 comes out on Nov. 2 and is available for digital pre-order only at Amazon. The 50,000 Japanese-language titles come from a wide range of publishers small and large, including Bungeishunju, Gentosha, Kadokawa, Kodansha, Shinchosha, Shogakukan and Shueisha, all of whom have worked with Amazon to make their titles available in the Kindle Store.

TOKYO–(BUSINESS WIRE)–Oct. 24, 2012– (NASDAQ:AMZN)—Today, Amazon.co.jp is excited to announce that the all-new Kindle Fire and Kindle Fire HD are coming to Japan, giving Japanese customers access to Amazon’s vast selection of over 22 million books, manga, apps, games and songs, plus web browsing, email and more. Kindle Fire for ¥12,800 and Kindle Fire HD for ¥15,800 are available for pre-order today and will begin shipping December 19. Kindle Fire HD is already the #1 best-selling item in the world for Amazon.

Kindle Fire HD is the latest generation of the world’s best-selling 7” tablet. Features include:
Stunning customized HD display with in-plane switching, Advanced True Wide polarizing filter and customized laminated touch sensor for 25% less glare with rich color and deep contrast from any viewing angle.
Fastest Wi-Fi of any tablet—dual antenna, dual-band, and MIMO—40% faster downloads, compared to the next fastest tablet.
High-performance processor and graphics engine for snappy and smooth performance.
Exceptional battery life—over 11 hours.
Front-facing HD camera with customized Skype application for video calling from anywhere in the world.
Dual stereo speakers with Dolby Digital Plus audio—the standard in high-end audio—available for the first time on a tablet.
16 GB or 32 GB of local storage, enough to accommodate the larger file sizes of HD content.
Amazon’s vast content ecosystem—over 22 million books, manga, apps, games and songs.
Best cross-platform interoperability, with Amazon apps available on the largest number of devices and platforms so customers can access content anytime, anywhere.
Amazon.co.jp’s top-rated, world-class customer service. Whenever customers shop on Amazon.co.jp, buy a Kindle, or buy Kindle content, they know that they are also getting Amazon’s world-class customer service. Customers have been shopping on Amazon.co.jp for 12 years, and they continue to do so because of the unparalleled, end-to-end customer experience.
Amazon.co.jp is also introducing an all-new upgraded version of the best-selling standard definition Kindle Fire with a faster processor, twice the memory and longer battery life than the original Kindle Fire—all for an even lower breakthrough price—only ¥12,800. Meet the all-new Kindle Fire family at www.amazon.co.jp/kindlefirehd.

“Kindle Fire HD is already the #1 best-selling item in the world for Amazon, and we’re thrilled to make it available for the first time in Japan. It features a stunning customized HD display, the fastest Wi-Fi, exclusive Dolby audio, powerful processor and graphics engine, 16 or 32 GB of storage and 11 hours of battery life,” said Jeff Bezos, Amazon.com Founder and CEO. “Not only does Kindle Fire HD feature the most advanced hardware, it’s also a service. When combined with our unmatched content ecosystem, unmatched cross-platform interoperability, and standard-setting customer service, we hope people will agree that Kindle Fire HD is the best 7” tablet available anywhere, at any price.”