With cameras becoming ever smaller and storage becoming ever cheaper, there will come a day when all of our life’s memories are digitally preserved.

Memoto, a Stockholm-based startup inspired by the Quantified Self movement, is taking a stab at this opportunity with a postage-sized camera that wearers will carry around with them constantly.

It snaps a photo every 30 seconds, keeping a visual trail of your everyday life. A companion online service will store everything, catalog it by time, date and place and even help you pick out the most visually interesting moments.

The company’s launching a campaign on Kickstarter to draw interest. They’re hoping to retail the camera for $279 next year in three colors of graphite grey, white and bright orange. Early backers will get the camera and a one-year web subscription for $199.

So questions: Isn’t that creepy?

Maybe, but actually the company behind Memoto thought about voyeuristic or awkward social situations carefully in designing the camera. For one, the camera doesn’t turn off unless you put it away in darkness. That’s so friends, family or bystanders know with certainty about whether they’re being recorded or not. That’s different from other wearable devices (potentially like Google Glass), where it might not be so clear if you’re being recorded or not. 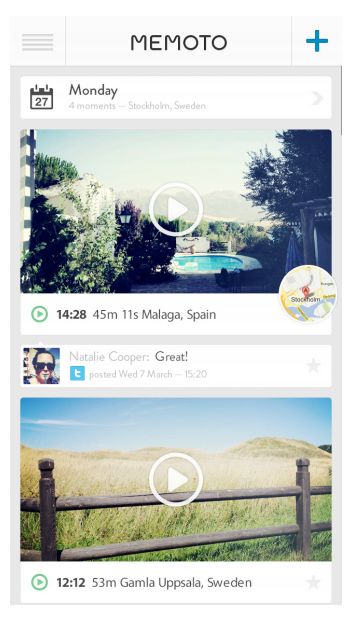 Co-founder Martin Källström started Memoto after transitioning out of his last startup, Twingly, which monitors blogs, tweets and more to track what customers are saying about a company’s products.

He became passionate about the Quantified Self movement and the ideas of Gordon Bell, a Microsoft researcher well-known for his experiments in life-logging.

Kallstrom wanted a way to record unexpected moments in his life, like his children’s first steps. He pointed out that we don’t often remember to record moments or shoot videos as these memories are happening. At the same time, things that don’t seem important at the moment become profoundly meaningful as we look back. Memoto is about being able to retrieve these memories, even if we can’t completely appreciate them as they pass.

As for the camera itself, it takes 5 megapixel resolution images and logs GPS positions and timestamps. It also has a built-in rechargeable battery, which can last up to two days. You wear it with a small, stainless steel clip that attaches to your clothing.