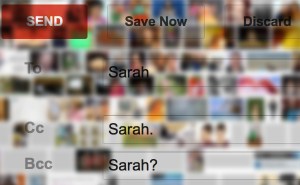 Somewhere out there, a woman named Sarah Perez is probably very frustrated by technology. No, not me, a different Sarah Perez. She signs up at websites to receive information, and it never comes. Friends invite her to gatherings, and she never hears about it. She tries to reset her password, but the password reset never arrives. You see, Sarah’s problem is that, since around 2008, I’ve been getting her email.

I don’t know how the problem started exactly, but the other Sarah Perez can’t seem to remember her email address. It’s not sarah.perez@, as she mistakenly believes. The dot doesn’t matter – the email still comes to me.

This isn’t the only person whose email I’ve mistakenly received. There are also a couple of other Sarahs, who do know their email address, but whose friends can’t keep it straight. For example, when I received Sarah E. Perez’s email, I looked down in the thread and found her actual email address, and forwarded it. She apologized. It never happened again.

Then there are those who are less tech-savvy. One time, Sarah J. Perez’s mom sent me a photo slideshow, so I emailed her back to tell her I wasn’t her Sarah, and to please let her daughter know that this is my address. She then did so, cc:ing me. Her daughter replied all: “I was only in Tampa for a short time,” she wrote her mom. I scratched my head over that one for a minute, but then figured it out. You see, I’m in Tampa. And her mom told her that someone else had her email address in Tampa, so Sarah thought that we had both been assigned the same email because we had both lived in Tampa. Like email was a phone number that had been reassigned.

That was in April 2008. Five months later, Sarah’s mom sent me another photo slideshow.

But outside a couple of odd incidents, the bulk of the misdirected email seems to be for someone (or multiple someones?) who think they are sarah.perez@gmail.com. 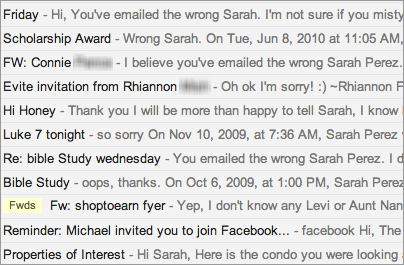 This all started in 2008. I began receiving email during a time when some Sarah Perez was attempting move from New York to Connecticut. At first, I assumed the emails from the apartment searchers and movers were spam. But upon closer inspection, I realized that the companies were emailing me with very specific information – searches that matched a narrow set of criteria, estimates on moving costs, etc. At one point, I emailed one of the companies back to inform them that I was the wrong Sarah. After a couple of tries, it worked. The email stopped.

Not too much later, a friend of Sarah’s emailed me a photo of black chiffon dress she found on eBay. Then things were quiet for a while.

In 2009, I received another note for Sarah. This time a realtor was emailing her details about a condo she was looking at. Wrong Sarah, I told him. Oh sorry, he said. “I forgot to put a ‘.’ between the first and last names,” he replied. I didn’t bother responding. The dot doesn’t matter. Sigh.

A month later, a friend of Sarah’s invited me to Facebook. Two months later, Sarah’s aunt Nancy emailed. Great, now Sarah is giving out the wrong email address to family and friends, I thought. I get enough email as it is, I don’t need someone else’s.

In October 2009, the woman who thinks she’s sarah.perez@ started getting invitations to her Bible study group. I responded again to the sender: wrong Sarah. Oops, came the reply. But in November, I was invited to attend again.

Sarah’s friends may have started catching on at some point because that same month, someone sent out a feeler emailer, saying “just to check and make sure this gets through.” Nope, wrong Sarah, I wrote again. OK, came the reply, I’ll let her know.

2010 rolled around. Sarah’s church friends emailed again, another friend sent her an Evite to a party, and in April, the same friend who had promised me she would let Sarah know that I’ve been getting her personal email, emailed me a second time. This time, she was sending Sarah information about where she could get free healthcare, since she didn’t have any health insurance.

Well, now I was worried. I hope Sarah is OK, I thought. I secretly hoped for more misdirected email after that – you know, just to be sure.

In June 2010, Sarah Perez received a small $500 scholarship from The Red Cross, but I think that might have been for a different Sarah. Maybe a student. In July, Sarah’s friend invited her to a museum outing. And in December 2010, I got an email about the family reunion.

By March 2011, I guess Sarah gave up. She clearly couldn’t remember her email address, so she created a new one. I got that email too, this time, from Google. Apparently, Sarah somehow associated her new email address with her old one. (I have no idea.)

Congratulations on creating your brand new Gmail address,
[redacted]@gmail.com.
Please keep this email for your records, as it contains an
important verification code that you may need should you ever
encounter problems or forget your password.

Oh Sarah, will you never learn?

Yes, I suppose I could have emailed her at her new address, but I didn’t have time to do so when the notification first came through, and based on the numerous password reset requests I’m getting now, I don’t think Sarah can access that new account currently. I missed my window.

Despite the new address, the emails kept coming. I was invited to a bridal shower in summer 2011. In July 2012, a funeral. I did not bring a salad or dessert as requested, but I’m sure somewhere out there Sarah Perez was sorry for your loss. (I just hope she heard about it.) I couldn’t help but glance at the Mission Trip photos attached to the email that arrived last month, but I ignored the “Hey, what’s up” email from Sarah’s boyfriend (?) Jesus and the open house invite in March.

This summer, I guess I gave up, too. I just archived all those password reset emails that came in during August, September and October. Sorry, Sarah, I hope you got back into your new email account. Maybe you should just start over again. May I suggest Hotmail?

In late September, Sarah Perez signed up for Photobucket. I received her account welcome email, and so far, about seven emails confirming her photo uploads. Fortunately for her, Photobucket is password protected when I click through. That’s too bad, because after all these years, I was hoping to get a glimpse of the other Sarah Perez.