If you need more proof that FundersClub wants to radically change startup funding by letting non-VCs invest, it just closed a $6 million seed round, the largest ever from a Y Combinator company. There are still questions about its legality, but investors include A-listers YC, First Round, Chris Dixon, and Aaron Levie. Their support shows Silicon Valley is ready to disrupt itself by inviting the crowd to the cap table.

For those unfamiliar, FundersClub is a website that picks promising startups and lets people invest in them over the web in return for real equity. Anyone who’s an “accredited investor” (earns over $200,000 a year or has a net worth over $1 million) can browse startups with open rounds ranging from a few hundred thousand to a few million dollars. They learn about the businesses, pick ones they believe in, and plop down as little a $1,000. The average investment so far is $2500. All the legal paperwork and money transfer happens right there online.

If one of the startups gets acquired or IPOs, the investors can cash out their stake and FundersClub collects a percentage. That makes this a whole different ball game than the crowdfunding in exchange for rewards like on Kickstarter, and it doesn’t require the JOBS Act.

Since FundersClub only makes money if the startups it hosts succeed, it has a strong incentive to pick the best companies. FundersClub essentially serves as curation layer that attracts investors, in some ways similar to what Y Combinator does. Similar to a venture fund, FundersClub also offers the startups on its platform advice and connections to potential employees, so it does have some value-add beyond routing money. 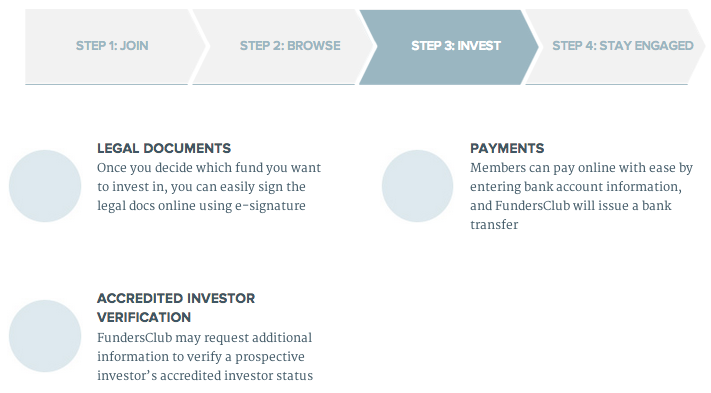 So far it’s been a hit. FundersClub has seen 3,400 investors register. About 340 have actually invested, ponying up a total of around several million to close rounds for five startups including several YC companies. FundersClub raised a pre-seed round of $529,000 for itself on its own platform, and one company raised its target of $100,000 in 48 hours. FundersClub currently has one round open for a 500 Startups company seeking investment, and has a few more readied.

It could get even easier to funnel money to startups get if the legal ban on general solicitation is lifted and companies can actively advertise that they’re raising on FundersClub. And traffic and investment could explode if the JOBS Act passes, allowing anyone to fund startups through FundersClub, not just accredited investors.

But Is It Legal?

There’s one major problem for FundersClub.  I’ve talked to experts in the crowdfunding space who believe there’s a chance it may be violating the Securities Exchange Act of 1934 if it handles money for investors without being a licensed, registered broker dealer. That’s a felony that could trigger huge fines or even get FundersClub’s founders jail time. There are laws against attempting to circumvent SEC regulations, meaning it’s not okay for FundersClub to just find a loophole.

Essentially each of its little venture funds is a single-purpose vehicle for delivering money to a specific company. The SEC has never held up that these are legal. It even saw through and prevented Goldman Sachs when it tried to raise money specifically to invest in Facebook.

FundersClub firmly believes it’s legal because it never handles the money directly, instead raising money for a venture fund that funnels into a startup. The money is kept in separate custodial accounts for each FundersClub fund. It isn’t disclosing details on exactly how the financial back-end works right now, but apparently there’s a reason it hasn’t been shut down.

In a worst-case scenario where the SEC does come down on FundersClub, all its existing crowd investors could get a put right to sell their shares back to the startups or FundersClub. It costs a lot of money, and requires months of training and background checks, but FundersClub may need to consider becoming a registered broker dealer. It could definitely slow down the company and force it to deal with additional regulation, but otherwise it may be exposing itself, its investors, and the startups it hosts to risk.

These legal issues may be why several competitors like New York’s Crowdfunder have not actually started accepting crowd investment yet. Some are waiting and praying for the JOBS Act to pass. The well-known AngelList never touches the money itself to avoid legal trouble. For now, FundersClub could be gaining a big head start and become the name brand for equity crowdfunding in exchange for expending significant effort to navigate the legal risks.

I do hear it has expert legal counsel in the space and contacts at the SEC that believe it’s in the right, so in the end things could turn out fine. For now, though, we’ll have to wait and see how things play out.

So is FundersClub a smart enough idea to be worth investing in despite the risk it could get shut down? Some very smart firms think so. In on the round are First Round Capital, Y Combinator, Draper Associates, Felicis Ventures, Spark Capital, Digital Garage, Intel Capital, the YC-affiliated funds (Andreessen Horowitz, Start Fund, SV Angel, and General Catalyst Partners), Investmon Sàrl; NetPrice; Global Venture Alliance (GVA) and Plug and Play Tech Center.

The $6 million will aid FundersClub to foot the significant legal costs of pioneering in the heavily regulated financial space. It will be able to hire more employees to do due diligence on which startups it should host and convince these entrepreneurs to list on FundersClub. The cash should accelerate development of the site as well, which is currently quite basic.

The seed money could also help FundersClub secure relationships that could bring in huge new sources of investment for the companies it hosts: banks, hedge funds, and private equity firms. We hear investors in these are eager to add startups as a risky asset class to their portfolios. But these institutions don’t have Silicon Valley deal flow. FundersClub could do the research and have feet on the ground in the valley getting access to funding rounds. Since these institutions work with billions of dollars, they could fund fleets of FundersClub startups.

There’s also another audacious item on FundersClub’s roadmap. It wants to offer a new form of structured liquidity to late stage startups. FundersClub would buy up packages of shares from long-time employees and investors that want to cash out before the company gets bought or IPOs. FundersClub could then sell rights to those shares to its crowd investors. Big startups would pay FundersClub for the service of providing a liquidity release valve that assists with retention and delays an IPO. Crowd investors would still be taxed FundersClub’s fee when they cash out upon exit.

Not A Replacement For VC

The mentorship and network that comes with taking on prestigious venture capitalists and angels invaluable. That’s why investment from the crowd will never replace the old model. But sites like FundersClub could let startups take money with fewer strings like board seats or decision pressure attached.

Having an army of investors in addition to a boardroom full of them also has its benefits. These people are incentivized evangelists, product testers, and bridges to customers or talent.

The weight of the crowd with the wisdom of veteran VCs could be a winning combination for startups. That means FundersClub could be a winner for its new investors if its founders can avoid SEC trouble. Now that it has the money though, FundersClub needs to make absolutely sure its legal so it can go on to bring innovation to the world of startup investment.