Tweetbot for Mac has finally arrived in retail release form, after an extended public alpha and beta testing phase. The native OS X Twitter client from celebrated iOS and Mac developer Tapbots is available from the Mac App Store, for the somewhat eyebrow-raising price of $19.99. Is it worth $20? A thousand times yes. But users unfamiliar with Tapbots’ work may balk at paying that much for this kind of app – which is exactly what Tapbots is counting on.

When I asked Tapbots co-founder Paul Haddad about the pricing, he said that it’s intentionally higher than the company originally intended, due mainly to Twitter’s new API token limits, which cap the maximum number of users that the Tweetbot for Mac client can ever support. This limit is determined separate from that enjoyed by Tweetbot for iOS, and as a result can only every accommodate a much smaller group of users. Once the tokens are gone, Tapbots will no longer be able to sell Tweetbot, so in that sense, this is limited edition software in a very real, non-marketing speak sense.

Tapbots spent a lot of time and effort creating Tweetbot for Mac, and they intend to continue supporting it long after they have to stop selling it, so a higher price tag is the result. So while the price tag might be intimidating to those new to Tapbots and Tweetbot, dedicated users will be more than willing to pay, and I don’t expect supply to last all that long. 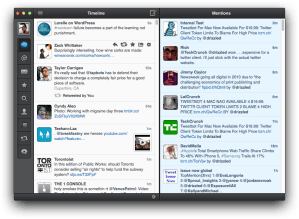 In the meantime, Tapbots wants users to revoke tokens on old versions of Tweetbot if they’re not going to use them, and also to reach out to Twitter and encourage them to suggest raising token limits. I’m a bit skeptical method two will have all that much effect on the social network’s policy changes, but it couldn’t hurt to try.

If you haven’t been using the Tweetbot alpha and beta since its release like I have, let me just say that it’s amazing. I’ve been looking around for a decent replacement for Tweetie since it was acquired by Twitter, and nothing’s come close to Tweetbot. It’s the first app I boot up in the morning and the last I turn off when I shut down for the night. It has real-time streaming, customizable columns, muting features and a whole host of other awesome stuff. Plus, it’s got the best-looking design around. Even at double the $20 asking price, Tweetbot would be a no-brainer.