The world is becoming increasingly populated with robots, and consumers are eating it up. Now, the latest robot to hit the market will help you keep your calories down in the process. PCH International, the company that teams with startups and bigger brands to help manufacture and distribute hardware products, has announced its latest project: a partnership with Intuitive Automata to develop Autom, a $199 “healthcare robot coach” designed to help people lose weight.

Autom, as the robot is called, is designed as a personal lifestyle coach: it takes in data about the person who owns it and gradually adapts its responses to keep you on track. “The more it learns about the individual user, the more it customizes the feedback advice to keep the individual motivated,” the companies said in a statement.

The idea here is that although there are dozens of apps and some hardware on the market today designed to help people stay healthy and eat well — a product of the big interest in “quantified self” technology — having a physical presence sitting in your kitchen, which is learning about and responding to what you do in there, will be a more effective, engaging and fun way of approaching the challenge of losing weight and eating healthy. Intuitive says that this is based on actual research that indicates that robots “create a more powerful and long-lasting relationship with the user than a mobile phone app or a computer.” On top of the $199 price, monthly subscriptions to use the service begin at $19 per user.

Autom looks to be around a foot tall, and in addition to her own active belly, she has a set of eyes that follow you around the room and can blink and wink for extra effect. Watchful eyes in particular seem apt for a robot helping you watch what you eat.

As for the belly, it acts as a kind of dashboard for your food intake, where you can input what you eat, track how many calories you have consumed, and figure out what you need to do to keep yourself in line (that’s the part that presumably shows off how well Autom is getting to know you). Autom talks to you to offer suggestions in an unflappably calm female voice.

The news was announced today by PCH on stage at the Dublin Web Summit. PCH is headquartered in Ireland and manufactures its products in China. Other notable deals PCH has made include a partnership with LittleBits in July to produce the company’s LEGO-style electronic modelling pieces as part of a mass-market push for the hardware company founded by Ayah Bdeir, a TED Fellow and MIT Media Lab alum. In June, PCH also purchased its own design studio Lime Lab to get further involved in the design and production process.

Robots and robotics have had a major boost, with crowdfunding sites like Kickstarter giving inventors a new platform for raising funds and attention for their big ideas. And people who are better known for their software prowess are also investing in robotics. LittleBits is backed by True Ventures and Khosla Ventures. Foundry Group, which has recently raised a $225 million fund, invests in Modular Robots.

And Dmitry Grishin, the CEO of Mail.ru, has his own robotics investment: Grishin Robotics, which recently made its first investment, $225,000 into Double Robotics, a TC Disrupt Hardware Alley finalist.

PCH says that the intention is to produce Autom on a mass scale “to help [Intuitive] cater for huge consumer demand.” A spokesperson for the company says confirmed delivery will be in Q2 2013 at the latest. But here you can see a larger-than-life version on stage from earlier today. Below is the actual size as it will appear on your kitchen counter.

Autom is being developed as part of the PCH Accelerator program, which helps hardware startups bring smart ideas to market.

“We have been exploring the new consumer robotics market and have found a perfect opportunity in helping Intuitive Automata scale and bring Autom to market,” said Liam Casey, CEO of PCH International, in a statement today. “Dr. Cory Kidd, founder and CEO of Intuitive, has the vision and energy to make Autom a common device in every home and we are delighted to partner with him to make his vision a reality.”

There’s also a demo video below to show off more of her features. 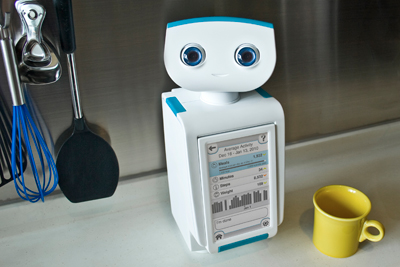