Editor’s note: Peter Vogel is co-founder and CEO of Plink, an online-to-offline loyalty program that rewards members for dining and shopping at their favorite national restaurants and offline stores. Reach him via email or follow him on Twitter.

Startups face an ever-changing series of challenges. Luckily for us, we don’t have to reinvent the wheel every time we face a new problem. There are lots of companies out there that we can learn from, both through their successes and failures—and Facebook’s recent experiment with Credits is a great example.

Facebook made three vital mistakes that doomed the Credits experiment and never gave it a fair chance at success.

Consumers purchased and used Facebook Credits in a vacuum. Consumers who bought Credits typically used them in social games. This is inherently a social activity, where sharing is encouraged (brilliantly, by Game developers like Zynga); however, the process of buying Credits was practically anti-social. Only the end result was shared: a social gamer had more virtual goods to share with their friends, had advanced to a higher level in FarmVille or now had a more elaborately decorated home in The Sims Social. But gamers’ friends didn’t know that they had bought Credits or used Credits as the currency to purchase those goods.

Facebook could have encouraged users to share Credits purchases by offering purchasers a few free Credits to give away to their friends. Imagine receiving the message “John just bought Facebook Credits and thought you might like some, too” along with 5 Free Facebook Credits. That would cost Facebook about $.35* per friend — a pretty low cost for a new customer starting to use Facebook Credits. The actual cost is probably only a fraction of that, because some of John’s friends would never redeem the Credits. (Five Credits has a value of $.50, but Facebook normally keeps 30 percent when redeemed, so they realize a cost of $.35 for every five Credits redeemed.)

Or, what if Facebook offered a Credits purchaser a 25 percent discount on their next purchase of Credits if the user shared or posted about their first purchase? These are two simple ideas, but the point is that there were plenty of missed opportunities for some innovative marketing tactics on Facebook’s part. 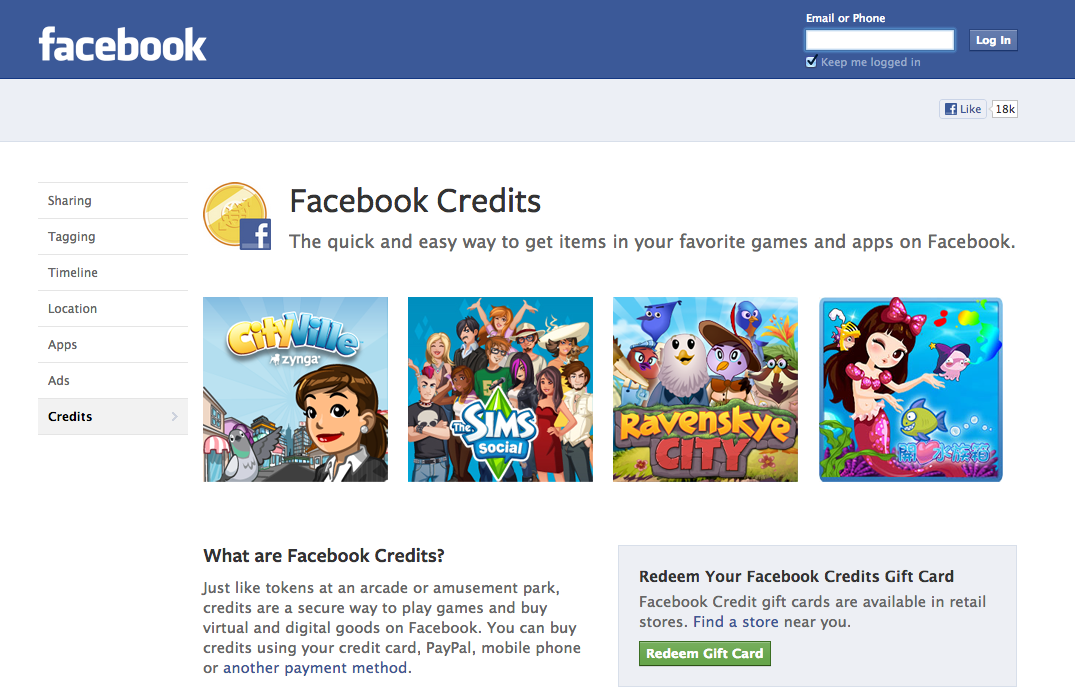 Facebook did experiment with a few ways to encourage adoption by giving away Credits to some users and offering a highly discounted rate on a user’s first purchase of Credits. Crucially, these efforts did not encourage sharing, but instead focused on individual adoption of Credits — getting users to use or buy Credits for the first time, not to share the process or purchase of Credits.

In addition, members are still not allowed to give Facebook Credits to their friends. Credits can only be redeemed in social games or in Facebook’s App Store, not exchanged between friends. Imagine the bounty you could rack up on your birthday if each of your friends who wished you “Happy Birthday!” also gifted you 5-10 Facebook Credits ($.50 to a $1.00). Imagine the revenue Facebook could generate if users regularly started sending each other a Credit for an especially funny comment or great shared picture. Facebook tested this concept at a few colleges in 2009, but ended the test quickly and never publicly shared the results. One can assume that students in that test didn’t care too much about giving or receiving Credits because at the time there was little one could do with them. In fact, if you didn’t play social games, there really wasn’t anything to do with Credits. This is a problem that never went away—Facebook never communicated to users how or why they could use Facebook Credits.

Mistake #2: Facebook Never Made A Case For Caring About Credits

Facebook never made an effort or easy way for users to find places to spend Credits. Why would a user want Facebook Credits if they had no idea what to do with them? Sure, a lot of social gamers probably knew you could use Credits in games to buy virtual goods or level-up faster, but only about 25 percent of Facebook’s users play games. Why would the other 75 percent want Facebook Credits? Unfortunately, Facebook never answered that question.

And there were more ways to use Credits, but members had no central place or listing to discover these ways to “spend” Credits. In 2011 users could have streamed a Widespread Panic concert live for 70 Facebook Credits or watched a variety of movies including The Big Lebowski, Jackass, Dark Knight and several others. In January of 2012, Facebook members could have watched the 2012 International Beer Pong Championships live on Facebook at a cost of 50 Credits. Granted, these examples are not varied enough to be appealing to everyone, but Facebook could have at least provided a central place where users could have found ways to use Credits. Lack of discoverability is one of the reasons why more developers didn’t make ways for users to spend Credits (see below). Why build something if no one will ever see it?

Social gaming flourished on Facebook and became a phenomenon embraced by hundreds of millions, because Facebook provided an open platform where developers could create games and share them with Facebook members, and, as a result, the games spread virally as members played online. The games were easy to find as Facebook then had very loose sharing/posting rules — rules that have since become stricter — that easily allowed members to see what games their friends were playing.

Facebook never created a place where members could find non-gaming ways to spend Credits. They could have placed a category or heading on the user’s home page, such as “Facebook Credits,” which showed users a listing of the various ways to use Credits. Without this central location, members had no way to find ways to spend Credits, except for gaming. And with only 25 percent of users playing games, how could the use of Credits ever reach a tipping point?

Developers were also discouraged from building ways for members to use Credits by Facebook’s 30 percent tax. Every time a member redeemed a $1.00 worth of Credits for virtual goods or a game upgrade, the developer would get $.70 and Facebook would keep $.30. This model may have been financially acceptable (barely) to developers of social games who were essentially selling virtual goods with little or no actual cost to provide, but this was an unworkable model for companies with a real cost of goods. For example, it would have been great to see companies like Netflix or Spotify offer a Facebook subscription where members could watch movies or listen to music for 50 Facebook Credits a month.

But most of these digital media companies pay royalties or licensing fees to utilize the songs and movies they provide to subscribers; often, there just isn’t a 30 percent margin left over to pay Facebook. Before the IPO, Facebook made a vague announcement that it would consider lowering that 30 percent tax on certain verticals, outside of social gaming, but nothing further was announced. By never making this change or providing pricing flexibility to other verticals, Facebook had limited the use of Credits to social gaming, hamstringing the currency from ever having a chance of becoming universally appealing.

Facebook added to the problem of not encouraging users to share Credits by not educating members on what Credits could be used for, and then put the nail in the coffin by financially discouraging developers from building applications or ways for consumers to spend Credits.

Start-ups would be wise to avoid this crippling trifecta of mistakes.