Of the rumor that artists only make $15 a year from streaming services, Westergren said, “that’s far, far from the truth.” Pandora will release a blog post of data on artist earnings soon but gave the SF MusicTech Summit crowd a preview, noting “You’d be surprised by how many artists are making more than the average [US] household income just from Pandora.”

[Disclaimer: Pandora may pay out the amounts it says, but these dollar amounts are actually going to SoundExchange which then splits them between record labels, back up musicians, and the artists themselves. Therefore, Pandora’s announcement may have been a bit deceiving as artists are only actually receiving less than half of what Pandora says it pays them.  Thanks to Billboard’s Glenn Peoples for clearing this up.]

[Update: Pandora has published this blog post noting that over 2,000 artists will earn over $10,000 in the next year from Pandora. Over 800 will earn more $50,000, and artists like Coldplay, Adele, Wiz Khalifa, and Jason Aldean will be paid $1 million each. Finally, extremely popular artists Drake and Lil Wayne are nearing a $3 million annual rate each.]

He said that Pandora accounts for 6.53 percent of U.S. radio listening, but “imagine if it was 30 percent, 40 percent, 50 percent? We’re talking about making a living.” I asked Westergren whether Spotify’s free radio service has had any negative impact on Pandora, and he bluntly responded, “we haven’t seen any impact on growth from anything launched in the last five years.” Westergren followed with a clear explanation of Spotify’s economic troubles. PrivcCo stats reported by The Next Web and confirmed by Spotify indicate that while revenue grew 151 percent to $244.5 million from 2010 to 2011, its net losses went up 60 percent to roughly $59 million.

“Anyone who plays in the radio space has to reckon with the same thing we reckon with, and you know, it’s tough. To become an effective seller of advertising you have to be large. The ‘getting to large’ phase is really expensive, because every additional listening hour comes with a royalty payment, but you’re not that good at advertising so you burn a lot of money. It’s hard to get over the hump.” 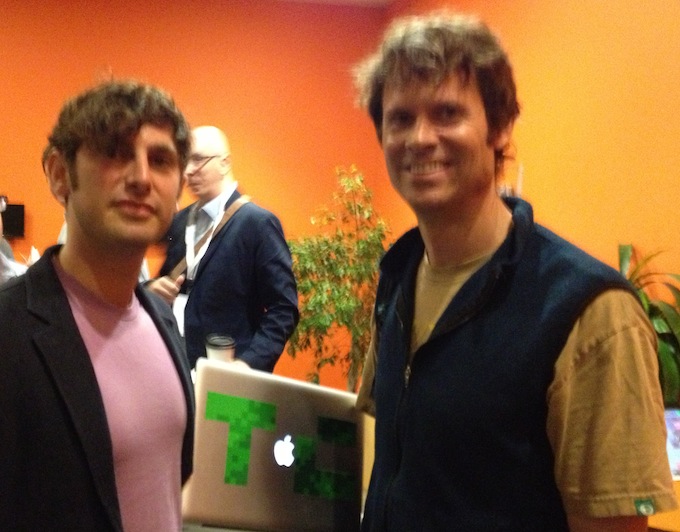 He maintained a confident, defiant tone when I asked if Spotify’s radio service worried Pandora in the long-term. “The only thing that’s worrying me is the royalty situation in Washington.” For his company, and for the benefit of innovation in general, he urged for more reasonable royalty rates to be applied to online radio.

“We want the same standard extended to web radio that currently is being applied to our competitors [satellite radio, cable radio],” pleaded Westergren. After his talk, I asked what the specific impact of high royalty rates was on companies trying to build the future of music listening. Westergren said that:

“A company like ours has a mainstay product like radio [but Pandora also wants to create things that aid] artist to fan connection and local music activation. There’s a big pipeline of features that just sit there because they can’t get prioritized above immediate revenue generators. We have a wall literally covered with ideas that have an engineering cost, and they each get pulled off until the three about optimizing advertising are the only ones left”.

Westergren also denied that his quest to reduce the per-song royalty rates that Pandora pays is fundamentally anti-artist. He said that lower fees would leave more resources to dedicate to building better services. That could increase listening as a whole, thereby earning artists more even if they get paid less per song.