David Cameron, the British Prime Minister, has sent his first tweet. Despite joining Twitter in January 2010 his verified account had never tweeted anything — until a few moments ago, when he said this:

I’m starting Conference with this new Twitter feed about my role as Conservative Leader. I promise there won’t be “too many tweets…”

The “too many tweets…” comment is a reference to a radio interview in 2009 in which Cameron was asked for his views on Twitter, and whether he might start tweeting, and he replied: “The trouble with Twitter, the instantness of it – too many twits might make a twat.” (The Guardian has a video clip of the moment here.)

Use of the word “twat” on a live breakfast radio show got Cameron into a spot of instant hot water — and he subsequently apologised for his choice of words.

The PM’s office tweets coalition government-related policy pronouncements and updates from the @Number10gov account. But of course Cameron can’t use an official government channel to discuss Conservative Party-specific issues — hence his need to kick-start @David_Cameron.

Why Cameron feels the need to open up a personal communication channel now — with the specific aim of discussing his role as leader — can be explained by growing rumblings of discontent in the Conservative party about the direction of his leadership.

A report in today’s Guardian notes that two of Cameron’s most senior cabinet colleagues are backing a group calling for a major overhaul of his leadership strategy.

Conservative party traditionalists have been angered by his attempts to modernise party policy — which makes it all the more apt Cameron has taken to Twitter — the epitome of a modern digital communications medium — to try to silence his critics. This is ‘put up or shut up‘ in the social network era.

Update: Cameron’s second tweet, sent within hours of the first — nailing his colours to the Tory modernising mast (by announcing £140m in red-tape busting funds for NHS nurses) — is a textbook example of photo opportunity politicking: 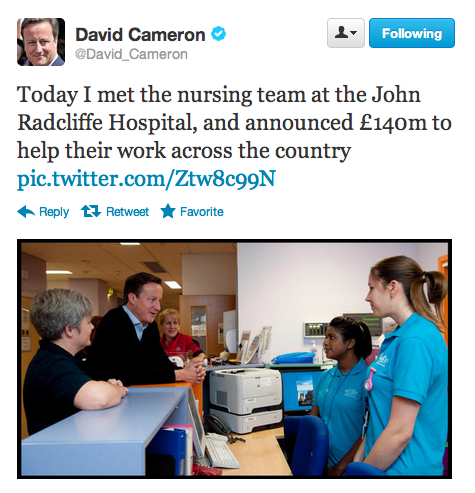