The battle for gender equality is played out on many levels, from the workplace to the playground — and, as it turns out, the world of TV viewing: a new study out from Nielsen indicates that when it comes to TV, women watch significantly more than men, but it’s also finding that the rise of connected (seventh-generation) gaming consoles like the Xbox is changing that.

Nielsen’s research indicates that although women spend almost 40 minutes more than men every day watching straight television — 4 hours, 11 minutes for women; 3 hours 34 minutes for men — men are actually spending more than twice as much time as women using gaming consoles — specifically 48 minutes compared to 22 minutes each day. Add that usage to TV time, and the gap between how much men and women actually spend in front of the screen narrows — although women are still ahead of men in TV screen time, by a space of 11 minutes.

Nielsen doesn’t break out what it is that men and women consume via the consoles — it can be anything from playing games to watching on-demand or catch-up TV services, or surfing the web.

But it does present an interesting challenge both for the advertising industry, and those working in any content service that appears (or wants to appear) on TV: if you want to use that screen to target men as much as women — then you have to think about services that work through those consoles as well as regular TV ads.

It’s not clear that we’ve seen that many solutions created so far that let advertisers (or content companies) continuously bridge content coming from basic TV services and content coming via consoles. Rather, it seems that more of the focus now is about how best to bridge services between mobile and TV screens: a dual-screen service debuted earlier this week from Brightcove, which lets users shift and command content from an iPad or iPhone to an HDTV hooked up with Apple TV, is one example of how that is taking shape. 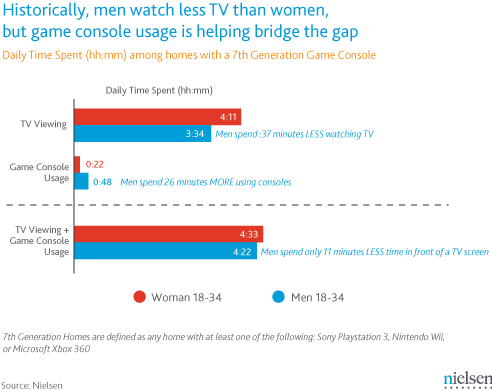