Yes, we know that tonight was a record-setting night for Twitter. The first 2012 Presidential Debate was the most tweeted about political event in company history. Whether you care or not, this is significant and worth noting.

We’re seeing a shift in not only media, but in major historical moments like political campaigns. What Twitter does is add a new dimension of participation, allowing people from all over the world to share their thoughts and feelings in real-time about something that’s really important. In this case, it’s the next President of the United States.

Here’s what Twitter had to say about tonight’s action:

As conversation on the Denver stage and on Twitter ranged from Medicare to Big Bird, there were more than 10 million Tweets this evening, making this first of the 2012 presidential debates the most tweeted-about event in U.S. politics.

The specific moments that generated the most discussion on Twitter were:
-Moderator Jim Lehrer quips “Let’s not” when Governor Romney requests a topic
-President Obama quips “I had 5 seconds” when Lehrer gives time limit
-The discussion about Medicare and vouchers

The chart below plots the pulse of conversation throughout the debate (click to see full-size): 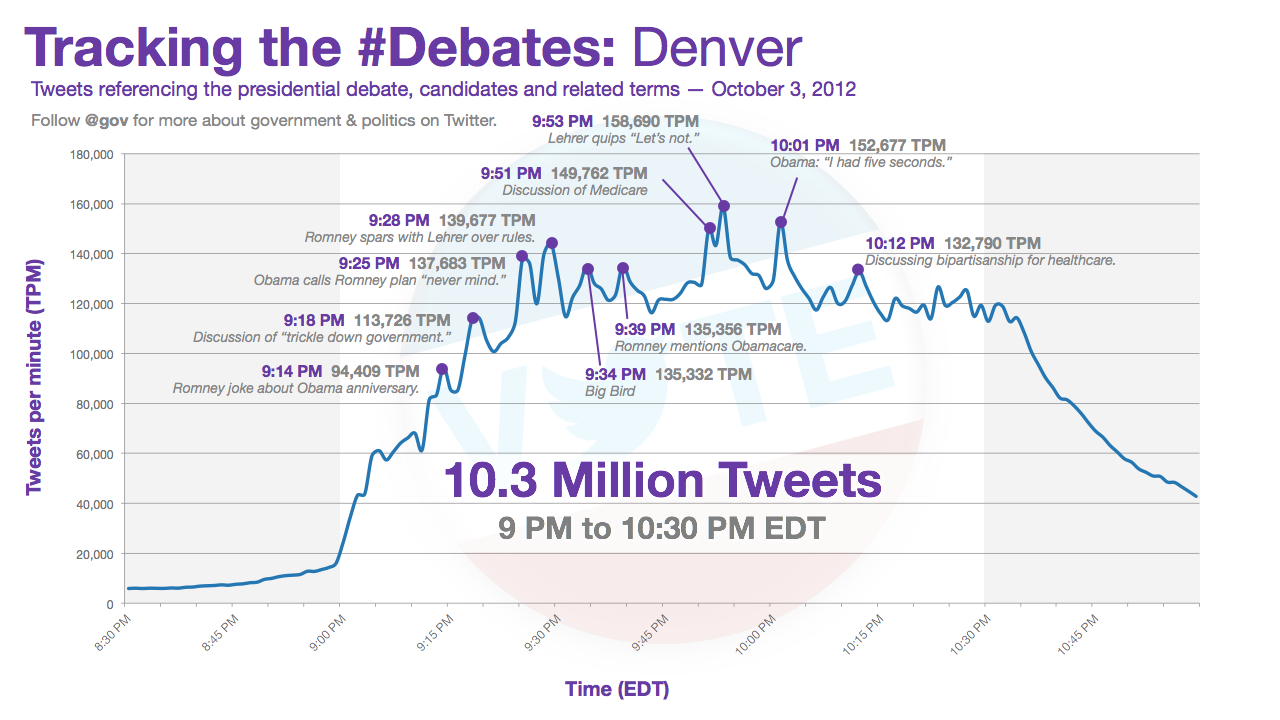 What Twitter has done is removed the political trends and influence from the hands of journalists and placed it into the hands of regular folks like my Mom and friends in Philly. You don’t need a blog to be passionate and informative, you don’t have to be someone “special” with publishing rights at a big important publication like my stupid ass to make a difference.

All you have to do is be you. Tonight, I “met” a bunch of really smart, funny and insightful people during the debate. I also found some people that annoyed and challenged me, which is equally awesome.

We don’t have to wait for FOX to tell us what was “important” during the debates, because WE get to decide…as it happens, and that better scare the shit out of networks. I don’t have to wonder why Twitter is signing media deals left and right, it’s the networks that want to work with them, not the other way around.

Watching the debate on TV with the latest iteration of Twitter was like wearing 4D glasses. I saw things I’d never seen before, heard things I’d never heard before and met people I’d never met before. The walls fell down, and we had open discussions, laughed and created Big Bird memes. Real decisions could have been on hard-hitting political agendas for voters, and we all worked it out and explained it to one another.

In my opinion, the format and moderation of the debate were pretty bad. Future debates can learn from this, because networks will see the reactions from us, the viewers, in both real-time and in chronological fashion.

I could be snarky about how Twitter touts numbers and engagement like this, but I won’t…because it gets me excited for the future of communication.