As a part of the funding, Dan Nova of Highland, whose portfolio includes other shopping-focused startups like Rent the Runway and Beyond the Rack, will now join thredUP’s board of directors. 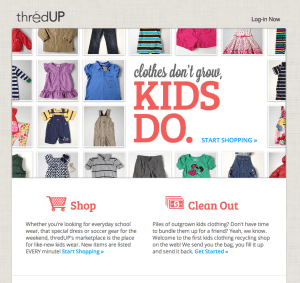 ThredUP has rapidly grown its user base since it refocused its business to online consignment earlier this year, and is now trending toward 400,000 customers. Up until March 2012, thredUP had also offered a kids’ clothing swap service as a part of its core lineup, but CEO James Reinhart says that consumers were beginning to expect more in terms of quality than an online swap could provide. “We felt that, in the peer-to-peer world, it was going to be increasingly hard to keep up with customer expectations,” he explains of the swap service’s closure. “But now that we can really control the quality and the experience, it has helped the business accelerate.”

The company is today reporting 75 percent growth in back-to-school sales, an 84 percent increase in back-to-school traffic, and a 46 percent repeat customer rate, and is averaging around 7,000 new paying customers per month. Reinhart says that since dropping the online exchange, they’ve also seen many former customers re-engage with the brand as well. The online catalog currently offers somewhere between 65,000 and 70,000 items of clothing, which flow into thredUP’s 60,000 square-foot distribution center in San Leandro, just south of Oakland, California. With the additional funding, the company plans to open an East Coast distribution center and one in the south, the former in early 2013 with the southern warehouse to soon follow. 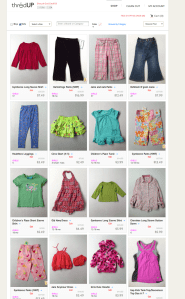 Now close to 100 employees, 70 of whom work at the distribution center and 30 in San Francisco, thredUP is looking to hire in operations and add more engineers (web and mobile). In July, the company notably brought in former Netflix executives, including Chief Operations Officer John Voris, formerly VP of Operations Engineering at Netflix, and new board member Andy Rendich, former chief service and operations officer. Netflix CEO Reed Hastings also advises the company, as does former eBay COO Brian Swette. Like Netflix, thredUP needs to increasingly automate its operations in order to scale.

“By this time next year, we’ll be putting 25,000 items online every day and building the world’s largest catalog of gently used apparel,” says Reinhart. That means the company is now learning how to take processes that have formerly been done by humans and turn them into processes that can be done by machines. This includes easier computer vision-aided tasks like identifying the clothing’s designer and size, but also more challenging tasks like deciding if an item is too worn or stained. “Those are the kinds of cool, technical problems our engineers love to solve,” Reinhart says.

ThredUP is planning to scale its business not just up, but also out to new verticals, including teen, maternity, women and men’s clothing, the first of which will go live around this time next year. But one thing it’s not getting into is the new trend of subscription-based commerce. While Reinhart says they would never rule out experimentation, he believes thredUP customers love to “find the gems themselves” and put together their own collections.

In addition to ThredUP’s plans to scale the kids’ clothes business and move into other verticals, the remainder of the funding will be put toward customer acquisition costs.